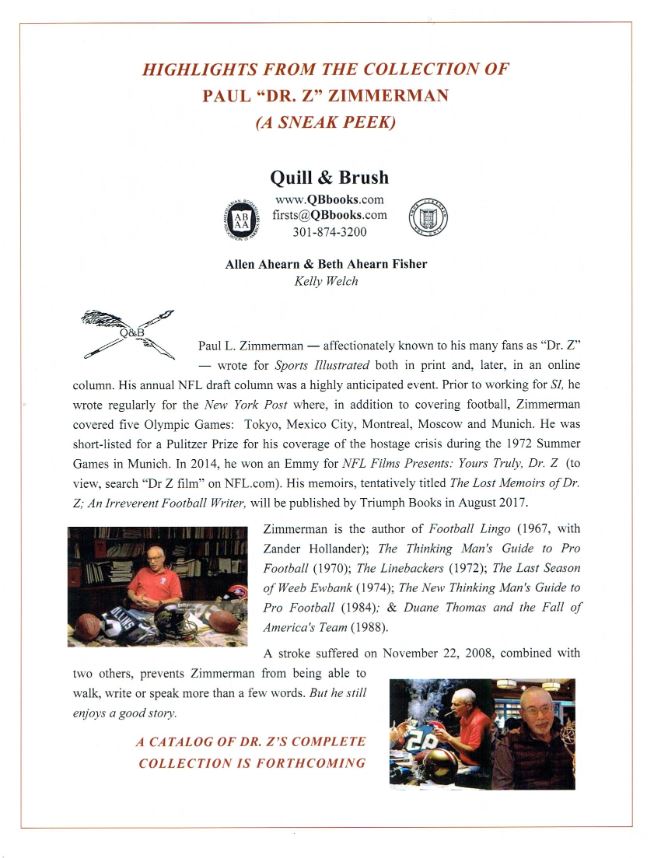 Quill & Brush is offering a catalogue of Highlights from the Collection of Paul "Dr. Z" Zimmerman. "Dr. Z" was a notable sportswriter for half a century, first with several newspapers in New York, then for 30 years with Sports Illustrated. He was much noted for predicting the outcome of football games. His legendary prediction came in 2008, when he correctly foresaw the New York Giants' massive upset of the undefeated New England Patriots in the Super Bowl. But, you saw that coming too, right? Zimmerman retired later that year after a stroke. He wrote several books pertaining to sports, but was also collecting books on the side. What we note, perhaps surprisingly, from this selection is that unlike his own books, these are fiction and they aren't about sports. Sports may be others' escape from work, but that wasn't possible for Dr. Z. Here, now, are a few selections.

Rudyard Kipling is evidently one of Zimmerman's favorite authors, based on his collection. Here is one of his books you won't know unless you are a devotee. Actually, while a Kipling book, it is not all Rudyard. The title is Quartette, The Christmas Annual of the Civil & Military Gazette, published in 1885. Kipling was an Indian-born British national, back in colonial days. His father was assigned to India. Rudyard was educated in England, but then returned to India, and was working for the Civil & Military Gazette, a newspaper in Lahore, at the time. "Quartette" refers to there being four writers. However, they were all Kiplings, his parents John and Alice, and his sister, Beatrice ("By Four Anglo-Indian Writers"). Rudyard many years later wrote that in the cold of winter, "we four made up a Christmas annual called QUARTETTE, which pleased us a good deal and attracted a certain amount of attention." Of the 16 pieces in the annual, Rudyard Kipling contributed five poems and three stories. Only two stories from these were ever reprinted in later collections. Item 8. Priced at $12,500.

Item 10 is an 1893 printing (first published in 1890) of Plain Tales from the Hills. This is certainly a special copy. It is a presentation copy, inscribed and signed by Kipling "To the Captain of the 'Indiana.'" The captain was Admiral Robley D. Evans. Facing the title page Evans has attached a portrait of Sgt. Mulvaney (a Kipling character introduced in this book) inscribed to Evans by the artist, R.F. Zogbaum. Kipling has added a poem referencing himself, Zogbaum, and Evans. It begins:

"Zogbaum draws with a pencil,

And I do things with a pen;

And you sit up in a conning tower

"'To him that hath shall be given,'

And that's why these books are sent

To the man who has lived more stories

than Zogbaum or I could invent!"

In his autobiography, Evans wrote that Kipling had come on board for breakfast one morning in New York, and a few weeks later sent him this book. The poem, naturally, was never published, other than in Evans' autobiography. $15,000.

Next up is a lot containing three books. First is A Handbook of Classical Geography, Chronology, Mythology, and Antiquities, by T.P. and W.F. Allen, published in 1861. The second is An Introduction to the Greek Language, by Asahel C. Kendrick, published in 1846. The third is Excerpta Ex Scriptis Publii Ovidii Nasonis, excerpted writings by Ovis published in 1848. What is this? Zimmerman's schoolboy books? Almost, but not quite. They are the schoolboy books of science fiction and fantasy writer H.P. Lovecraft. His signatures in the first two indicate they were written at a younger age than the more mature signature in the last volume. They also have his address and notes. The second contains Lovecraft's index of vocabulary words running down many pages. He has explained, "This book was indexed by HP Lovecraft Sun Sep 24 1905." The third has Lovecraft's notes running through the first four sections. The first book is also signed by Franklin C. Clark and dated February 25, 1865. After his father's death in 1898, Lovecraft and his mother lived with other family members, including an aunt who married Dr. Clark in 1902. Lovecraft cited Clark as an early influence on him. Item 14. $4,000.

Next is Lovecraft's "legendary still-born first book," The Shunned House. It was printed in 1928 by Recluse Press, but they never published it. In fact, it was never bound. Originally, it was to appear in The Recluse, but for an unknown reason, publisher W. Paul Cook decided to release it as a small book. He printed sheets for around 300 copies, but that is as far as it went. In 1934, Robert Barlow received 225 sets, around 50 of which he distributed, some unbound, others bound. Eventually, 150 usable sets made their way to Arkham House around 1959. Arkham House was a midwestern publisher formed by two friends twenty years earlier to specifically publish works by Lovecraft (and later similar authors). Lovecraft had died in 1937 and was virtually unknown at the time, a condition that would likely have remained were it not for the efforts of Arkham. Of those 150 sets, Arkham issued 50 sets unbound, and 100 sets bound. Item 15 is one of those 100 bound copies, finally published in 1961. $9,500.

Here is one more author Zimmerman must like considering he has a set of The Collected Works of Ambrose Bierce, twelve volumes published 1909-1912. Bierce wrote science fiction and horror, as did Lovecraft, but unlike Lovecraft, he wrote just about everything else as well. He was a journalist, writer of war fiction (he served in the Civil War), literary criticism, satire, short stories, poetry, fables, and perhaps is best known for his humor. Well, except maybe even better known for his unknown ending. In 1913, aged 71, he set off for Mexico, a sort of journalist, perhaps participant, maybe with Pancho Villa's forces, but then again maybe with the Federales. Maybe he was killed by one or the other. Maybe he died after making his way back across the border with other refugees. Perhaps he never even made it to Mexico. Maybe he killed himself and this was all a ruse to hide his suicide. Many theories have been floated, many have investigated and reached widely different conclusions. The reality is no one knows what happened to Ambrose Bierce. Fortunately, only a year before he disappeared, this set of his collected works was completed, and this is a specially bound presentation set, part of a limited issue of 250 copies, each volume signed by Bierce. Item 1. $9,500.