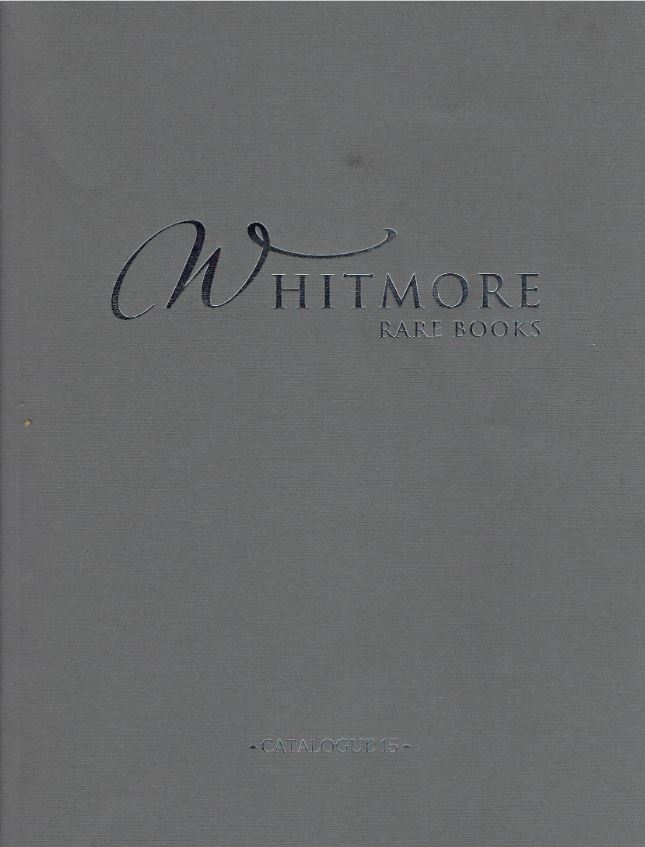 Whitmore Rare Books has issued their Catalogue 15. It doesn't have a title beyond the number, nor a description of its contents. It is filled with literature, including many great novels, but that doesn't quite explain it. So, I went to their website, which says they offer "literary first editions and other books of merit." That says it well – mostly literary works, but a few other things as well. Here are a few samples.

We begin with one of the classics of American literature by perhaps the most iconic of American authors - Mark Twain. It was, naturally, published in London. Okay, that would make sense for pre-Revolutionary days when London was the capital of America, but this was published in the year of the centennial, 1876. Twain had a habit of publishing his books in London first so as to secure the English copyright. Item 67 is The Adventures of Tom Sawyer, which also introduced the star of his sequel, and even more highly regarded book, Huckleberry Finn. This copy of the first edition is bound in a Cosway-style binding by Bayntun-Riviere. Cosway bindings featured an oval portrait inlaid in the binding. This one has a miniature portrait of Twain by Stanley Hardy inlaid in its cover. Priced at $13,750.

There is probably no more collectible series of high-quality printed books in America than those produced by the Limited Editions Club. Founded in 1929 by George Macy, his aim was to create editions of classic works featuring illustrations by the greatest artists and illustrators of the day. His greatest achievement would have to be this one, a 1935 edition of James Joyce's Ulysses. For this one, he hired the famed artist Henri Matisse to create the illustrations. Legend has it that Matisse never read the book – understandable, it is not easy to read. Instead, he was inspired by Homer's Odyssey, as was Joyce in writing the book. A total of 1,500 copies were printed, and they were to be signed by both writer and illustrator. Matisse did sign all of the copies, but Joyce stopped at around 250. Some have speculated that he stopped because he was displeased with Matisse not reading his book, but that is uncertain. Whatever the reason, copies signed by both are the hardest to find. Item 38 is one of them. $11,500.

Woody Guthrie was an Oklahoma native, a man who started out as a folksy folksinger. However, the horrors of Dust Bowl Oklahoma during the Depression radicalized him, and through the 1940's, his sentiments of solidarity with the poor, labor, and minorities only grew. His communist sympathies, not as controversial during the war when the U.S. was allied with Russia, made him a pariah with many during the Red Scare/McCarthy era that followed a few years later. It was into this cauldron that Guthrie, along with Pete Seeger, Lee Hays, and others ventured to perform in a concert in Peeksill, New York, with black singer and activist Paul Robeson in 1949. On August 27, a concert was held, leading to riots egged on by racists such as the KKK. The police did little to protect the singers. Robeson was unable to perform, so the concert was rescheduled for September 4, and the news of the riots, and little police protection, brought out a crowd of 20,000 to support and protect the singers. This time, the concert was peaceful, but police forced the singers to exit down a back road where rioters awaited them, pelting their car with stones as they tried to escape. On September 7, back home in Coney Island, Guthrie wrote the lyrics to a song he initially called Peekskill Golf Grounds. Item 31 is a single-leaf manuscript of those lyrics, so dated and signed by Guthrie. The Woody Guthrie Organization has two typewritten copies of the song, which Guthrie never recorded, dated September 9 and 10. The title was changed to Peekskill Golfing Grounds (the concert was held on the site of an old golf course). It is one of Guthrie's angrier songs, as he recalled the epithets hurled at the singers by the racists who lined their exit. $13,500.

Sir Thomas More was an accomplished political figure of early 16th century England. Today, he is best known for his novel Utopia, a picture of an ideal society, the type we would now call "utopian" as a result of this book. However, he was most known for his political role in his time. He rose through the ranks to be knighted in 1523 and an important advisor to King Henry VIII. He would eventually be elevated to Lord High Chancellor, more influential than anyone but Henry himself. Unfortunately for More, this was the time of the Reformation, which the loyally Catholic More vehemently condemned. That might have been all right except that when Henry wanted to divorce, or annul his marriage to his first wife, the Pope refused. More remained loyal to the Catholic Church, resigning his position and trying to remain reasonably accommodating in his actions. Still, he would not take the Oath of Supremacy, putting the King above the Catholic Church as the highest ecclesiastical authority, for which he was tried and executed for treason in 1535. Item 54 is The Workes of Thomas More Knyght... a collected edition edited by his nephew, William Rastell. It was published in 1557 and that date is critical. Henry died in 1547, and after his young son and successor, Edward VI, died in 1553, his daughter from that first marriage, Mary I, took the throne. The daughter of that spurned Queen restored Catholicism to the throne, abolished the oath that led to More's execution, and her retribution toward Protestants led them to call her "Bloody Mary." It would have been a safe time to publish More's writings. In 1558, the year after More's Workes was published, Mary died, and the Protestant daughter of Henry, Elizabeth, took the throne and power was reversed once again. $40,000.

If anyone qualifies as the greatest American polymath, it would have to be Benjamin Franklin. He was one of the leaders of American independence and the new nation, its greatest scientist of the 18th century, a printer, musician, and signer of the Declaration of Independence. During the years America was fighting for that independence, an admirer in England of all places wished to publish a collection of Franklin's writings. With the cooperation of Franklin and several of his friends, young Benjamin Vaughan collected his non-scientific writings and published them in 1779. The title is Political, Miscellaneous, and Philosophical Pieces, and it includes much of Franklin's political views leading up to the Revolution, including a warning he issued before Parliament in 1766 that if they sent troops to America to enforce its taxes, they would create a rebellion. Item 25. $9,500.