A Variety of Rare Americana from David Lesser Antiquarian Books 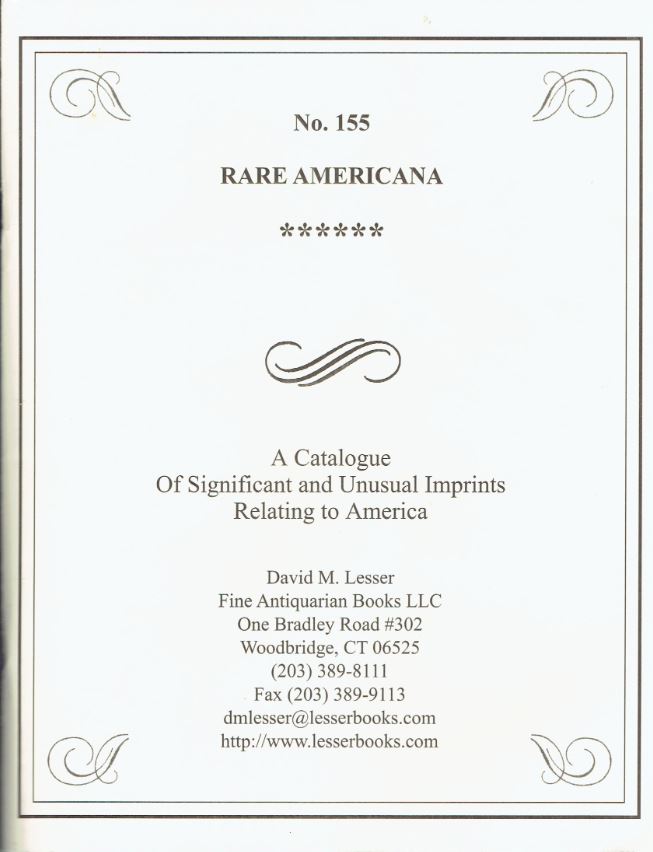 David M. Lesser Fine Antiquarian Books recently published their catalogue No. 155 of Rare Americana. It is filled with books, pamphlets, broadsides, cartoons, illustrations, manuscripts and other ephemeral items relating to historic America (and a few from the old colonial masters in England). Those who collect Americana will always find things of interest in a Lesser catalogue. Here are a few selections from this latest one.

We begin with an untitled broadside celebrating the British victory at Bunker Hill in the early days of the American Revolution. If ever there was a pyrrhic victory, this was it. Dated June 26, 1775, and printed by loyalist printer John Howe, it proclaims the British victory over the rebel forces. "This action has shown the Bravery of the King's Troops, who under every Disadvantage, gained compleat Victory over Three Times their Number, strongly posted, and covered by Breastworks. But they fought for their KING, their LAWS, and CONSTITUTION." After the patriots had driven English troops back to Boston during the Battle of Lexington and Concord, the British attacked the American stronghold on nearby Bunker and Breed's Hill. It was a fierce battle, and technically, Howe was right. The British succeeded in driving the patriots from the hill. However, the British losses were heavy, so much so that they never again attempted to drive the Americans from the hills surrounding Boston again. From there, the Americans could watch what was going on in town, and lob cannonballs at the British whenever they wanted. The British could do little in return, and the following year, concluded it was better to simply desert Boston than to continue trying to hold the town. Item 28. Priced at $20,000.

Next we have a British item, though it pertains to the horrors that led to America's most divisive internal debate, the slave trade. Item 4 is the Report from the Select Committee of the House of Lords, Appointed to Consider the Best Means which Great Britain Can Adopt for the Final Extinction of the African Slave Trade... Issued in 1849, America had long prohibited the trade in African slaves, though slavery, and the internal trading of slaves, was still quite legal. However, others continued to bring slaves from Africa to the Americas, and the British were leaders in using their navy to stop it. This report is filled with data about the trade, plus details of the horrors those enslaved in Africa faced on the journey west. "Every slave, whatever his size might be, was found to have only five feet six inches in length and sixteen inches in breadth to lie in. The floor was covered with bodies stowed or packed according to this allowance...The men were chained two and two together by their hands and feet, and were chained, also, by means of bolts which were fastened to the deck." An illustration of the ship's deck makes clear how bad the packed the ships were. The report notes other horrors the slaves faced, whippings, disease, lack of food and water. Such was the Africans introduction to the "civilized" world. $3,500.

Item 150 is an attack on the intolerance of the Know-Nothing Party with some major irony the author obviously missed. It is A Letter to Hon. N.G. Foster, Candidate for Congress in the 7th Congressional District of GA, in Reply to a Speech Delivered by Him Against the Democratic Party, and in Favor of the Know-Nothings, in Eatonton, on Thursday, 16th August, 1855. The writer was J.A. Turner, and he attacks the Know-Nothings opposition to "religious tolerance," which he notes is "the corner stone of our political edifice. You can't destroy that without pulling down the whole superstructure." Wise words worth remembering today. The Know-Nothings, who had a brief but strong run at public office in the 1850's, were anti-immigrant, those who were Catholic anyway. Turner defends the loyalty of American Catholics against charges they were loyal only to the Vatican. He praises the "great Empire" that "sprung up, almost by magic," under a half century of Democratic leadership. However, he then attacks the Know-Nothings for "pandering to the abolition influence at the North," and for favoring congressional power to limit the expansion of slavery into the western territories. While not an abolitionist party, the Know-Nothings were not pro-slavery either, being surprisingly tolerant toward black people considering their hostility toward Catholics. $600.

Spelunkers take note! Item 89 is An Account of Knoepfel's Schoharie Cave, Schoharie County, New York... by W.H. Knoepfel, published in 1853. Knoepfel thought it was a spectacular place, though perhaps he wasn't objective, considering he owned it. Schoharie County has several underground caverns. They stretch for miles. Some can be quite challenging as they are narrow and waterlogged, at times requiring crawling on one's belly to enter or move along. The best known is Howe Caverns, followed by Secret Caverns. Knoepfel's cave may have been connected to one of these, or perhaps it was Secret Caverns, I'm not quite sure. This book may provide enough clues to make the identification. $275.

In 1870, Bayard Taylor published his The Ballad of Abraham Lincoln. The very condensed epic poem (eight pages, half of which are illustrations) is an abbreviated account of Lincoln's life. It builds him into a mythical character, a man of total honesty, hard work, dedication, every other positive adjective of which you can think. Had he chopped down a cherry tree, he would undoubtedly have told his father the truth, only Abraham would never have chopped down the cherry tree in the first place. Instead, he chopped down chestnut trees to build a fence for his father's farm. Naturally, this poem is a bit of an exaggeration, but it is true in that it accurately displays the love and respect so many of his countrymen had for him ("east and west" as Taylor says, knowing "north and south" won't work). Item 60 includes a copy of this poem, but that is secondary. It also includes the four original color illustrations by Solomon Eytinge, Jr., that illustrate the poem. They further display the admiration so many held for this man. If not entirely accurate, they are certainly authentic representations of the artist's feelings. They show Lincoln meeting a crowd of people, most of them black, hammering a wedge into a log to build a fence, rowing a flat boat down the Mississippi, and taking the oath of office, also next to a crowd of people, but all of them white and male. If you would like to see a copy of this poem and the four illustrations, you can find it here on the Hathitrust website: babel.hathitrust.org/cgi/pt?id=coo1.ark:/13960/t22b9kk3x;view=1up;seq=1. Not great art, but if you too adore Lincoln, you will love them. Item 60. $5,000.