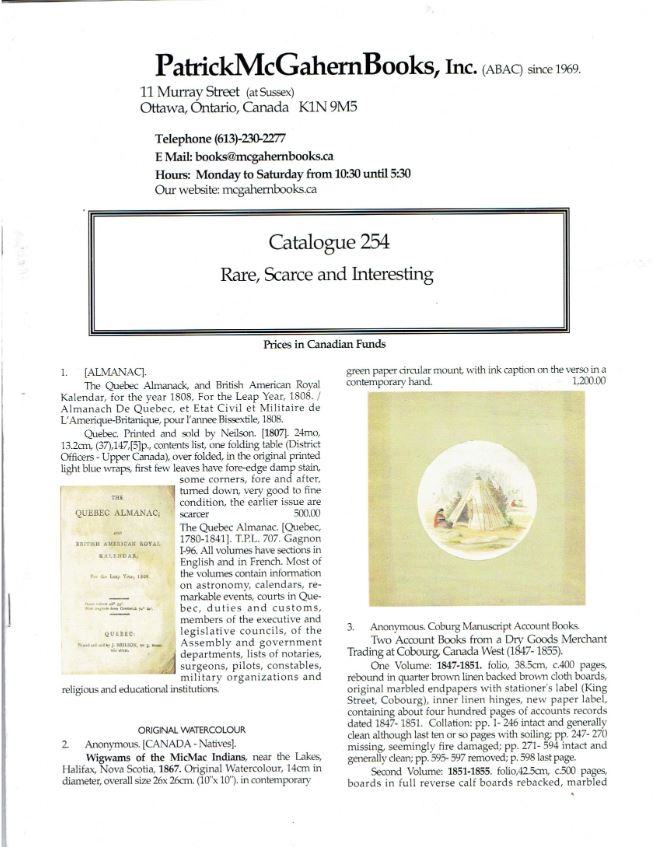 Patrick McGahern Books has issued their Catalogue 254 Rare, Scarce and Interesting. That title stumped me a bit – three adjectives but no noun. Rare, scarce and interesting what? So, I looked through the catalogue and can now report back to you. It is books about North America, particularly travels to or around the continent, and mostly during the 19th century. McGahern is a Canadian bookseller, and just about everything here touches Canada in some way. However, if a visitor traveled to the United States, but crossed the border to see Niagara Falls from the Canadian side, well that constitutes Canadian travels too. And, if not rare or scarce, I can personally testify that a visit to the Canadian Falls is interesting. Here are a few samples of the books to be found in this new catalogue.

This is one of those books that covers both sides of the Canadian-American border. It is a collection of 12 early photographs of paintings by noted Canadian landscape artist Charles Jones Way. The photographer and publisher was William Notman of Montreal. The title is North American Scenery, being selections from C.J. Way's studies, taken in 1863-64. The photographs are mounted on plates with lithographed titles. There are photographs from the White Mountains in New Hampshire, from Maine, and also from Quebec and Atlantic Canada. Item 35. Priced at CAD 1,200 (Canadian dollars, or approximately US $882).

Here is another image, this time a hand-colored aquatint of The Falls of Montmorency. These falls, in a park in Quebec City, are at the end of the Montmorency River, where it spills into the St. Lawrence. They are 275 feet high, which is actually a much steeper drop than Niagara Falls, though naturally they aren't nearly so wide. The view is from across the river, where people have gathered to enjoy the view. It was drawn by Lt.-Col. James Pattison. This image was originally published in 1833 by the London high-quality printer Ackermann & Co., though this is a restrike, likely from around 1870. Item 11. CAD 2,500 (US $ 1,835).

Next up is an account from a British national who traveled extensively on both sides of the border shortly after the War of 1812. Lieut. Francis Hall provided his findings in 1818 in Travels in Canada, and the United States, in 1816 and 1817. Hall arrived in New York in 1816, journeyed up the Hudson River to Albany. From there he proceeded overland to Canada, visiting Quebec, Montreal, Kingston, and Niagara Falls. Then it was back to America, visiting Philadelphia, Washington, and then down south as far as Charleston. He stayed with Jefferson in Monticello and was most impressed by him, though he was less enthused about the American character in general. An appendix contains an essay on American slavery. Hall's account was described by Sabin as "shrewd, clever, humorous, and without prejudice." Item 18. CAD 450 (US $330).

Item 21 fits the category of "Indian Captivity," though this is not a typical one: A Narrative of the Captivity and Adventures of John Tanner, (U. S. Interpreter at the Sault De Ste. Marie,) during thirty years residence among the Indians in the Interior of North America. It was told to Edwin James, the book's editor, who published it in 1830. Tanner was taken prisoner from his Kentucky home in 1789 at the age of 9 by Shawnees. They clubbed him and left him for dead, but he was adopted by the Ottawa tribe. He spent 30 years with them before returning to white society. To say the least, he was a changed man. Tanner provided a detailed account of Indian life in the northern woods of Minnesota, Michigan, and Ontario. He tells of native relations with the Hudson's Bay and Northwest Companies and the Red River District of Canada. He speaks of the debilitating effect of alcohol on the Ottawa. Field says, "His relation of his life among the Northern Indians is probably the most minute if not authentic detail of their habits, modes of living, and social customs, ever printed. The perils and privations in which they constantly exist, the tribal distinctions, and family associations and quarrels, the hunter’s painful struggles to overmatch the cunning and instinct of the animals upon which he must feed or starve, and the labor of the squaws, alternated with days and weeks of gnawing famine, awaiting his return, are all minutely and vividly related." Tanner returned to his family, and worked in Sault St. Marie, but he was unable to adjust to white society. People made fun of him in Sault St. Marie, and he ended up attempting to kill James for publishing this book. Henry Schoolcraft said that he didn't believe Tanner's account, though he was prejudiced against him. Tanner assaulted Schoolcraft and murdered his brother. Unable to cope, Tanner returned to the woods where he later died. CAD 2,500 (US $ 1,835).

George Harold Baker was member of the Canadian Parliament, elected from Brome (Quebec) in 1911. His father was an M.P. too. The younger Baker never got much of a chance to develop a reputation in politics. In 1915, he enlisted to fight in the First World War, and the following year, he lay dead, just 38 years old. He is one of the many to lie in Flanders Fields. Item 12 is a privately printed tribute to Baker published in 1917: A Canadian Soldier. George Harold Baker, M.P. Lieutenant Colonel 5th C.M.R. Killed in action at Ypres, June 2nd, 1916. CAD 500 (US $366).