Winston Churchill and the Second World War from Peter Harrington 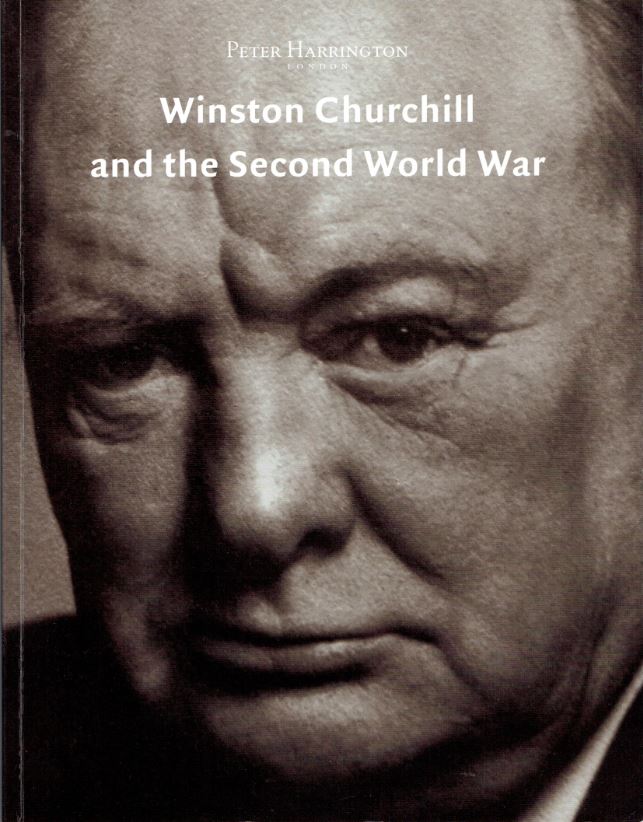 Peter Harrington of London has published a catalogue of Winston Churchill and the Second World War. I initially misinterpreted this title, thinking it much more restrictive than it is. It does not cover only Winston Churchill's role during the Second World War. Rather, it covers all of Churchill's career plus the Second World War, including much material from the war not directly connected to Churchill. Indeed, it includes items pertaining to the other allies, Germany, and even far off theaters in Asia. What's more, the Second World War is not limited to half a dozen years. It also covers events leading up to the war, sometimes almost two decades earlier, to the changes that arose from the war in the years thereafter. That is far more ground than I at first thought. Here are a few of the items pertaining to these two subjects found in this new catalogue.

Most collectors have to painstakingly build their collections over years. For those looking to build a Churchill collection instantaneously, Harrington has an amazing opportunity. Not only is this an almost complete collection, it is likely as fine a collection as you will ever see. It was compiled by collector and bookseller Mark Weber, doing business as "The Churchill Book Specialist" from his home in an unlikely place I doubt Churchill ever visited – Tucson, Arizona. Weber, who died in 2016, was in business almost 30 years and handled one of the world's largest inventories of Churchill books. He kept the best copies for himself. This collection includes all but two "elusively rare" items from the primary texts of a Churchill corpus (Mr. Brodrick's Army and For Free Trade). There are 22 titles in 50 volumes. All are in original cloth and have original dust jackets where issued except The River War. Photographic plates and maps are all present, and they are mostly in "exceptional condition." The collection includes one of only two known copies of Lord Randolph Churchill in the dust jacket, one of only three such copies for Liberalism and the Social Problem. Titles range from a first edition, first state of Churchill's first book, The Story of the Malakind Field Force (1898), to A History of the English Speaking People (1956-58). Harrington quite accurately describes this as "a once-in-a-generation collecting opportunity." Item 1. Priced at £110,000 (British pounds, or approximately $141,145 U.S. dollars.

Next we have what must be Churchill's most unusual book, and not because this copy is a French translation. The title is Savrola (same as in English), unusual as it was Churchill's one foray into fiction (of course his opponents undoubtedly thought some of his political works were fiction too). Additionally, it is unusual in that it is a notably artistic book for Churchill, featuring illustrations by André Collot. It is one of just 12 copies of this second French edition (1950) to contain two inserted original illustrations. Despite its elegance, the edition is often overlooked by English-speaking collectors because it is in French. Savrola is the story of a revolutionary in the mythical country of Laurania. The dictator, suspicious of Savrola, sends his wife to seduce Savrola so he can learn more. Really? Wouldn't he just kill the man? Anyway, you can guess what happens next. Hopefully, Churchill didn't telegraph his war plans as much as he did the plot of this story. The two fall in love, the dictator is overthrown, but Savrola is forced to flee anyway when his friends turn on him. Some believed Churchill saw himself in this heroic but wronged protagonist (the book was originally published in 1900 when he was a young man). Churchill was happy to see this early work forgotten later on, writing, "I have consistently urged my friends to abstain from reading it." Item 7. £1,500 (US $1,928).

Item 18 is a signed typescript with extensive handwritten annotations of an article written by Churchill almost a century ago, that is as timely today as it was then. Written in 1931, it is titled The United States of Europe. It was written for the Hearst newspapers in the U.S. Churchill argues for European unity, noting that while the states of the Old World "don't want to have it," Europe has been united in the past, such as during the Roman Empire. Perhaps, he surmises, Europeans will look at the unity of the United Sates and be envious. He felt that free trade and interaction between borders would be healthy for Europe, and the interconnectedness good for peace. However, he incorrectly believed that "the horrors of Armageddon are our present guarantee of peace." Churchill was seriously wrong on that one, which made him an even stronger advocate of European unity after the war to preserve the peace. However, he did not see Britain as part of the European union, seeing the English instead being more closely tied to the English-speaking word, which at the time included not only North America and Australia, but the British Commonwealth as well. Today we wonder whether that union Churchill so strongly advocated to preserve European peace is about to disintegrate. £30,000 (US $38,550).

Next we have General (later President) Dwight D. Eisenhower's 1948 look at the war effort he commanded, Crusade in Europe. This first edition was printed in 1,426 copies, but this is one of just 35 copies bound for presentation. Eisenhower has inscribed it "For The Prime Minister of Great Britain and Mrs. Atlee." Oops. Eisenhower misspelled Clement Attlee's last name. Unusually, Eisenhower inscribed this copy on behalf of himself and his wife, Mamie. Attlee had served in the British Army during the First World War during a campaign strategized by Churchill, so despite being the leader of the opposition Labour Party, they worked well together during the unity government of the war. Attlee was Deputy Prime Minister. However, in the election of 1945 after the war ended, Churchill's Conservatives were surprisingly defeated and Attlee took over as Prime Minister. While Attlee's party promoted a far greater social role for government than would have appealed to Eisenhower, they were in lockstep on foreign policy, Eisenhower's primary concern. Attlee was strongly anti-Communist and a major supporter of the new NATO alliance. Item 67. £18,750 (US $24,050).

Here is a remarkable account by a remarkable man, Jan Karski: The Mass Extermination of the Jews in German Occupied Poland. Note Addressed to the Governments of the United Nations on December 10th, 1942... published in 1943. Karski had served in the Polish military and diplomatic corps when he was captured by the Soviets in 1939, when the Soviet Union and Germany were still cooperating to carve up Poland. In an exchange, he was being transferred from Soviet to German captivity by train when he escaped. He then went to work for the Polish underground, using disguises to find out what was really going on. He did, smuggling out information to England and then the United States. He was perhaps the first to let the world know about the mass exterminations taking place in the Nazi concentration camps. He met with British Foreign Secretary Anthony Eden and numerous Americans, including President Roosevelt. What he met with was mainly indifference, disbelief, or the view that nothing could be done about it. In later years, he condemned the inaction of both government and church authorities (he was himself a Catholic), noting that many of the Jews who survived did so because of courageous actions by individual European citizens, not governments or churches. Item 104. £2,500 (US $3,208).