A Variety of Exceptional Material from Raptis Rare Books 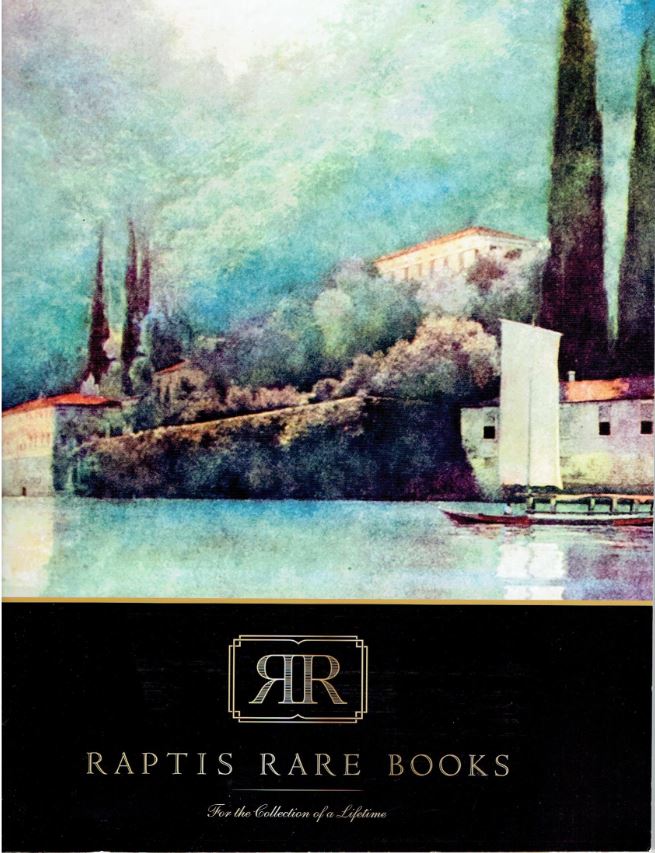 Raptis Rare Books recently issued a new catalogue. While I have not been able to locate a title, it does provide a useful guide to what is inside – a table of contents. Here are the subjects covered within: New Arrivals, Modern Literature, Children's Literature, History & World Leaders, Philosophy & Religion, Science & Exploration, Economics & Finance, Art & Architecture, Sports & Leisure. My guess is you will recognize most of the books or their authors. This is important and highly collectible material, condition generally excellent. Serious collectors in a variety of fields will appreciate what is offered. Here are a few samples.

We begin with a work of which Printing and the Mind of Man said "No other work of the sixteenth century equals it." The author was Andreas Vesalius, who quite literally, looked inside ourselves as no one had before. Vesalius was a physician and professor at the University of Padua who studied human anatomy. At the time, physicians still relied upon the teachings of Galen, 1,400 years old, much of which was speculative rather than based on observation. In Roman times, Galen was only permitted to dissect animals, not humans. Vesalius had the advantage of a local judge making the bodies executed criminals available to him for dissection, which he was willing to undertake. The result of his investigations was this book, De Humani Corporis Fabrica Libri Septem (on the fabric of the human body). The book not only contains Vesalius description of the human anatomy, but over 200 woodcut illustrations. The accuracy of both illustrations and text was exceptional. Printing and the Mind of Man further explains, "Galen was not merely improved upon, he was superseded; and the history of anatomy is divided into two periods, pre-Vesalian and post-Vesalian." Offered is a first edition, published in 1543. Item 30020. Priced at $145,000.

Next is an autographed personal letter from Mark Twain to Bram Stoker, best known for his novel Dracula. You might assume this is a case of one notable author writing to fellow writer, but that was not the case. The letter reads, "My Dear Stoker: It is a wonderful picture. I have never seen one of Irving before that could at all compare with it. I don't know how to thank you enough, Sincerely Yours S.L. Clemens December 27, 93." While he wrote other books, Stoker's by far best known work is Dracula, and that was not published until 1897. Rather, Stoker was better known at the time as the business manager of the Lyceum Theatre of London and the personal assistant of famous actor and manager of the theater Henry Irving. It was in this role that Stoker accommodated Twain with a picture of Irving, for which the latter was very grateful. Item 31008. $6,000.

Here is another letter signed by a most notable American, and one that seems very odd today. The writer was President Abraham Lincoln, and in the midst of his challenging presidency, he seeks a free one-way railway pass for a man he didn't even know. It is amazing what was expected of presidents in those days. The recipient was some sort of medical volunteer during the Civil War, and as such, Lincoln figured he deserved a free train ride home. So, he wrote a letter in hopes of securing one, though his tentative endorsement of the recipient himself and lack of knowledge of what he did indicates he knew nothing about the man. Writes Lincoln, "I suppose this man has been doing something for our sick soldiers, and I should think it would be no more than fair that he should have a Railroad pass to his home in Albany, New York. A. Lincoln. July 2, 1862." Item 32009. $16,000.

If that is a strange message from a president, this one is stranger still. It comes from Richard Nixon, and it is considerately inscribed by a President whose national reputation wasn't much better than that of Lincoln in the South. Writes Nixon, "To Ward Thompson, with appreciation for his service to the nation and best wishes for Christmas 1978." Actually, it is a tribute to Nixon that he wrote such a polite letter to Thompson, rather than saying what he must have truly felt about the man. Thompson was an IRS agent. Prior to the more notable Watergate scandal, Nixon was involved in one involving his taxes. Nixon opened his tax returns to the public, starting a tradition that was in place all the way until this most recent election. Nixon paid a price for his openness - $67,000 to be exact. Further examination revealed that Nixon owed $67,000 in taxes. Thompson was the agent put in charge of auditing Nixon's taxes, and had to receive an authorization from the IRS (a photocopy is included) to ask Nixon for his autograph. The inscription comes within a copy of Nixon's 1978 book, The Memoirs of Richard Nixon. Item 4510. $2,200.

It probably wouldn't be all that surprising to hear that the all-time best selling children's book is The Tale of Peter Rabbit. What is the second best selling such book? Raptis provides the answer, and it was a major surprise to me. Perhaps it shouldn't have been, as I had a copy when I was young and so did my children, but it is still not one that immediately comes to mind. The answer is Pat the Bunny, by Dorothy Kunhardt. It is not the writing that makes this book so popular, but its interactive nature, designed for the youngest of children. It contains a few very simple things a young child can do, and when you are very young, they are exciting. You can, as the title says, pat the bunny, which is to say touch a piece of cotton shaped like a bunny. You can peekaboo with a mirror, feel Daddy's scratchy, unshaven face, put your finger in Mommy's ring, or poke a ball that squeaks in return. The presence of the ball reveals this to be a first edition, first issue from 1940. The ball was quickly replaced by perfumed flowers as the squeaker regularly failed. Sadly, I have never seen a copy listed where the squeaker still worked, and, alas, that is true of this one too. Item 30007. $5,500.

Of all the comic book superheroes, none has matched the reputation of the original, Superman. The Man of Steel first appeared in a 1938 issue of Action Comics, and this creation of Jerry Siegel and Joe Shuster has made his way to books, television, and the big screen in the years since. In 1942, he found himself in the pages of a book, in this case written by George Lowther and illustrated by Shuster. The title is The Adventures of Superman, and this copy is inscribed by Lowther. Collecting Superman in books is much less intimidating than collecting him in comics, as that first edition of Superman in comic book form can cost you almost 100 times what the book sells for. Item 32042. $4,000.