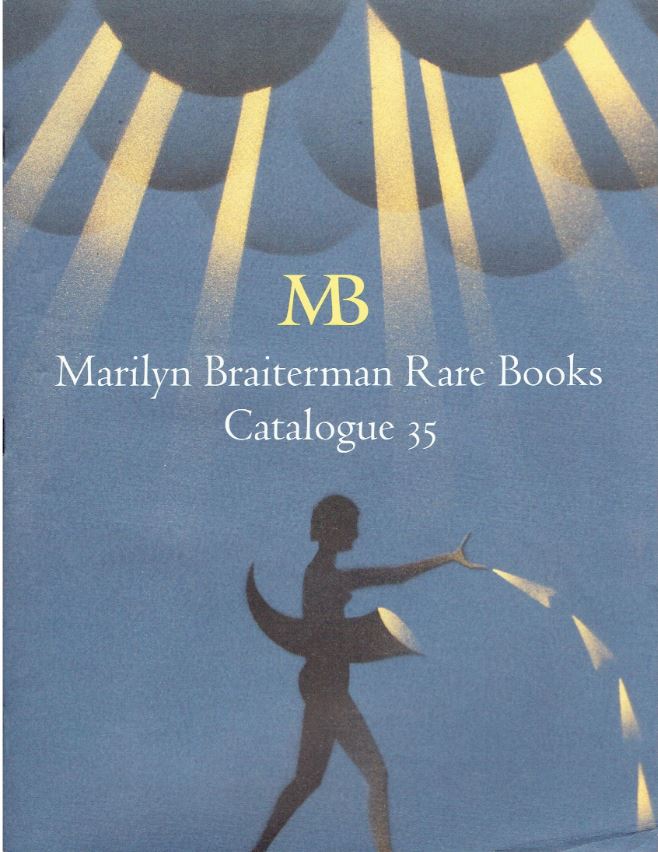 Art and architecture from Marilyn Braiterman.

Marilyn Braiterman Rare Books has released their Catalogue 35. While there is no further title or description of the contents, we note that the material primarily relates to architecture and some form of the arts. We will include making cocktails as an art form. Dates are mostly 19th and 20th century, though some items are considerably earlier. Illustrations are a major feature of most of these works. Here are a few samples.

We begin with a folio book of 13 engravings of Ponti-Antichi... (Antique Bridges) created by 19th century Italian artist Antonio Aquaroni of Rome. Aquaroni was noted for his ability to capture sites accurately in detail, leading to his creating numerous Roman views on behalf of the Vatican. This collection of 13 images depicting eight different bridges was published in 1836. Item 1. Priced at $7,000.

Next we have some more old images of Rome, this time from one of the earlier books in this catalogue, dated 1685. These are of Romanorum Fontinalia... (Roman Fountains). This is the work of Giovanni Battista Falda, a Nuremberg printing of images most of which had appeared ten years earlier under a different title in Rome. It contains 42 engraved plates, 40 of which are double pages. Most of the images display surrounding buildings and gardens as well. This is also a folio size book with the images designed to accurately reproduce the bridges Falda viewed. Item 24. $5,750.

Here is a fashion statement for ladies' feet, Ladies' Dress Shoes of the Nineteenth Century, the work of T. Watson Greig of Glencarse, published in 1900. Greig has created 22 full page color lithograph plates, all but two containing three nearly life-size illustrations of women's shoes per page. Many attribute the shoes to the women who wore them, such as actresses, singers, dancers, and women of fashion. Braiterman notes, "Most could be worn with great effect today." The images are realistic representations. Item 30. $7,500.

Next up is a look at the construction of what was once the tallest building in the world: Empire State: A Pictorial Record of Its Construction. It was published in 1931, the year the Empire State Building was completed. I can remember visiting it while young when the Empire State still held its title as the tallest building. It held that record for almost 40 years, and while it is still just as tall, it trails many others today. There's a tower in Dubai that would require putting two Empire State Buildings on top of each other and then some to equal it. This book provides a record of the building of the skyscraper, from the tearing down of the old Waldorf-Astoria that once occupied the site to the many phases of construction leading to its completion. One color and 24 black-and-white illustrations were provided by Vernon Howe Bailey. The cover features an embossed white image of the Empire State Building on a blue background. Item 2. $750.

This takes us to another New York landmark – Rockefeller Center. Begun the year before the Empire State Building was completed, the original fourteen structures comprising Rockefeller Center were finished in 1939. While not the tallest, it was the largest private building project up to that time. This book provides the history of the project as of 1932 and comes with illustrations of its progress and plans. A tipped in sheet notes changes in the plans made after 1932. Notably, there was the suspension of plans to include the Metropolitan Opera House. The Opera House had been the primary tenant in mind when John D. Rockefeller put the project in motion, but with the advent of the Depression, the Opera House was no longer willing to meet Rockefeller's financial demands. Item 56. $350.

In 1913, likely the most important art exhibition America has ever seen took place at the Armory in New York, today remembered not by its official title but simply as the "Armory Show." It featured modern art, then sweeping across Europe, but mostly unknown in America. Art would never be the same. Among the styles displayed was cubism, its best known proponent being Picasso. With sharp angles creating cube-like images, it was anything but realistic. The artists looked at objects, humans included, from different perspectives, and combined them in one drawing. To some, it opened their minds to new ways of seeing reality. To others, it looked like something created in a kindergarten art class. Beauty is in the eye of the beholder. Among those unimpressed was the husband and wife team of Mary and Earl Lyall. Together they produced this bitingly satirical book, The Cubies' ABC. Mary did the writing, Earl the illustrations. It was their only book. Regardless of how you feel about the art form, this is one amusing book, a most clever put-down of this revolutionary (or, to them, revolting) new art. The Cubies are three pyramidal-shaped children (the Lyells settled for a more sparse three sides rather the four of a cube). They are devoted followers of cubism, and their shallow and exaggerated worship of the art quickly reveals their creators' distaste. Item 43. $7,950.