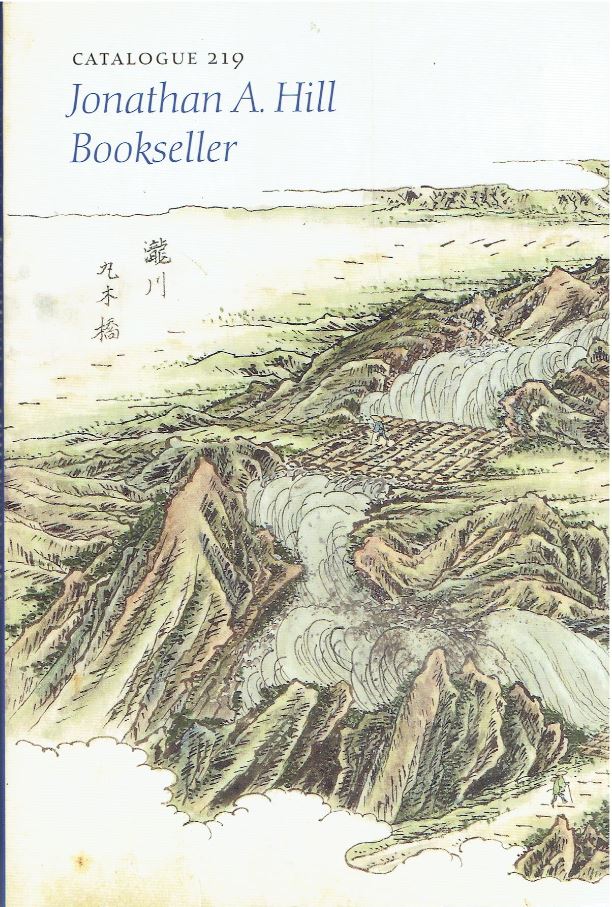 Catalogue 219 from Jonathan A. Hill Bookseller.

Jonathan A. Hill Bookseller recently issued their Catalogue 219. It is divided into four topics, with no discernible connection other than these are the fields in which Hill is expert: (1) Science, Medicine, & Natural History; (2) Japanese & Chinese Books, Manuscripts, & Scrolls; (3) Military Books; (4) Paper. What might be found in the first three topics is obvious, but as to "Paper," what you will find is a selection of books dealing with paper making and marbling. The vast majority of what you will see easily qualifies for the description "antiquarian," except within the subject of "Paper," which is heavily weighted to twentieth century material. The items here are all of significance, the condition excellent for their age, all highly collectible books and manuscripts. These are a few samples.

We begin with an encyclopedic work by Simone Maioli, Bishop of Volturara, Dies Caniculares... (Dog Days). This is a 1600 second edition (the first was published in 1597). We will leave it to Hill to describe some of the material found within its pages: "astronomy; insects; birds; quadrupeds; fish; rivers, lakes and seas; fountains and springs; mountains, fossils, volcanoes and geology; metals and minerals; herbs and plants; demonology; asbestos in Cyprus; and other subjects such as werewolves. There is much on America." Of particular note is that Maioli was mentioned by Charles Lyell as an early pioneer in geology. These were days long before anyone understood the history behind layers in rocks, or even more, the existence of fossils. Maioli believed that much of what we see was caused by volcanoes. Stratified rock formations he attributed to successive volcanic eruptions. The mysterious presence of fossil sea shells on land, even on high mountains, that some attributed to Noah's flood, was explained by Maioli as caused by volcanic explosions under the sea throwing the sea shells high in the air. Item 23. Priced at $3,500.

Next we have a book about fossils, although the book is most notable as a first for photography, and the author notable as the first in the field of medical anesthetization. The book is Remarks on Some Fossil Impressions in the Sandstone Rocks of Connecticut River, published in 1854. The author was John Collins Warren, M.D. Dr. Warren is famed as the first physician to perform surgery on a patient fully under anesthesia, in this case ether. He did not invent the substance. That credit goes to dentist W. T. G. Morton, but Warren was the first to use ether in surgery, removing a tumor from the patient's jaw. In his later years, Warren became interested in fossils and geology, developing a large collection of specimens. Warren found fossil footprints near Greenfield, Massachusetts, the "impressions" mentioned in the title. Ironically, or prophetically, he described them as "bird-tracks." They were actually dinosaur tracks, the irony being that a century and a half later, paleontologists realized something never before imagined – birds are just evolved dinosaurs. This book is notable as being the first American book to contain a photograph. It is a folding salt print of a slab of rock containing fossilized animal tracks. Warren notes that this new invention allows the tracks to be displayed "with perfect accuracy." This copy is inscribed by Warren to scientist "Franklin Bache, M.D." Franklin Bache was the great-grandson of Benjamin Franklin. Item 37. $1,000.

Here is an unusual title - De l'Electricite des Vegetaux. That translates to "the electricity of vegetables." This is not a book about a new source of renewable energy, but one of the theories of French clergyman Pierre Bertholon. He speaks of the use of electricity in promoting the growth of plants. The subject may seem a bit of a stretch today, but the book was published in 1783, when electricity was new and people imagined all sorts of magical things it could do, including numerous medical cures. Bertholon was respected in his time, and friendly with a man whose writings on the subject have held up better, Benjamin Franklin. Bertholon introduced one of Franklin's great inventions, the lightning rod, to southern France at a time when others laughed at the idea. Item 2. $1,500.

Next we have a highly illustrated 19th century Japanese manuscript on the old Chinese art of face reading. According to this theory, you could determine a person's personality by reading the features of his or her face. It is based on the five Chinese elements of earth, metal, water, wood, and fire. These somehow affect the shape and lines in a person's face to display their personality. Hill explains, "wrinkles under the eyes means the man has problems with women, bushy eyebrows brings wealth, hairy ears means longevity, big ear lobes commands respect from others, circles under the eyes denotes health problems, a certain shape of eyebrow means a lonely life, certain kinds of wrinkles means a long life or problems with the relatives or wife, 'strong' eyes on a woman means she will be successful, big ear lobes on a woman means she will dominate her husband, a woman’s red nose means she has many illnesses, blueish ears on a woman means she will have three husbands, facial discoloration means the woman will lose everything in a fire, blackened lips suggests the woman is sinful, etc." The illustrations include five faces displaying the qualities of the five elements, followed by images more detailing the characteristics displayed. This sounds like something akin to the western practice of phrenology. Item 42. $6,500.

America's twentieth century expert on the art of papermaking was, undoubtedly, Dard Hunter. He was skilled at producing handmade paper, and could do just about everything else associated with producing books, including type designing and setting, printing, binding, and writing them. Rather than singling out one of his books, we will note that Hill has a selection of Hunter's titles – eight in all. His books focus on the art of early papermaking in general, and papermaking in certain specific countries.