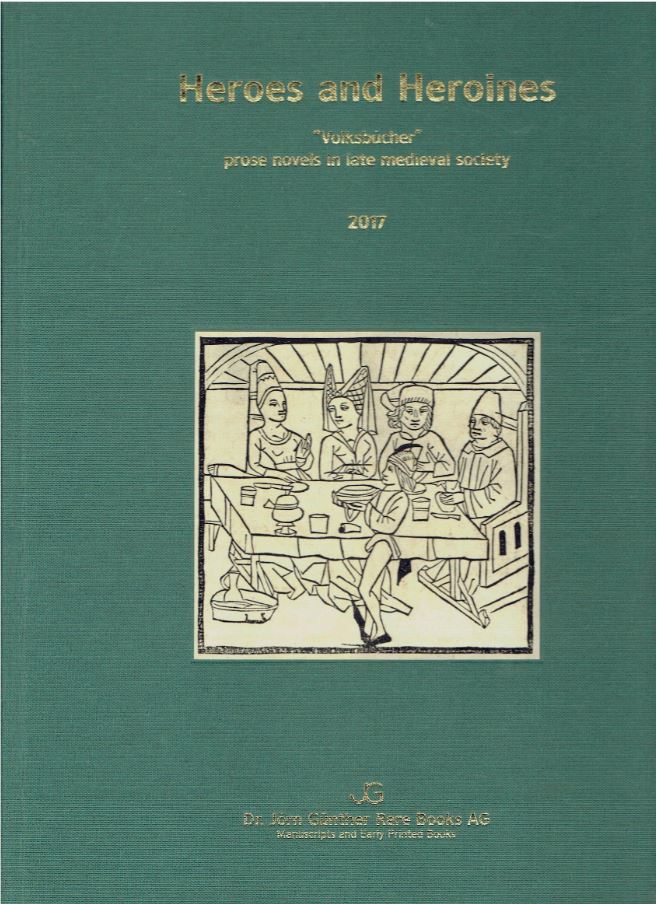 Dr. Jorn Gunther Rare Books of Basel, Switzerland, has issued a catalogue of Heroes and Heroines, "Volksbucher" prose novels in late medieval society. "Volksbucher" are kind of hard to define. They appear around 1470 as printing starts to pick up in larger volumes. It literally means people's books, which is to say books that were now available to a wider segment of society. That is not to say that farmers and the poor were reading the latest novels. It was still limited to people of education and means, but no longer just a select few, primarily clergy, as it had been. Besides which, the poor couldn't read anyway.

While novels were a major part of what is thought of as "volksbucher," it included all sorts of material, fables, almanacs, guides, whatever people wanted. It is somewhat like defining "literature" – novels, sure, but, depending on your definition, almost anything else. One more thing should be noted about the development of people's books. It changed the world. Locked in a millennium often referred to as the "Dark Ages," books for the people meant reading, learning, discovery, a reawakening or Renaissance.

Here is one more point to note about this catalogue. It is a spectacular production. Hardbound, quarto, heavily illustrated, detailed in text, it is a large book, not a typical catalogue. Forty books are offered in 200 pages. Twenty-six of them are items of incunabula. The most recent is dated 1590. This is a special catalogue of very special books.

We begin with the one book that isn't really a "Volksbucher" in this catalogue, though it would become one when printed a few decades later in 1490. It is the one manuscript in the catalogue, and it predates 1470, even slightly beating out Gutenberg's Bible. The scribe has identified himself as Johannes Mor of Constance (southern Germany), who wrote in a Bavarian dialect, and dated the manuscript 1453. The book is titled Das Buch der Naturlichen Weisheit, a German translation of Speculum Sapientiae, which has been attributed to St. Cyrillus. There are a couple of Cyrilluses or St. Cyrils who are candidates to be the Cyrillus who was listed as the author of these ancient fables, but it really doesn't matter. Most likely, the author was none of these, but Boniohannes de Messina, who lived in the 14th century, substantially later than the Cyrils. These fables were not so much children's stories, though they used anthropomorphic animals to relay their tales. They are basically short morality plays, intended to teach Christian lessons. This version of the fables contains 84 illustrations, featuring intermingling humans and animals which illustrate the stories. The artist is unknown. Item 1. Priced at €730,000 (euros, or approximately $782,926 in U.S. dollars).

Item 4 is the second German edition of a Christian tale with a most unlikely source, Die hystori Josaphat und Barlaam. It was printed sometime between 1476-1480, though the story goes back many centuries earlier. Josaphat's father, Avennir, was a king in India, a pagan, who received a prophecy when his son was born. That prophecy was that Josaphat would become a Christian. That did not sit well with the King. He decided to isolate his son from all outside influence. Despite Avennir's precautions, Josaphat met a hermit, Barlaam, who taught the young prince about Christianity. True to the prophecy, the young man became a Christian. This did not please the King, but after lengthy debates with his son, Avennir converted too. He then turned over his throne to his son and the old King went off to live the life of a hermit. In time, Josephat abdicated as well, and went to live in seclusion with his old mentor, Barlaam. What is remarkable is the source of this legend. The story closely parallels that of the Buddha. It had developed in the first millennium in the eastern edges of Christendom, where it intersects with the Buddhist world. The Christianized version appeared, made its way east to Georgia, and later all the way to western Europe. It was once a very popular story, but has since faded from common view. This edition contains 64 woodcuts illustrating the tale. Item 4. €270,000 (US $289,589).

Here is another old tale, a French "chanson de geste" ("song of heroic deeds," a type of medieval French epic poem). It was translated to German by Countess Elisabeth of Nassau-Saarbrucken in 1437, but this first printed edition was published in 1514 under the title Ein schone warhaftige Hystory von Keiser Karolus sun genant Loher... It is the story of Loher and Maller (Lohier et Mallart in the original French), even more complicated than that of Josaphat. Loher, firstborn son of Emperor Charles, is banished from the court for seven years. With his friend Maller, he goes off to Constantinople, fights for the King, and marries his daughter. She gives birth to his son, Marphone, but dies during childbirth. He moves on to Rome, fights for the Pope, but then his father dies, and Loher being absent, his younger brother Ludwig is crowned King of France instead. The Pope comes up with a solution to this dilemma. Ludwig remains King of France, but Loher becomes Emperor of Rome. However, some French royal counselors are not satisfied with this solution. To protect the crown from Loher's heirs, they capture and castrate him. He shall have no heirs. Of course, we know what they don't – Loher already has a son. With the help of that son, Loher defeats the traitors, accidentally kills Maller and has to fight his relatives, reconciles with his brother, goes on to have more adventures, and the book then turns to further adventures involving Ludwig and others. This first edition was published by Johannes Gruninger and contains 37 woodcut illustrations. Gruninger cheated a bit, using woodblocks he had used to illustrate other books. Item 28. €25,000 (US $26,813).

This next story may be somewhat legendary, but it is about a real person. Item 18 is a 1490 third edition of Des pfaffen gerschicht und histori vom kalenberg, by Philipp Frankfurter. It is about the Pastor of Kalenberg. The inspiration for these tales has been identified as Gundaker von Thernberg, who had been a chaplain for Otto IV the Merry, Duke of Austria, during the 14th century. As his name suggests, Otto ruled a festive court. Gundaker fit right in, as he played the role of jester as well as priest. Apparently, he was fond of playing dumb and asking a lot of questions. However, the questions often made the other party look the more foolish. For Gundaker, he evidently felt he was providing learning experiences, although the lessons may have made the students at times uncomfortable. €240,000 (US $257,412).