Books from the American West from Old West Books 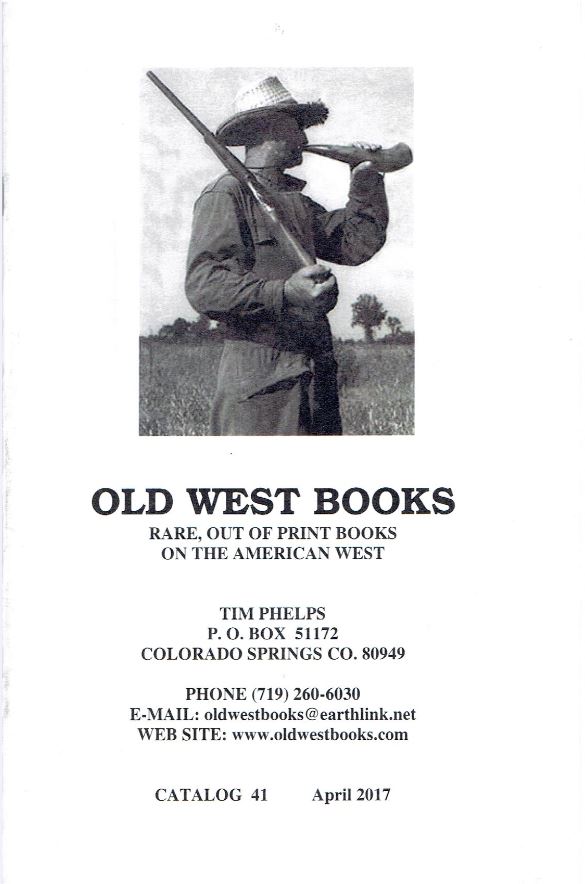 Tales from the Old West.

Old West Books has issued their Catalog 41 of Rare, Out of Print Books on the American West. Old West further describes their specialization as "Books on the American West, Custer, the Fur Trade, Overland Travel, the Cattle Industry, and the Civil War." The last of those may sound odd, as the Civil War mostly took place east of the Mississippi, but skirmishes were occurring as far west as New Mexico and Arizona. The events described took place in the 19th century or early 20th, and most of the books date from those times as well. Here are a few samples of the material available to collectors of the American West.

It's been commonly accepted that there were no survivors from the 7th Cavalry after Custer's Last Stand. Not so. The truth was revealed in Barron Brown's 1935 book, Comanche The Sole Survivor of all the Forces in Custer's Last Stand, the Battle of the Little Big Horn Illustrated... You are probably thinking from his name that the sole survivor was an Indian scout, spared by his fellow Native Americans that terrible day. No, Comanche was not an Indian. He was a horse. He belonged to Captain Myles Keogh, who obviously did not survive. He had been in battle with Keogh and injured before, but was in pretty rough shape this time when found by army troops two days later on the battlefield. They nursed him back to health, retired Comanche from ever having to go to war again, and he became something of a symbol and hero to non-native Americans. He was given the honorary title of "Second Commanding Officer" and would lead parades. Comanche lived until 1890 (age 29). His body was stuffed, like Roy Rogers' "Trigger," and displayed at Chicago's Columbian Exposition in 1893. He was then given to the University of Kansas, which to this day has him on display at their Natural History Museum. They say he is "one of the most visited exhibits in the museum." Old West says he is "the most famous horse in military history." For accuracy, we should note that the Indians were not out killing the Cavalry's horses. Other horses survived and were taken by the Indians, but Comanche's condition was probably such that they just left him there. Item 3. Priced at $200.

Miles Goodyear was the first white man to build a home in Utah. He was there to greet the Mormons when they arrived. He traveled west with the Whitman missionary party in 1836, but split off from them and headed for the mountains to be a trapper. He was there for the famed mountain men "rendezvous" in 1843. By then he had already married the daughter of a Ute chief and had two children. In 1845, he established Fort Buenaventura in what is now Ogden. He planned it to be a base for trappers and a stop for emigrants heading west. Goodyear encouraged the Mormons to settle there when they arrived, but they chose Salt Lake City instead. However, the Mormons purchased Goodyear's fort for $1,950 and he then moved on to California. He continued trading there and found gold, but died in 1849 at age 32. Item 80 is his biography, Miles Goodyear First Citizen of Utah Trapper, Trader, and California Pioneer, by Charles Kelly and Maurice L. Howe, published in 1937. It is copy #312 of 350. $195.

Neither of the previous biographies were written by its subject. Not surprising, as one had died almost a century earlier and the other was a horse. This one is an autobiography, The Life of John Wesley Hardin, From the Original Manuscript, As written By Himself, published in 1896. Actually, Hardin was dead by then too, but was deceased only a year and had left a manuscript behind. Hardin's father was a Methodist minister, hence his first two names being "John Wesley," but he did not follow in his father or his namesake's footprints. John Wesley Hardin had a violent temper and a willingness to kill anyone who got in his way, or perhaps even annoyed him. Reportedly, he once shot a man in an adjoining hotel room for snoring too loud. He killed his first man when he was age 15, and went on to kill perhaps a dozen, or two, or three more. The count is uncertain. He even killed lawmen, though interestingly, he got out of town after one of his killings before Wild Bill Hickok returned, evidently afraid Wild Bill might be more than his match. Eventually, Hardin's luck ran out. He was captured by Texas marshals and sentenced in 1877 to 25 years in prison. He used the time to study law, and in 1894, after serving 17 years, he was pardoned. That turned out not to be such a good thing for him. He went into the practice of law in El Paso, but still managed to find trouble. A year later, he was shot and killed by a sheriff with whom he had quarreled. However, he used his year out to write this manuscript biography which was published after he died. Item 31. $300.

After the Mexican War, Mexico ceded a large amount of territory in the American Southwest to the United States. There was one problem. No one knew where the new border was located. The result is boundary commissions were formed on each side of the border. One of the commissioners for the American side was John Russell Bartlett. He spent three years surveying, and in 1854 published an account, Personal Narrative of Explorations and Incidents in Texas, New Mexico, California, Sonora, and Chihuahua, Connected with the United States and Mexican Boundary Commission, During the Years 1850, '51, '52 and '53. The surveyors started in California, and that portion was relatively easy to plot. However, the border through Arizona and New Mexico was difficult to establish, hence it taking so long to complete the job. Ironically, the following year, all of their work was thrown out. Wishing to build a southern railroad route to the Pacific, and the terrain being problematic, the U. S. "convinced" Mexico to sell them some more land south of the border, the Gadsden Purchase. The result was the surveyed border was no longer the border. Still, this book is very useful for learning about the geography and topography of the area. Here is an unexpected fact about Boundary Commissioner Bartlett – his previous job was as a bookseller in New York, and later on he became the librarian at the John Carter Brown Library. Item 1. $1,500.

Next is a story of a harrowing journey west, and life in a Colorado mining town in the 1860's: A Dangerous Crossing and What Happened On The Other Side Seven Lean Years. It is two accounts, Emma Shepard Hill's story of the journey from Ohio to Empire City Colorado (today just Empire), and the second is a diary she wrote in Colorado. Her "father" (actually an uncle, her parents having died) had been to Colorado the previous year, and in 1864, was bringing supply wagons for a Boston mining company back there with his family. They traveled by train to St. Joe, itself a bit scary as it was during the Civil War and killings were frequent in Missouri between the factions. From there they headed west in a pack train with others. It was a hot, dry year, water was often scarce, forage poor, the trail a fog of dust. However, what made the journey frightening to 13-year-old Emma and everyone else was 1864 was a year of Indian uprisings. Desperately, and unsuccessfully trying to hold on to their land, they attacked numerous wagon trains and settlements along the route. The emigrants saw numerous destroyed wagons, burned out ranches, dead, rotting mules and oxen, and a few human bodies along the way. Travelers and soldiers told them numerous stories of others who had been killed both ahead of and behind them in the last day or two. On the bluffs, they often saw Indians, and occasionally had to pass through ravines where they easily could have been ambushed. Once they were visited by 18 Indians, dressed in Union uniforms, claiming to be army scouts. Emma never knew whether they really were, or were using the uniforms of soldiers they killed to gain their confidence. They accepted some biscuits and moved on, perhaps because the train was too large to attack. Through the long days of travel, and long nights in darkness, they constantly expected the Indian attack that would finish them off. It never happened, and they safely made it to Denver. Item 40 is a 1924 second edition (it was first published in 1914). $850.