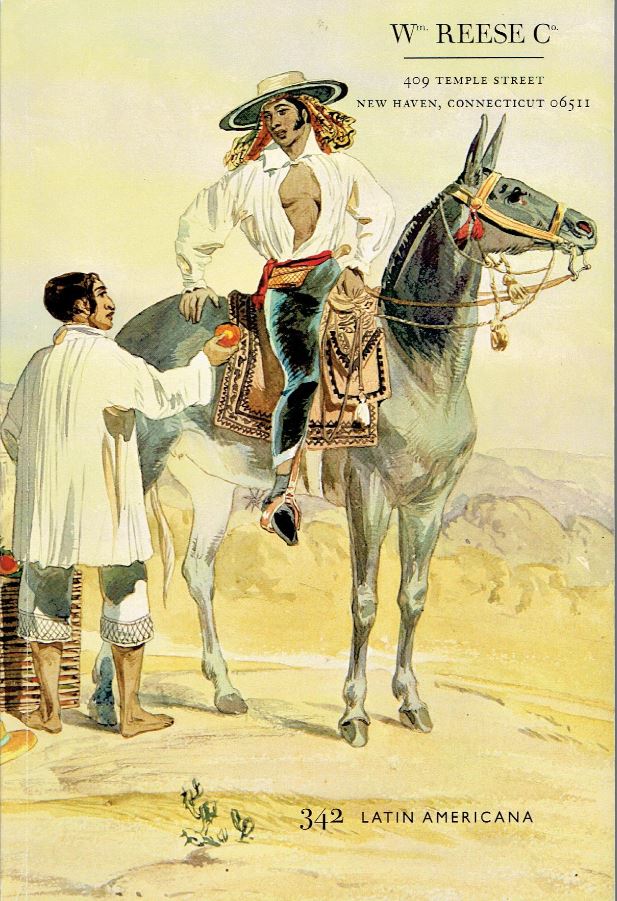 The William Reese Company is known for specializing in Americana, and this is a catalogue of Americana, but not the typical Reese one. Reese's 342nd catalogue takes us south of the border, to the land of Latin Americana. From Mexico to Chile, tropical to chilly, it's all here. History throughout South and Central America follows a common path, millennia as a land of native populations, some with quite advanced civilizations, centuries of Spanish (or Portuguese) rule, followed by revolutions that swept the continent in the early 19th century. Within a few years, practically the entire land was independent. Here are a few items from this catalogue reflecting Latin America's long history.

The conquest of Latin America would begin with Columbus' voyage of 1492. The first extensive description of this new world came in 1535, by a man who was present when Columbus returned, Gonzalo Hernandez de Oviedo y Valdes. Oviedo would take several trips to the New World himself where he served in a number of official posts, and he met with many of the early Spanish explorers. He kept extensive notes of all he saw and heard, which he used to compile this account: La Historia General de las Indias. It describes the natives, natural history of the land, and tells of its conquest. This copy has a few pages in facsimile. Item 107. Priced at $18,500.

Here is another look at the early conquests, specifically of Mexico. The writer was an eyewitness and participant in Cortes' conquest of that land, though this book was many years in the making. Bernal Diaz del Castillo traveled to the new world to make his fortune, and after a few abortive attempts, hooked up with Cortes in 1519. He accompanied the Conquistador as he pushed his way through Aztec country, was there when Cortes met with Montezuma, and when he crushed the empire. Many years later, Diaz wrote up an account of the mission, using his own experiences and consulting with others. The title is The True History of the Conquest of Mexico...Written in the Year 1568. However, his account never got beyond Diaz' manuscript during his lifetime. Diaz died in 1582, and the manuscript languished in a Madrid library until published in 1632. It was finally translated many years later, this being a first English edition, though not published until 1800. Item 58. $1,500.

William Walker was something of a would-be latter day Conquistador. An American, he had dreams of setting up a government under his command somewhere, and since that was not much of a possibility in the United States, he looked south. In 1853, he attempted to invade northern Mexico with a small group of supporters. He was quickly pushed back across the border. Walker may have been defeated, but his ambition was not. In 1856, he invaded Nicaragua. This time he used one of Cortes' methods, hooking up with some of the unhappy locals to overthrow the rulers. He succeeded in capturing Nicaragua. In an attempt to draw in immigrants from the American South, Walker overturned the ban on slavery. However, he managed to upset Nicaragua's neighbors, and certain American business interests. He was overthrown. Once again, Walker would not be deterred. He launched another mission from American shores, but was captured by the U.S. Navy and returned home. While back in the U.S., Walker wrote this book, The War in Nicaragua, published in 1860. Meanwhile, he plotted his next attempt, this time figuring he could best capture Nicaragua through Honduras. Once more, in the year this book was published, he set off for Central America, but was captured by the British. The British turned Walker over to the Hondurans who promptly executed him. Item 159. $600.

Simon Bolivar has been called by some the "George Washington of South America," though it did not turn out as well for that continent's most notable liberator. Bolivar was a leader in the fight for independence and forming the nation of Gran Colombia, a country consisting of much of the northern half of South America. He sought to keep other parts of the continent closely allied as well. However, he dealt with rivals and factions tearing at his government, so on August 27, 1828, he issued this notice, headed: Simon Bolivar Libertador Oresidente de Colombia &c&c&c. Colombianos! It comes with a second announcement. In it, Bolivar pronounced himself dictator for life. Doesn't sound very Washingtonian, but it really wasn't as bad as it sounds. Perhaps Bolivar was being more Lincolnesque as he was desperately trying to hold his large nation together and felt he needed complete control to do so. He intended to relinquish those powers once all the internal strife was ended. It was not to be. The internal battles became worse, and in despair, his reputation attacked by rivals accusing him of wishing to be a dictator, Bolivar resigned just two years later. Both Bolivar and Grand Colombia died a short time thereafter, the latter broken down into several separate nations. Item 13. $17,500.

Item 149 is a Mexican pamphlet from 1846 concerning the last attempt to resolve the American-Mexican boundary dispute over Texas: Ultimas comunicaciones entre el gobierno Mexicano y el enviado estraordinario y ministro plenipotenciario nombrado por el de los Estados-Unidos, sobre la cuestion de Tejas. The United States considered the Rio Grande the Texas-Mexican border, Mexico the Nueces River farther north. Besides which, Mexico never really recognized Texas independence in the first place. Meanwhile, President Polk was a believer in Manifest Destiny, which entitled the U.S. to Mexican territory, in his opinion. Polk sent John Slidell to Mexico to resolve the border issue and also to buy California and New Mexico. Mexico responded that it did not recognize the U.S. flag on Texas soil and would never permit territorial advances by the United States. Polk had his justification/excuse to attack, and when it was all over, he had Texas, New Mexico and California for free. Manifest Destiny achieved. Mexico should have built a wall! $1,500.