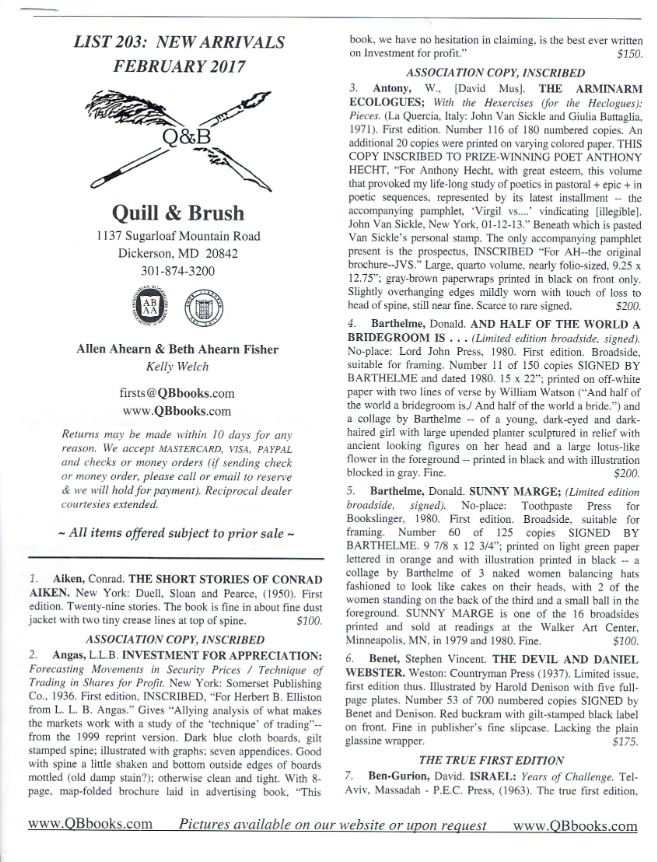 Quill & Brush published their List 203: New Arrivals February 2017 a month or so ago. Offered is a variety of material, old and recent. Very few items will be out of reach of younger collectors, though there are a few classics which require a somewhat larger budget, such as a first edition, first issue of The Great Gatsby. There is a mix of fiction and nonfiction, classic and recent, authors everyone will recognize and those familiar perhaps only to their followers. Here are a few examples from this collection.

We will start with a book listing no publisher or place, a book both inspirational and sad, and quite obscure: That Shining Hour. The explanation for the obscurity is that it was meant only for private distribution among friends and family, and yet the list of contributing writers is filled with major American figures of the 1960's – Ted Kennedy, John Glenn, Martin Luther Ling, Jack Parr, Cesar Chavez, Supreme Court Justices Douglas and White, Robert McNamara, General Maxwell Taylor, Walter Reuther, Arthur Schlesinger, and George Plimpton. The book was printed in 1969 and it is a tribute to the recently assassinated Robert F. Kennedy. The tributes were not necessarily written for the occasion as King was assassinated two months before Kennedy. The book was edited by Patricia Kennedy Lawford, Senator Kennedy's sister, formerly married to actor Peter Lawford. Along with the 120 remembrances, there are photographs throughout the book. It was inscribed by Mrs. Lawford in June 1969, so the book must have been compiled quickly as Kennedy was killed on June 6. The recipients were "Robin and Angie," who were Robin and Angier Biddle Duke. Mr. Duke was an heir to the American Tobacco Company fortune and both served as U. S. ambassadors at various times. Item 61. Priced at $750.

Item 12 is The 2000 Year Old Man in the Year 2000. This is a prospective book as it was published in 1997. The authors were comedians Mel Brooks and Carl Reiner, and many will remember this routine. Brooks played the role of the 2000 year old man, who tells straight man Carl Reiner what life was like when he was young. His answers, naturally, are humorous. This copy has been signed by both. The book contains advice, "Including how not to die and other good tips." You might want to pay attention to their advice. Reiner is now 95 and Brooks will be 90 in June and both are quite alive. $100.

Karel Capek was a Czech writer who wrote about many subjects, though he is perhaps best known for his science fiction. He lived from 1890-1938, and in later years, political matters became more prominent as Europe headed toward self destruction. He was vehemently anti-fascist, which put him at grave risk as it became more apparent that Germany would invade Czechoslovakia. Still, he refused the opportunity to go into exile. Capek died of pneumonia on December 25, 1938, so when the Nazis came for him a few months later, unaware he had already died, they were unable to complete their task. His brother was later arrested and died in a concentration camp. Item 16 is Capek's The First Rescue Party, the first U.S. edition (1940) of a book originally published in 1937. The protagonist is a bright young man with few opportunities beyond working in the mines, and it describes the events when an explosion traps other miners and he is called on to help rescue them at great personal risk. There is a message here of the necessity of people working together to preserve their lives, which was applicable to the situation his country was facing at the time. $250.

John Harvey Kellogg has a last name everyone knows. Still, most people don't know much about him. In the latter part of the 19th century and the early part of the 20th, he was a notable, if eccentric doctor, with many theories about nutrition and good health, from eating a vegan diet to regularly partaking of enemas, with water and/or yogurt, to cleanse the bowels and provide a healthy supply of good bacteria. Dr. Kellogg had particular hang-ups about sex, some of which he explained in this 1877 book, Plain Facts About Sexual Life. As he explains in the introduction, "The prime object of [this book's] preparation has been to call attention to the great prevalence of sexual excesses of all kinds and the heinous crimes resulting from some forms of sexual transgression, and to point out the terrible results which inevitably follow the violation of sexual law." Kellogg had a particular abhorrence for masturbation, which led to such recommendations as strange as advocating mutilation of sexual organs or causing blisters to make the practice painful, undoubtedly an effective deterrent. Other remedies included bandaging the hands, the use of a patented cage device, and electrical shock. Cool enemas help too. Another way of decreasing sexual arousal, he believed, was to eat a bland diet. Therefore, he invented corn flakes. I bet you never knew that about your corn flakes. Worth remembering their purpose before you eat your next bowl. Item 60. $600.

Item 31 is an inscribed first edition (1939) of Christ in Concrete, by Pietro Di Donato. Di Donato was a bricklayer, like his father, who was killed when a building on which he was working collapsed. It happened on Good Friday, hence the title. Di Donato had a limited education, but he loved to read. It led to this book about life in the Italian immigrant community in New Jersey and the people's struggle to survive during hard times. This copy is inscribed, "To dear Gertrude Berg - whom I have enjoyed long before meeting. Salute!" Gertrude Berg also came from an immigrant family, in this case a Jewish one, and became an actress and writer of a long running radio, and later television program, The Goldbergs. She played the matriarch, Molly Goldberg. Despite the differing backgrounds, Di Donato and Berg would have had much in common growing up in immigrant families. $150.

Next up is a book entitled Berg, but it has nothing to do with Gertrude. The book is about "a man called Berg, who had his name changed from Greb." The author is Ann Quin (Niuq?). It is an avant-garde novel about a triangle between a father, his mistress, and his son, who attempts to kill his father. It received mixed reviews, as often happens with writing styles that are out of the ordinary. Ms. Quin suffered from mental issues for which she received electrical shock treatment and killed herself at the age of 37. Item 95. $250.