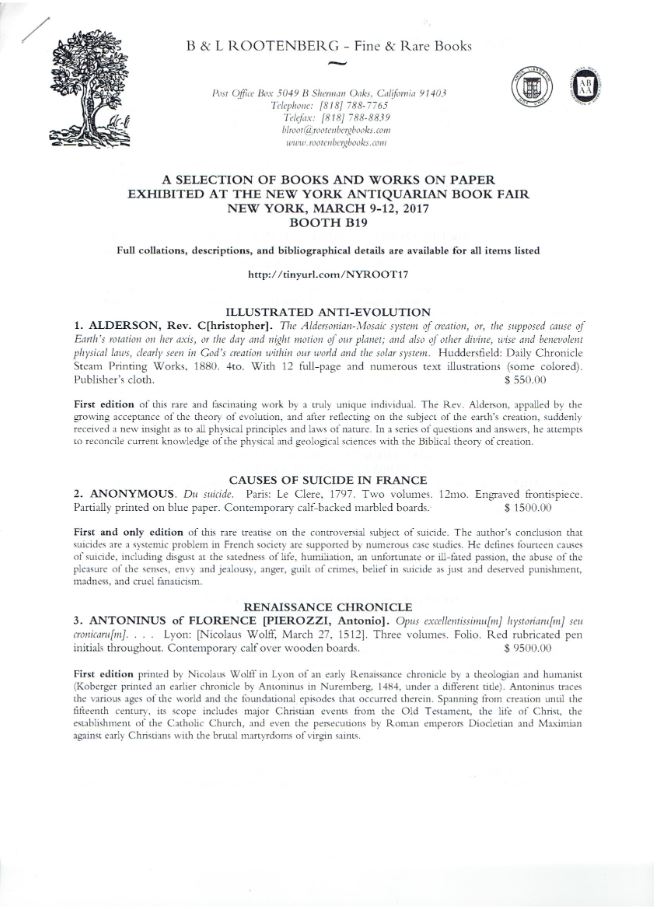 Some remarkable books for the fair.

B & L Rootenberg Fine & Rare Books recently prepared a catalogue of A Selection of Books and Works on Paper Exhibited at the New York Antiquarian Book Fair. There is a some remarkable content in this selection of slightly over 100 items. Anything may show up in this group, but we do note they are mostly a few centuries old, and there is much in the way of science or pseudoscience. Still, there are important items that don't fit that description, such as a first edition of Walt Whitman's Leaves of Grass. You need to look for yourself, but here are a few samples.

We start with a how-to guide, though I'm not sure whether this is an item from science, medicine, or theology. Item 18 is Manuale Exorcistarum by Candido Brognolo. This 1651 guide is a manual for conducting an exorcism. It was written for clergymen so they could properly perform the procedure. Rootenberg explains, "the Author, who specialized in the process of identification and diagnosis of possessions of preternatural origin, analyzes the unmistakable signs of the possession, providing detailed descriptions of the symptoms of the presence of evil, detailed formulae for the recognition of the state of demoniacal possession, for the discovery of the demon's name, for the cause of the possession, and most importantly the step-by-step directions for the expulsion of the demons." Brognono also provides guidelines for what not to do, such as beating the possessed in a cruel and ferocious manner. This sounds like a very useful book. Priced at $4,500.

Here is a man who church authorities must have believed needed a good exorcising of his demons - Galileo. Galileo was permitted to write a book comparing the Copernican theory of a heliocentric solar system to the traditional, church accepted earth centered model, so long as he didn't advocate for Copernicus' theory. Galileo wrote such a book, his famous Dialogo, a dialogue between persons representing the competing viewpoints. However, it took little imagination to recognize that Galileo was advocating Copernicus' position. Church authorities saw right through it and the great astronomer was put on trial. He was convicted, and while spared the typical brutal punishments of the day, he was in effect placed on house arrest for the rest of his life, and denied the right to speak his views. Item 41 is a first edition, first issue of Galileo's Dialogo, published in 1632. $40,000.

While biblical authority was the common explanation for why Galileo was wrong, some attempted to marshal scientific evidence against his theory as well. One such man was Jacques Grandami, a physicist and astronomer friendly with many scientists of his day, but also a Jesuit father. Item 45 is his book, Nova demonstratio immobilitatis terrae petita ex virtuta magnetica, published in 1645. Clearly, Grandami had already reached his conclusions and looked for scientific evidence to back those preconceived notions, rather than to reach an objective conclusion. Nonetheless, it was at least an effort. Grandami was familiar with magnetism and conducted experiments with magnetic spheres in water which led him to believe that magnetic spheres do not rotate. He was well aware that the earth was a giant magnetic sphere, so therefore, he concluded, the earth cannot spin on its axis and create an illusion that the sun is revolving around the earth. The sun must actually be doing that. $12,000.

Years after Grandami's refutation, actually more than two centuries later, Rev. Christopher Alderson had some more creative explanations for the motion of the sun and many other matters of scientific importance. Upset by such things as acceptance of the theory of evolution, Rev. Alderson was ruminating on these issues when suddenly it came to him. Actually, the answers were sort of delivered to him. They came from Moses. Alderson described them in The Aldersonian-Mosaic system of creation, or, the supposed cause of Earth’s rotation on her axis, or the day and night motion of our planet; and also of other divine, wise and benevolent physical laws, clearly seen in God’s creation within our world and the solar system, published in 1880. Alderson explained that he called it the Alderson-Mosiac system rather than just the Mosaic system as he didn't want Moses to be blamed for any errors of calculation he made. I'm sure Moses would have appreciated the concern. Alderson explains all the major issues of science of the day, including that the earth is enclosed in a glass sphere, the moon is inhabited, the sun is not a separate body but electricity reacting with the earth's atmosphere, and light does not travel at nearly so high a speed as has been calculated. Who knew that Moses was crazy? Item 1. $550.

Item 66 includes nine issues of the French scientific journal Comptes rendus hebdonadaires des sciences de l'academie des sciences, from 1846. One of them contains a major astronomical discovery – Recherches sur les mouvements d'Uranis, by Urbain Le Verrier. What Le Verrier concluded by calculating the movements of Uranus was that there must be another planet out there. He concluded this strictly from applying mathematical formulas to those movements. Newton's law of gravity explained how Uranus should move, but astronomers found slight variations. Using his formulas, Le Verrier calculated Uranus must be experiencing the pull of an otherwise unknown and unseen planet to experience these variations. He further calculated where that planet must be, and then sent a notice to a Berlin observatory telling them where to look. Voila! They discovered Neptune. $6,500.