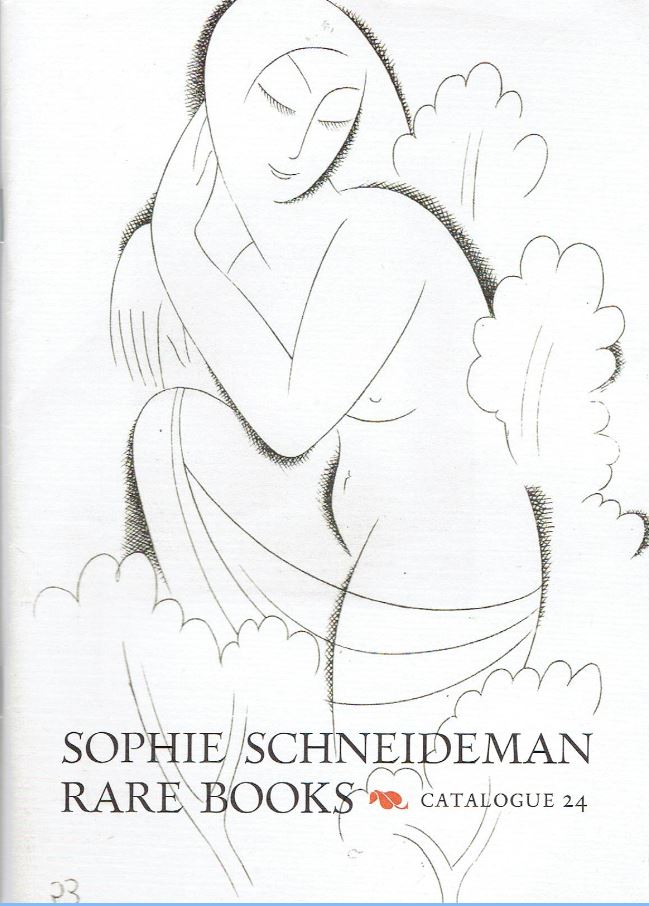 Works from the book arts.

Sophie Schneideman Rare Books has issued Catalogue 24, Illustrated & Private Press Books, Artists' Books, Bookbindings, Prints & Original Artwork. It is always helpful when the title, like those extremely long titles of books long ago, summarizes everything within quite thoroughly. This is a catalogue of the book arts, fleshed out more clearly in that title. Here, now, are a few specific samples.

Thomas James Cobden-Sanderson was a friend of legendary private press publisher William Morris long before either were in the printing business. Both were founders of the Arts and Crafts movement which sought to restore the quality of printing as it had been in the days before mass production. Cobden-Sanderson may have been the one to give it that name. Morris encouraged his friend to become a bookbinder, advice which Cobden-Sanderson followed. Morris founded his legendary Kelmscott Press in 1891, but five years later he died and Kelmscott closed shortly thereafter. Cobden-Sanderson chose to keep his friend's tradition of fine press work alive by founding the Doves Press. Here is the third work from Doves, and it's a tribute to Morris and his other great love – socialist politics. It is a 1901 printing of William Morris, An Address, by J. W. Mackail. Mackail's address was given to the Hammersmith Socialist Society in 1900, four years after Morris died. This was the first Doves book to be printed in their signature red and black. Item 69. Priced at £580 (British pounds, or approximately $726 U.S. dollars).

After the founding of Doves Press, T. J. Cobden-Sanderson no longer had time to bind books as he had before, but his Doves Bindery continued to operate. He would still design bindings and oversee the work of others. Item 73 is an example of a later Doves binding on a book written by Cobden-Sanderson and published in 1905 by the Hammersmith Publishing Society, The Arts and Crafts Movement. This copy contains an inscription from Cobden-Sanderson "to my dear Gossip with much affection and in memory of the year about to close, 1910." "Gossip" was Lady Antonia Speyer, the Cobden-Sandersons and Speyers being close friends. In 1910, their daughter married the Speyers' son, which explains the particular memorial to that year. £1,900 (US $2,379).

Item 5 is a complete run of The Fleuron, A Journal of Typography. The journal was published in seven volumes from 1923-1930, by Oliver Simon and Stanley Morrison. Its reputation is as one of the most important typography publications of the twentieth century. It was published on handmade paper, and contained numerous illustrations, type specimens, and tipped-in paper samples. Contributors included many of the best known names in the field at the time. Issues were printed in limited numbers, ranging from 110 for volume 1 to 210 for volume 7. £1,500 (US $1,878).

Schneideman begins the description of this next piece with, "Oh the irony!" Indeed. Item 104 is The Quest for Unity; Speeches and Writings. It was printed by the Italian private press Officina Bodoni in 1975. It was published to celebrate Britain's entry into the European Free Trade Association, after an overwhelming "Yes" vote in a referendum. My how things have changed. It is a collection of declarations made by political leaders over the preceding years about European unity. It includes the words of such people as Churchill, Marshall, Kennedy, De Gaulle and Brandt. In those days, unity was seen as critical to avoiding the wars that had plagued Europe for centuries, reaching its apex of horror with the Second World War, along with providing a defense against the totalitarianism of the Russian regime to the east. What is that quote about those who forget the past being doomed to repeat it? £100 (US $125).

Item 56 is a rather strange, Mona. Obiit... published by the Ashendene Press in 1929. This rare ephemeral item consists of three verses on a single sheet. The author was F. E. Smith, First Earl of Birkenhead. Smith was a noted politician at the time, having been Lord Chancellor among other positions. He was said to be a brilliant man and speaker, one with little concern whether his oratorical skills were used to insult others along the way. It meant he was not always the most popular man around. He also developed a reputation for pomposity, and his drinking was so extreme that it ended up killing him. Despite all the notoriety in his day, he might be completely forgotten now but for his association with a contemporary who is well-remembered, Winston Churchill. He was for years Churchill's best friend, his brashness and decisiveness undoubtedly appealing to Churchill, who possessed similar traits. This obituary was written for Mona Dunn, friend of the Earl's daughter and the Earl's mistress. She was 30 years younger than Smith and just 25 when she died. The Earl had a wife at home, but apparently all was good. He was devastated by her death, leading to this tribute. Smith died just two years later, his drinking leading to a breakdown of his body. £450 (US $563).