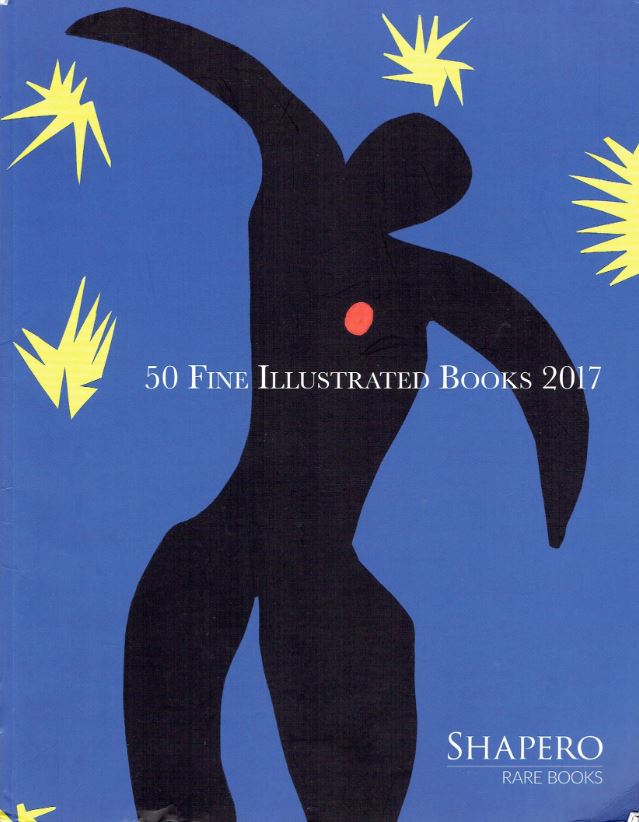 Shapero Rare Books has created an extraordinary catalogue of 50 Fine Illustrated Books 2017. Shapero is noted for having the best of material and catalogue presentations that match the books. Here we have 150 pages to describe and illustrate the 50 beautiful books offered. Most have multiple color illustrations along with the textual descriptions. Here are a few samples of these fine illustrated books.

There are a few subjects that regularly appear in the most beautiful of illustrated books, because they lend themselves to beauty. Flowers and birds are at the top of the list for obvious reasons. Among the illustrators of birds, Audubon and Gould are the best known names, but here is one that goes back centuries before either was born. We will not pretend that Pierre Belon's artwork is on the level of that of the other two artists, but his work was more scientifically oriented. Belon was a man of many talents, a student of zoology, botany, medicine, natural history and ancient history. From 1546-1549, he embarked on a journey around the Mediterranean and parts of the Middle East. He wrote about what he saw on his journey, and a couple of books about fish, before producing this, his most notable book, L'Histoire de la Nature des Oyseaux (natural history of birds), published in 1555. The book both illustrates and provides scientific descriptions of the varieties of birds he discovered on his journey. The most notable illustration is one in which he shows a bird's skeleton next to that of a human. The Dictionary of Scientific Biography credits Belon as being "the originator of comparative anatomy" for this accomplishment. The similarities must have been stunning to people in this time three centuries before Darwin. Item 6. Priced at £37,500 (British pounds, or approximately $46,760 U.S. dollars).

Speaking of Gould and Darwin, by the time Darwin returned from his journey to South America, the lessons from which would lead to his theory of evolution two decades later, Gould was already a well-known ornithologist. Darwin consulted him in identifying and classifying the new bird species he had discovered on his trip. Darwin's return coincided with publication of the final volume of Gould's The Birds of Europe (1832-1837), whose publication coincided with Audubon's book on the birds of America. Unlike Audubon, Gould relied on the assistance of others to do many of his drawings. In this case, the book uses many plates by Edward Lear, a spectacularly talented artist who specialized in birds. Lear also helped Gould's wife, Elizabeth, who also provided artwork for her husband's books, improve her techniques. Deteriorating eyesight led Lear from art, particularly the fine detailed sort needed for his bird illustrations, to music, and then writing nonsense poems, including the still familiar The Owl and the Pussycat. Item 23 is a first edition of Gould's The Birds of Europe. £115,000 (US $143,492).

Pierre-Joseph Redouté is generally acknowledged as the greatest artist when it came to painting roses. His likenesses are both uncannily accurate and beautiful – beautiful as... a rose. Along with being a great artist, Redouté was a remarkable survivor. He was an official artist for Queen Marie Antoinette, and any association with her was practically a death sentence after the Revolution turned to terror and the Queen, and so many others, had their heads chopped off. Somehow, Redouté survived, and when Napoleon became emperor after the Revolution fell apart, he became an official artist to Empress Josephine. His artwork was that good! With the end of the Napoleonic era, Redouté no longer held quite such status, though his serving Josephine did not hurt him any more than his service to Marie Antoinette. He just had to scrounge a bit harder for financially rewarding projects. Item 41 is Choix des plus belles fleurs et de quelques branches des plus beaux fruits (the most beautiful flowers and some branches of beautiful fruits), an 1835 re-impression of a work originally published 1827-1833. This is a book of beautiful drawings of flowers, bouquets, and fruits on their branches. It is one of the examples which led to Redouté's reputation as "the Raphael of flowers." £45,000 (US $56,162).

It was a spectacular celebration, matched by this illustrated tribute to the event. Item 3 is Description du Sacre et du Couronnement de leurs Majestés Impériales l’Empereur Alexandre II et l’Impératrice Marie Alexandrovna, published in 1856. It is a celebration of the coronation of Emperor Alexander II of Russia and Empress Marie Alexandrovna. This is an enormous book, an elephant folio featuring 52 illustrations. The cost to make it was similarly large. It was produced in two issues of 200 copies each – one in Russian, the other in French. The French issue, such as this one, was created for high court officers and the diplomatic corps. Alexander II ruled until 1881, when he was assassinated. He was a reform-minded ruler, with a Lincolnesque emancipation of the serfs and other reforms, not followed by his son and grandson. They would have been well advised to show more concern for their people. £85,000 (US $106,113).

In 1941, the great twentieth century artist Henri Matisse underwent surgery for abdominal cancer. He was 71 years old, and while he survived the disease, movement became more difficult for him. Painting and sculpture were now a challenge, so, ever the artist, he turned to a different medium, a form of collage. He would have his assistants paint paper in bright colors, which he would then cut into various shapes. He called it "drawing with scissors." The result was something between his painting and sculpture, art with a somewhat three dimensional appearance. In 1947, he published a collection of 20 of these brightly colored pieces in a quantity of 270 copies. Matisse's handwritten text is printed in facsimile, making this the only book of which Matisse was both author and illustrator. He chose Jazz as its title as this music form reflected the creativity of the work. That is one of these illustrations which graces the cover of this catalogue. Item 31. £400,000 (US $499,300).