A Spring Sale Catalogue from Erasmushaus 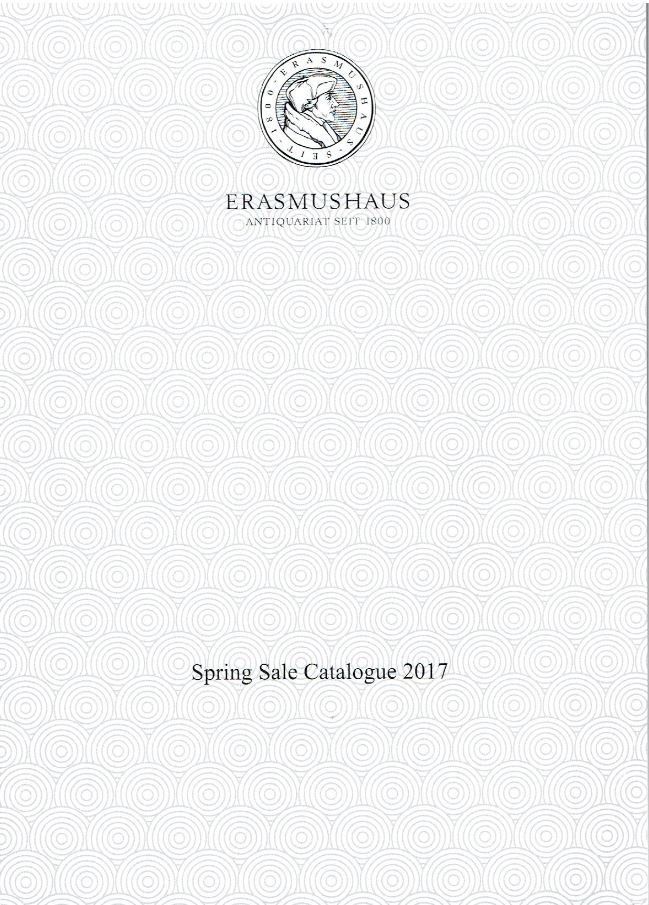 Erasmushaus has issued a Spring Sale Catalogue 2017. The subtitle is Literature. We might add that this is very old literature. You will struggle to find anything whose date begins with a number larger than 18, and most are smaller, in the 15-17 range. Not even your great-great-grandparents saw any of these books when they were new. There is a warning in this book – "Sale ends 15th of April." Act quickly. Items are priced at either 30% or 50% off. We will list the regular prices, but everything is at least 30% off. The actual catalogue, physical or electronic, will state the discount on each item. Act now before the sale ends!

Here is another word of caution. What we have said so far is direct quotes, untranslated. However, this is where the English ends. Descriptions are in German. The books themselves are in continental European languages, mostly German and French. This is appropriate for a Swiss bookseller, in a land squeezed between Germany and France. Appropriately, there are also a few items from the other side of the southern border – Italy. And, there is one book in English. Here are a few samples.

We start with Lettres sur l’Atlantide de Platon et sur l’ancienne histoire de l’Asie (letters on Plato's Atlantis and the ancient history of Asia). This 1779 book by Jean-Sylvain Bailly was addressed in particular to his friend Voltaire, though by the time of publication, the latter had died. Bailly came from an artistic family, but his interest was science. He became an astronomer, writing books about the moons of Jupiter and other topics. He was a member of various societies and at one time hosted fellow scientist Benjamin Franklin. Bailly became interested in the history of science, and this is where he went a little astray. He believed Plato's claim that Atlantis was a real place. While most believers placed the lost continent in the Atlantic Ocean, Bailly believed it was in the Arctic. His theory, of which he tried to convince Voltaire, was that earlier in Earth's existence, the Arctic was heated by internal fires in the earth. As those cooled down, Atlantis went from paradise to uninhabitable. Bailly believed the original inhabitants of Atlantis migrated south to Asia. As a footnote to Bailly's career, he became part of the democracy movement and French Revolution. He was in the National Assembly, and from 1789-1791 served as Mayor of Paris. However, his popularity waned as people saw him as being too authoritarian and not democratic enough. He resigned in 1791, but as the Revolution spun out of control and into the Reign of Terror, Bailly, like so many others, was caught in the vortex. In 1793, he was arrested, tried, and the next day guillotined. Item 15. Priced at CHF 1,200 (Swiss francs, or approximately $1,207 U.S. dollars).

Here is some more fictional science, though this one is intentionally so. I guess you could call it science fiction. Item 189 is Le philosophe sans pretention, ou, L'homme rare (Philosophy without pretension, or the rare man). The author of this 1775 title was Louis Guillaume de la Folie. La Folie was an industrial chemist, who made a lot of money devising better ways to dye thread. However, his curiosity and knowledge went beyond such common considerations. In his book, Ormisais, a astronaut from the planet Mercury, is forced into a crash landing on earth. He has to search the earth for the materials to repair his spacecraft. La Folie describes some technological advances, assuming such is an accurate way of describing fictional things. His spacecraft runs on electricity, being neither a winged vehicle nor balloon. It looks more like a chariot. La Folie also displays a knowledge of current scientific knowledge, so, for example, his alien from Mercury mentions that in space there is no up or down. CHF 11,800 (US $11,868).

Let's go with one more piece of science fiction. This one is Le voyage de l'Isabella au center de la terre, a voyage to the center of the earth, by Leon Creux, published in 1922. Gare, the protagonist, rides a cylindrical ship that is able to bore its way down to the center of the earth. What he finds is not what you would expect. There is an entirely new cosmos down there, with its own stars, constellations, and a planet called anti-earth. Creux was the inventor of a scroll compressor, which compresses air using a screw type device to press the air tighter. It turns sort of like a cylindrical ship drilling its way into the earth. The book features some fantastic illustrations by French artist Paul Coze. CHF 500 (US $503).

This next item comes from the category of historical fiction: A Filha do Regicida. Romance historico, by Camilo Castel Branco, published in 1875. The setting is 1640 Portugal, the planned assassination of a king, with a mix of fictional and real, or at least based on real characters. The prolific writer Branco may have been more interesting than his stories. He was born illegitimately into a family with a tendency toward mental illness. He was orphaned young, raised by relatives in a primitive region. Nevertheless, he studied medicine and later for the priesthood, but ended up being a writer. Branco engaged in numerous affairs before eloping with a married woman. He was imprisoned for adultery, which time he used to whip off a couple of novels, one about doomed love. He would marry the woman after her husband died, but eventually his health failing, and despondent over his son's insanity, killed himself. Along the way, Branco wrote 58 books, some said to be quite good, others filling publishers' orders for romantic novels to sell to readers of limited taste. I don't know where in that spectrum this particular work fits. Item 58. CHF 1,200 (US $1,207).