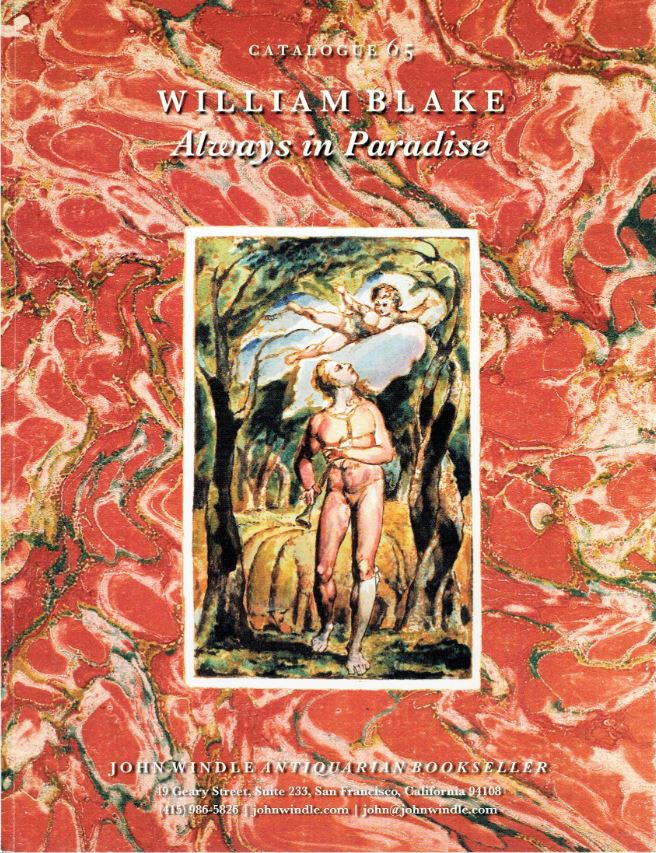 John Windle Antiquarian Bookseller has published an outstanding and extensive catalogue of William Blake Always in Paradise. A Catalogue of Artwork and Books by and about Blake and his Circle. The "Always in Paradise" reflects one of his early books, Gates of Paradise, but even more so a quote from Catherine Blake which begins this catalogue: "I have very little of Mr. Blake's company; he is always in Paradise."

William Blake was a late 18th century, early 19th century poet, engraver, and artist. He was talented at the first two, but it is his original artwork that stands out most of all. I wouldn't have any idea how to describe it, but his art is captivating. Sadly, Blake was not particularly appreciated during his lifetime, but his a reputation has grown steadily since he died almost two centuries ago.

John Windle will offer you books in a variety of fields, but his greatest specialty is William Blake. Last year, Windle opened a William Blake gallery adjacent to his shop in San Francisco. It is likely the first gallery devoted to Blake in two hundred years, when Blake was around to oversee it himself. This catalogue contains hundreds of items related to Blake. It includes Blake artwork, books, illustrations and engravings, then moves on to later facsimile editions of his works, art reproductions, catalogues, bibliographies, biographies, Blake's Circle, works inspired by Blake, books about Blake, and the Trianon Press and William Blake Trust. Naturally, most items from Blake's lifetime are not inexpensive, though, as Windle notes, "modestly priced compared to other artists of his stature." However, there is much in here, and later editions and reproductions are available "at prices that a college student might afford." This is essential as the next generation of collectors will need to whet their appetite on a college student's budget if they are to have an appetite at all. Here are a few selections from this extensive Blake collection.

In 1799, Blake was commissioned to create 50 tempera paintings based on the Bible. Tempera used watercolors with glue to create a dense, oil-like paint but with a different effect. Thirty of those have survived, only seven still in private hands. This is the best preserved example of those seven, The Virgin Hushing Young John the Baptist. In the picture, young John, a butterfly in his hand, appears eager to show his prize, while Mary hushes him from waking the sleeping infant Jesus. This painting is priceless, figuratively and literally (no price is given). I think it qualifies for "if you have to ask..."

The Gates of Paradise was Blake's first attempt to use images to convey a message. First published in 1793 as For Children, it was later described as For the Sexes. The work is very rare. Windle notes that the first state is known in only one copy, the second in four, the third in one, the fourth in two, and the fifth in eleven. At least five of those 11 are believed to have been printed posthumously, likely by his widow. These plates come from one of those 11 copies of the fifth state printed during his lifetime, circa 1825. They came from an incomplete copy. The Gates of Paradise traces the stages of life of man. It goes from birth through death, including passage through the four elements – water, air, fire, and earth. Offered are six plates, Water, Earth, Air, Hatching ripe, Aged ignorance, and Does thy God. Priced at $40,000 each.

Robert Blair is a not well-known Scottish poet who died 11 years before Blake was born. However, Blake was asked to illustrate a new edition of what is essentially Blair's only poem in 1808. The result is that Blair's The Grave is well-known today, though primarily for Blake's illustrations. The Grave was in the headlines in 2016 when Blake's original artwork was discovered, and to the consternation of many, the drawings were divided up and sold separately. Eleven were sold for a total of $7.1 million, the highest priced plate going for $1,584,000. Fortunately, you can own these dreamlike pictures for a far more affordable sum. Windle offers the folio edition of the book for $8,950, the quarto for $5,750. Alternatively, 14 individual plates from the first quarto edition are offered at prices ranging from $275-$875. One is the frontispiece portrait of Blake.

Blake was called on to create and engrave illustrations for the 1791 second edition of Mary Wollstonecraft's Original Stories from Real Life. Wollstonecraft is remembered today as an early feminist (along with being the mother of Mary Shelley, author of Frankenstein). The book was a collection of morally instructive tales for girls, but the overriding moral of many of Wollstonecraft's very feminist (for its day) books was that women should be educated, that they would be better citizens and wives if allowed to use their brains. Offered is not the book itself, but the six Blake plates. They depict the two girls, their teacher, and sometimes others, at the center of Wollstonecraft's stories in various situations. $3,000.

While Blake was fairly obscure in his lifetime and during the 19th century, his works experienced a great revival in the 20th. What was much ignored in earlier times was discovered and finally given the recognition it deserved in the century after Blake died. No one better recognized Blake's genius than Sir Geoffrey Keynes, surgeon, author, and brother of noted economist John Maynard Keynes. Geoffrey Keynes formed the William Blake Trust, and after seeing some facsimiles of Cezanne paintings produced by Arnold Fawcus, partnered with Fawcus to create the Trianon Press. Trianon would go on to produce many spectacular facsimiles of Blake's works, making them accessible to the public. Among those who became involved in the project were noted collectors Lessing Rosenwald, Paul Mellon, and many others. Offered is a collection of the minutes of the William Blake Trust, from its founding in 1948 through 1969. Most of the collection came from Fawcus' wife, Julie. Reports are signed by Keynes with numerous annotations by Fawcus. Papers include financial and legal arrangements for the trust's founding and accounts of its first 20 years of operation. The quality of Trianon's work is such that its facsimiles are barely distinguishable from Blake's original art. $6,500.

Now for the some Blake illustrations suitable for the college student's budget, and a great starting point for a potential collector. This is a portfolio of 22 facsimile plates of Blake's illustrations for the Book of Job. They come in a purple paper cover and were produced by the Trianon Press. They were sold only at museums and Blake Trust exhibitions. $100.