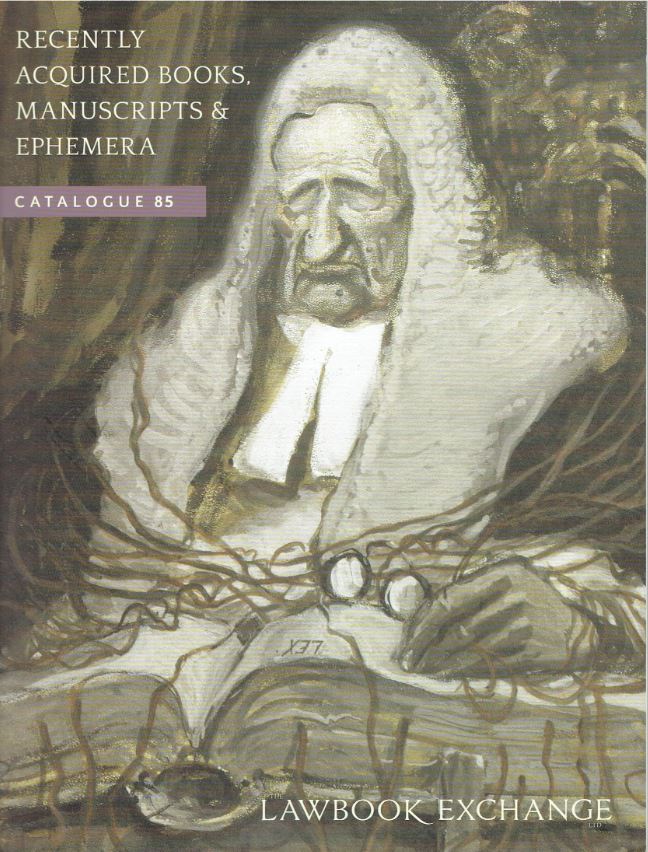 "Justice Precedent" on the cover of the latest Lawbook Exchange catalogue.

The Lawbook Exchange has released a catalogue of Recently Acquired Books, Manuscripts & Ephemera. This is their Catalogue 85 of books, broadsides, manuscripts and ephemeral items in or related to the field of law. The Lawbook Exchange catalogues offer a mix of legal material. Some items pertain to the history and development of the law, of interest primarily to those intimately engaged in the practice of law. Others deal with the interaction of law with society, which can range from legal squabbles with other individuals to public hangings, the ultimate conclusion to an unsuccessful defense. Of course, then as now, we as laymen are most interested in these criminal cases and what happens when people go very wrong. Here are few items from this catalogue, mostly of the sort understandable to laymen.

Here is the story of a man who was legally "wronged," but who nonetheless elicited little sympathy from the jury. Theophilus Cibber was the child of a successful theater family, Susannah Arne a talented young singer who had already caught the ear of Frederick Handel, when they married. Mrs. Cibber moved forward in her career, but Mr. Cibber proved to be a real boor. He was a spendthrift who would sell his wife's clothes and possessions to pay his expenses. He decided to take in a border, William Sloper, to help pay the bills. What his rent didn't pay Cibber borrowed from Sloper. It still wasn't enough, so Cibber pushed his wife into having an affair with Sloper. When she did, Cibber sued their tenant. The account of that trial is told in The Tryal of a Cause for Criminal Conversation, Between Theophilus Cibber, Gent. Plaintiff, And William Sloper, Esq; Defendant, published in 1739. It was an indisputable fact that Sloper had committed the crime, despite Mr. Cibber's despicable behavior, so the jury found in his favor. However, instead of giving Cibber the £5,000 judgment he requested, they gave him £10. Now, here's the rest of the story. It turned out Susannah Cibber much preferred the financially responsible Mr. Sloper to her deadbeat husband and the two ran off. Cibber sued a second time, and this time won £500 of a requested £10,000. However, Cibber's reputation was dirt and he later died in a shipwreck. Susannah went on to have a respected career as a singer. Item 101. Priced at $950.

The United States government can be even slower at paying its debts than Mr. Cibber, much slower. Item 14 is A Sketch of the Claims of Sundry American Citizens on the Government of the United States, For Indemnity for Depredations Committed on Their Property by the French Prior to the 30th September, 1800, Which Were Acknowledged by France, And Voluntarily Surrendered to Her by the United States, For a Valuable National Consideration, In the Convention of That Date, by James H. Causten. During the Quasi-war of the late 18th century with France, when French privateers attacked American shipping for America being too friendly with rival Britain, private American citizens generated claims against France. As a result of a treaty ending that "war," and again as part of the Louisiana Purchase, the United States agreed to pay those claims on behalf of France. America was slow to pay. The claims dragged on and on. Causten first published his attack on the U. S. government in 1829, but this is not a first edition. Offered is a third edition from 1873, republished because the claims were still dragging on as of that day. Indeed, the last claim wasn't finally settled until 1915. $350.

That charming gentleman on the cover of this catalogue represents another case of slow justice, though hardly as slow as with the French claims. This comes from the Becker-Rosenthal murder trial. Charles Becker ran a protection racket against illegal casinos, and he hired gangsters to kill a casino owner who threatened to expose him. This case was a cause celebre in its day because Becker and his associates were also police officers. Becker would become the first police officer sent to the electric chair. However, his conviction did not come until 1915. This image by Boardman Robinson was created for an article in the New York Tribune in 1914. At that time, the result of procedural delays, the trial was already two years old. The image is captioned, Mr. Justice Precedent wearing his famous wig composed entirely of split hairs and adorned with the ceremonial crimson tape. The article with which it appeared was headlined, Leaden Footed Justice in New York State. The gouache image is framed and inscribed by Robinson. Item 78. $4,500.

We had one example earlier of a miserable husband, so here is one of a miserable wife. Catherine Hall Hayes married John Hayes, a carpenter, when she was 16. She already had a bit of a reputation, and, bored with country life and her husband, she took to having affairs. She convinced him they should move to London, where Mr. Hayes became a successful merchant. However, Mrs. Hayes considered him too cheap and boring. He beat her in return. It was an awful marriage. In 1725, Mrs. Hayes convinced her husband to take in a couple of borders to raise more money. He agreed. She took up with both. She convinced her two lovers to kill her husband, and they complied, hacking him to death. They but his body parts in a trunk they dumped in a pond, and threw his head in the Thames. Unfortunately for all three, instead of floating away, it washed up on shore. It was placed on a stake and displayed in a churchyard. This was not like the placing of heads on London Bridge as a warning to others, but an attempt to have it identified. It was, authorities notified, and the three arrested. All were convicted, one border dying in prison before his execution date, the other hanged, and Catherine was burned alive at the stake. She was supposed to be strangled first, but the fire was started too soon and the executioner burned his hands before he could complete his job, leaving Mrs. Hayes to suffer an even worse fate than planned. Item 40 consists of two accounts from 1726, A Narrative of the Barbarous and Unheard of Murder of Mr. John Hayes, by Catherine His Wife... (first edition) and The Life of Catherine Hayes (third edition), bound together. $2,800.

Item 43 is an important study of The Common Law by Oliver Wendell Holmes, Jr. The view then was generally that the law was some sort of abstract principle and one had to discover what that immutable principle was to apply it. Holmes saw it as something functional, based on its applications to various cases. The law was a living, evolving thing, not a mathematical equation to Holmes. This book was published in 1881, the year before Holmes' first judicial appointment, in Massachusetts. Holmes would be elevated to the U. S. Supreme Court in 1902. $1,250.