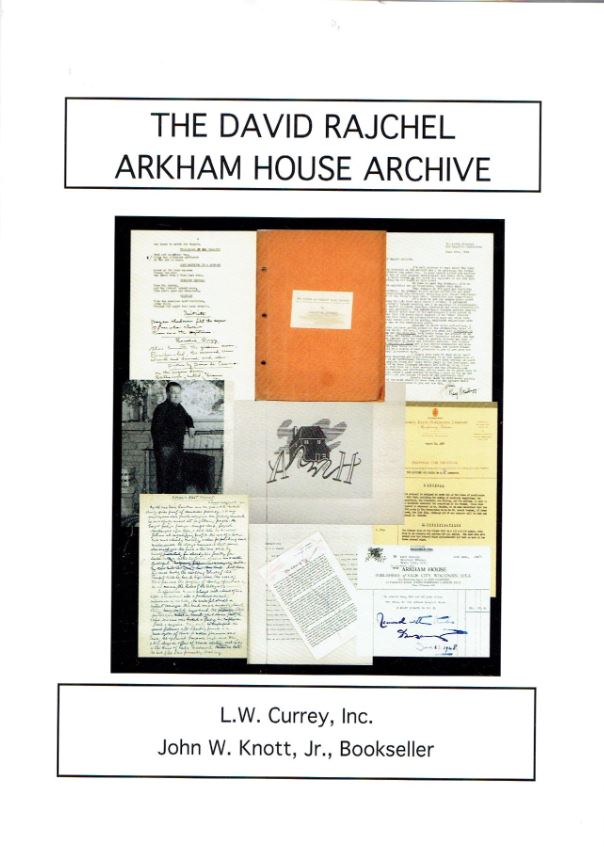 L. W. Currey, Inc., and John W. Knott, Jr., Bookseller are offering The David Rajchel Arkham House Archive. Arkham House will not be familiar to everyone, but those who are aficionados of the genre variously called weird fiction, fantasy, horror, even science fiction, and undoubtedly other names as well, probably know it. Those who are serious fans of H. P. Lovecraft in particular will surely know the imprint. It was the major publisher of his works after Lovecraft died almost unknown in 1937. His works had been confined to pulp magazines at the time.

Two of Howard Phillips Lovecraft's friends and admirers of his work were Midwest writers August Derleth and Donald Wandrei. They determined to keep Lovecraft's memory alive by forming a publishing house devoted to printing his works. It proved to be a good decision as Lovecraft's reputation has grown substantially in the years since his death, to the point that few writing within the genre would not cite him as a major influence. In 1939, the two men formed and published the first Lovecraft book from Arkham House, named after a fictional town in Massachusetts and the asylum therein, in several of Lovecraft's stories. The publishing house was not located in some major metropolitan city but in Sauk City, Wisconsin, a town with but a few thousand residents even today.

In 1941, Arkham branched out to publish a work by someone other than Lovecraft, Derleth himself. Derleth went on to write dozens of books, though he is best known for almost single-handedly keeping Lovecraft and the entire genre he inhabited alive. We may never have heard of Lovecraft but for his efforts. Derleth took over almost all responsibility for Arkham House after the Second World War.

Arkham House would go on to give many writers in the weird/science fiction field their starts. Ray Bradbury's first book was published by Arkham House. The same is true of Robert Bloch, known as the author of Psycho. Robert E. Howard, of Conan the Barbarian fame, had one of his earliest works published by Arkham. The same is true for the American debut of horror writer Ramsey Campbell. Meanwhile, Arkham continued to publish the stories and letters of H. P. Lovecraft.

While a huge success with its readers, Arkham House was never much of a financial success. Derleth at times had to cover its losses with income from his own writings. When he died in 1971, he never expected the publisher to survive. However his children, primarily his daughter, kept the house alive until her death in 2011. It has since passed on to her children, but no new titles have been issued since.

There are two collections of Arkham House archives from the years under August Derleth's management. One is housed at the Wisconsin Historical Society, and this is the other, the David Rajchel Arkham House Archive. This archive contains over 4,000 letters and documents, including a printing proposal for the first Arkham book in 1939. Most of the Historical Society material is from the later years of Derleth's career at Arkham. The Rajchel Archive contains much correspondence from numerous authors with whom Derleth worked, as are many manuscripts, mostly typewritten, submitted to Arkham. There is much in the way of business correspondence between Derleth and his agents, and material pertaining to imprints other than Arkham house with which Derleth was involved. A detailed description of the material in the archive is available from the booksellers.