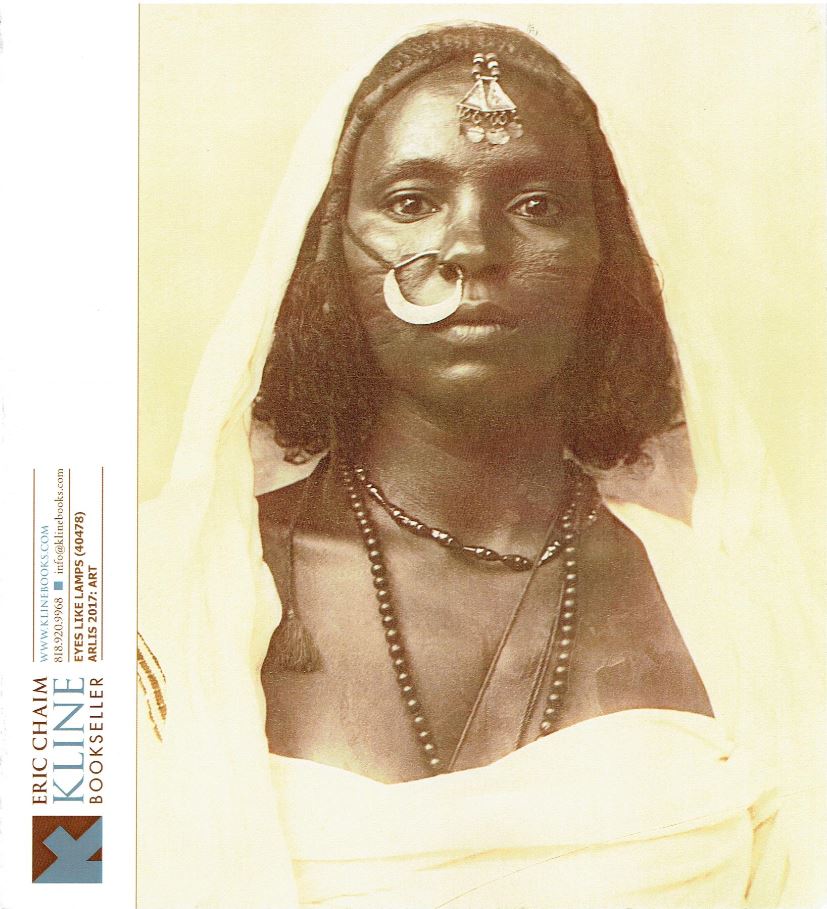 Eric Chaim Kline Bookseller has prepared a short catalogue, one lacking a title other than a small notation ARLIS 2017. ARLIS is the Art Libraries Society, which held its 2017 conference a little while back. This is a small catalogue, four pages in length, with just eight items. That is a minuscule portion of what Kline has available, the website noting their inventory contains 150,000 items. While their inventory consists of books in numerous fields, these eight items relate to art and architecture, predominately from the second and third quarters of the twentieth century. Here are some of those items.

Here is a book of portraits with a fascinating background. The book is Maria Lani, the model whose portrait appears 51 times in this book. Who was Maria Lani? That remains a question, even though it has been almost a century since this book was published in 1929. Perhaps this long ago description by art critic Waldemar George describes her best: "She is the autumn, the winter, the springtime and the summer, the past, the present, and the future, the north, the south, the east, and the west." That clears it up. She is everything, or perhaps nothing. Jean Cocteau said, "Every time I look away she changes...what a hypnotic force the woman has." Indeed she must have, as the portraits reveal an attractive, but hardly a ravishing woman. She may also have been a fraud, though that is unclear. Ms. Lani emigrated west from her native Poland. In 1928, she was in Berlin, an aspiring actress. The following year, she, her husband and brother were in Paris. It was there she contacted various artists, with Cocteau being the one most notably drawn in. She claimed to be an actress working on a film, her family members its producers. It was to be a horror film where portraits come to life. Therefore, she needed the artists to paint her portrait for use in the film. Ms. Lani must have been extraordinarily persuasive as 50 agreed. The list included many of the best known artists of the day – Cocteau, Matisse, Soutine, Roualt, Chagall, Derain and others. Charles Despiau created a sculpture, Man Ray took photographs. Only Picasso declined her entreaties. The film was never to be and it is unclear whether such was truly planned or an excuse. Maria Lani took the portraits on an exhibition tour to New York, returned to Paris, came back to New York during the war and worked at the Stage Door Canteen, where actors helped provide relaxation for returning soldiers. After the war, she returned to Paris, forgotten, and died in 1954, buried in a pauper's grave. This collection of Maria Lani portraits is uncommon, only 50 copies having been published. Priced at $2,750.

Next is a proposal, estimates, building design and other information for building a U. S. Consulate in Singapore. Eighteen photographs are tipped in. The prime designer was A. Quincy Jones. Jones went into business shortly after the Second World War. He quickly had clients, his specialty being housing developments. Jones was a pioneer in the concept of incorporating greenbelts into housing developments, making the places far more pleasant than the typical cookie cutter rows of houses in the developments of that day. Jones would later move on to designing office buildings and university structures, and as can here be seen, an overseas consulate. This proposal was created by Jones with his partner, Frederick Emmons, and Singapore architect James W. Ferrie. However, this consulate was never built. Jones was, undoubtedly, disconsolate. $3,500.

Here is a collection of 192 photographs of choreographic preparation for a performance of Orpheus and Eurydice in Leipzig on March 22, 1947. The choreographer was Mary Wigman. Mary Wigman was a German dancer who was a pioneer, some believe the most important figure in European expressionist dance. It was a movement away from the more structured classical ballet of the era. By 1920, Wigman had founded a school that would draw some of the future most notable dancers of the Weimar era to her school. Her student, Hanya Holm, would open a similar school in New York. The turbulence of the 1930's and the horrors of the Nazi era probably resulted in a diminished reputation for Wigman. In 1936, she choreographed a dance for the 1936 Olympics. She was neither a Nazi supporter nor opponent, while many in the arts were opponents or fled. Modern dance was hardly a Nazi favorite, but her school survived until 1942, protected by her relationship with an arms manufacturer. When that relationship ended, so did her school. She would go back to teaching dance after the war, and her reputation was such that she was called upon to choreograph this opera in 1947. The collection includes the program and photographs, mostly showing the flow of the opera from scene to scene, but there are 15 of Wigman, others showing her with her dancers, and two of conductor Heinz Bongartz. $9,500.

The young woman with the stylish piercing on the cover of the catalogue also graces the cover of a recent book of photographs: Eyes Like Lamps, published in 2016. The book features 374 photographs from the 5,000 image collection of Mohammed B. Alwan. Alwan is a professor and book seller/collector from Boston who put together his collection over the past 50 years. It captures the Islamic Near East, from Morocco to Turkey. The book is divided into chapters covering Desert, Markets, Women, Cities, Music & Dance, Heritage, Men, Transportation, Religion, Government, Crime & Punishment, Professionals, Street Scenes, Domestic Life, Rivers & Seas, Village Life, Children, Education, Altered Images, The Maghreb, Jerusalem, Albums, Slides, Stereoscopes & Panorama. The book was edited by Debra Lemonds and Eric Kline, with an introduction by Stephen Sheehi, and a forward by Mohammed B. Alwan. This is one of 60 copies printed. $1,500.