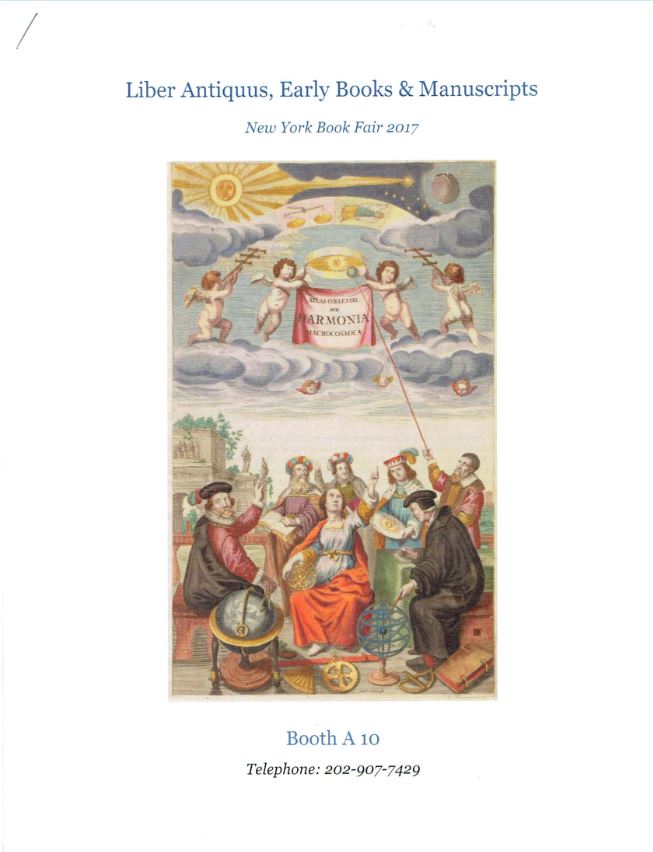 Books for the fair.

Liber Antiquus, Early Books & Manuscripts published a catalogue for the New York Book Fair 2017. Liber Antiquus takes the word "early" quite seriously. They don't mean 19th century. Material is primarily 16th and 17th centuries, some incunabula, and even pre-printing manuscripts. Latin is a common language with earlier works, but there are other Europeans languages and many items in English represented. Subjects vary. Here are a few samples of what you will fund.

In the time before light pollution dimmed the nighttime skies, or electric lights and various lit monitors provided indoor entertainment after dark, people were far more familiar with the constellations. There wasn't much else you could look at at night. The first printed illustrations of the constellations came in this book: Poeticon astronomicon, edited by Jacobus Sentinus and Johannes Lucilius Santritter, published on October 14, 1482. This was the first illustrated edition of this book, which must have been far less interesting without them. The woodcut illustrations came from various medieval sources, such as manuscripts and paintings, though the sources are not given. The text is ancient, that of Gaius Julius Hyginus, a freed slave of Roman Emperor Augustus, who placed him in charge of the Palatine Library. The text explains the myths behind the various constellations, which Hyginus had copied from earlier (lost) Greek texts. Item 84. Priced at $45,000.

Here is an atlas which also contains depictions of the constellations, but is focused more on the then competing theories of the solar system. Item 25 is the only celestial atlas produced during the golden age of Dutch cartography, the Harmonia Macroscosmica of Andreas Cellarius. This is a second edition from 1661 (after the first of 1660), published by the Amsterdam map publisher Jan Jansson. Cellarius tries to be objective in depicting the three competing systems of the time. There is the ancient Ptolemaic system in which the earth is at the center, the sun, planets, and moons revolve around it. Then there is the still revolutionary Copernican system, with the sun at the center, the planets circling around it. Finally, there is the compromise of Tycho Brahe. Brahe still put the earth at the center, with sun and moon revolving around it, but the other planets revolve around the sun. $450,000.

John Cotton was the first truly notable minister to migrate to America. He had a substantial following and reputation in England, but his nonconformist views and low esteem for church protocol forced him to go underground for fear of imprisonment. The notable Puritan preacher concluded it was time to go to America, which he did in 1633. He stayed in America the remaining two decades of his life. In 1647, he published this book, Singing of Psalms a Gospel-ordinance... Singing in church was controversial among some Christians, but the Puritans, for all their staid manners, believed one should sing out to God. In this work, Cotton not only defends the practice, but describes it as an obligation. Says Cotton, "...singing of Psalms with a lively voice is an holy Duty of God’s Worship now in the days of the New Testament." Item 33. $12,000.

This is a pioneering work in recognizing interrelationships between psychology and physiology. Not that Juan Huarte y Navarro had it all right. His book was published in 1594, and few had that much right when it came to science at that time. Item 80 is Examen de ingenios. The examination of men's wits, the first English translation. Huarte believed that people had just one talent. There were no polymaths in Huarte's world. Next, society needed to develop that one talent in each child at an early age. He proposed that experts examine children when they were young, and then, regardless of the child's desires, set them on a course designed to develop their one great skill. This, he believed, would enable Spain to move ahead of other nations in the development of great scientists, artists, and other professions. He also had some dubious scientific beliefs, stuff about wet brains vs. dry brains, warm vs. cold, physiological differences which determined mental capacities. It was his explanation why older people had more wisdom, younger ones learned more quickly, and, of course, women were inferior to men. $14,000.

What was running through the mind of William Parry is unclear. A British subject who found himself in frequent financial problems, one who seemed to bounce back and forth between being pro and anti-Catholic, a spy or even a double agent, he somehow managed to earn a few pardons along the way from Queen Elizabeth, once from a death sentence. Nonetheless, he apparently plotted her assassination, or maybe it was a fake plot to draw another in, so he could rat on him and gain more favors from the Queen. Whatever the reason, it didn't work. Authorities believed his co-conspirator, Edmund Neville, instead and Parry was convicted. Plotting to kill the Queen was not a good idea in the 16th century. Parry was hanged, unable to secure one more pardon from the Queen for obvious reasons. After his execution in 1585, this book was published to let everyone know what Parry had done, and perhaps serve as a warning to others: A True and Plaine Declaration of the Horrible Treasons Practised by William Parry the Traitor, against the Queenes Majestie. Item 46. $9,500.