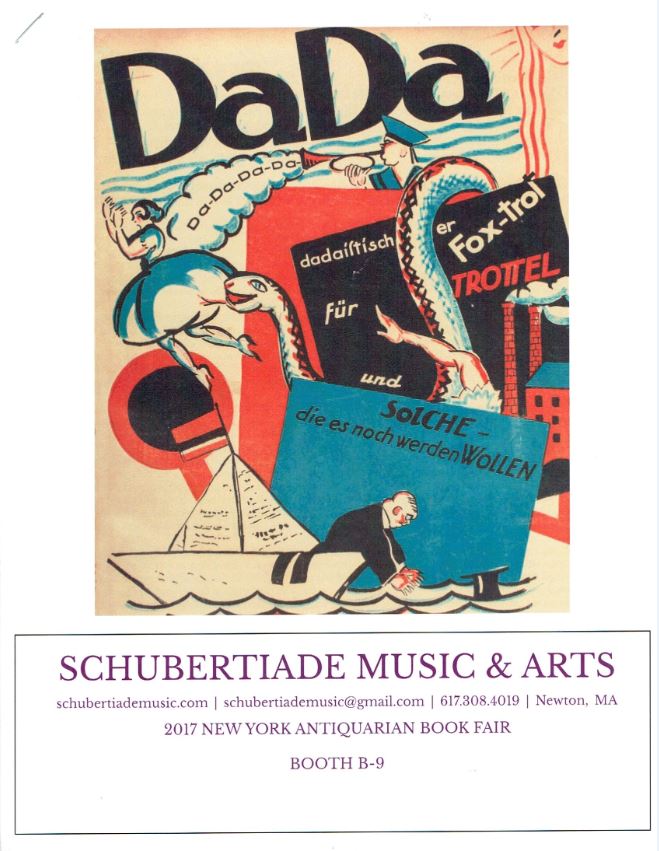 Music and art from Schubertiade.

Schubertiade Music & Arts issued a catalogue for the 2017 New York Antiquarian Book Fair. Schubertiade, not surprisingly, considering their namesake is Franz Schubert, specializes in music, but other art forms are also well represented. Literature, film, theater, dance, painting & drawing, history, and culture are also to be found. Within music, there is a range from classical to jazz to Broadway, and even rock (the Beatles and Bob Dylan). There is both printed material and personal manuscripts to be found. Here are a few samples from the catalogue.

First up we have the musical score to the Broadway play Show Boat, published in 1928. Show Boat was something of a breakthrough, a musical play more realistic than the typical lighthearted musical fare of the the day. It takes place on a "showboat," sort of a floating theater that plied some of America's rivers in the 19th century, the Mississippi in particular. The lyrics to the music were written by Oscar Hammerstein while the music was penned by Jerome Kern. The most famous song to emerge from the play was Ol' Man River. Show Boat was based on a book of the same name by Edna Ferber. This copy contains humorous inscriptions by Hammerstein and Kern to Samuel Marx. Samuel wasn't a Marx brother, but he was a film producer and screenwriter who had a long career in Hollywood. There is also a mounted letter from Ms. Ferber to Marx in the book. While Kern is best known for his music, in the book world he is known for his exquisite timing, selling his book collection at the peak in 1929, shortly before the stock market crash, which would depress prices for decades. Item 37. Priced at $6,500.

Item 3 presents an extensive look at most of the life of the noted mezzo-soprano Cathy Berberian. Her talents were such that numerous writers composed music for her, including her first husband, Luciano Berio, and Igor Stravinsky. Berberian was American born and went to school in New York, where she met another student, David Greene. They became lifelong friends, and even if personal visits were few, they corresponded for the remainder of her life. Offered is an archive of 88 letters she wrote to Greene, who would become a professor, writer and critic, from 1948-1982 (she died in 1983). In 1948, she visited Paris, where she came to recognize her opportunities: "I have a charming voice of a quality rare, artistic nature and infinite possibilities of future. With study I can become one of the great singers of our time." She determined to return to Europe, which she did in 1949, choosing Milan. While she would return to America on occasion to perform, Milan would be home for the remainder of her life. She married Berio in 1950 (they divorced in 1964), and her letters to Greene cover the growing success, mature career, and personal doings of Berberian through the rest of her life. $15,000.

Item 77 is original sheet music for Slavery Chains Am Broke At Last, lyrics by James A. Bland, music by Samuel Butler, published in 1880. This may be the only song celebrating the end of slavery by the prolific songwriter Bland. He was the first well-known African-American songwriter, though it is doubtful that many of the whites who loved his songs were aware of his race. Some of his songs still familiar today include Carry Me Back to Old Virginny, Oh! Dem Golden Slippers, and Hand Me Down My Walking Cane. Despite the success of some of his songs, and his being more appreciated when he toured overseas than he was in his homeland, Bland's life ended in obscurity and poverty. This piece was dedicated to Billy Kersands, perhaps the most successful of the black minstrel performers, who gave Bland his musical start. $350.

Next we turn to a work of art, of sorts. Perhaps comic art would describe these two ink drawings better. The artist was Elizabeth Tatham, who lived in Victorian England. We don't know much more about her, other than she possessed artistic talents and a sense of humor. One of the drawings is dated – 1868. In her pictures, Ms. Tatham pokes fun at the then very popular chignon hair style. This is where hair is coiled up in a bun at the back of the head. During this time, the chignons kept getting larger, with clips and other decorations placed within them. One of the drawings is labeled "Next hideous 'Sensation Chignon.'" In this one, a giant insect is clipped to the wearer's chignon. The other drawing is labeled "Horrible idea suggested by the Twisted Chignon." In this one, a coiled snake is placed in the coiled hair. Item 55. $1,400.

Item 80 is a copy of Die Unbesungen Helden (the unsung heroes), a 1957 book by Kurt Grossmann. Grossman's book is about German resisters during the war, heroes who resisted Nazi atrocities despite the personal risk at which it placed them. One of those resisters was Oskar Schindler, whose heroic actions were made known to the public through the Steven Spielberg 1993 movie Schindler's List. Schindler and his wife, Emilie, saved the lives of 1,200 Jews who worked in his factory from death in the concentration camps. It required all of his ingenuity, plus numerous bribes that dissipated his wealth, to protect his workers from extermination until liberation finally arrived. This book is remarkable as it is the only known book signed by Schindler. He has inscribed this copy to his wife in 1957, with the words (translated from German), "To my dear Mily in remembrance of her courageous time." $20,000.

Item 70 is the rare print of Paul Gachet's Vincent Van Gogh on his Deathbed, this copy inscribed by the artist to his son. Gachet (who used the name Paul van Ryssel for his artworks), was Van Gogh's physician. He had treated Van Gogh in a hospital a few weeks earlier. On July 27, 1890, Van Gogh, depressed through much of his life, shot himself with a revolver. He lingered for two days, and Gachet treated him as best he could. However, infections set in, and Van Gogh wished to die anyway. Gachet, who had become Van Gogh's personal friend and was deeply upset by his death, sketched two versions of this final remembrance. $10,000.