A Miscellany of Unusual Material from The Brick Row Book Shop 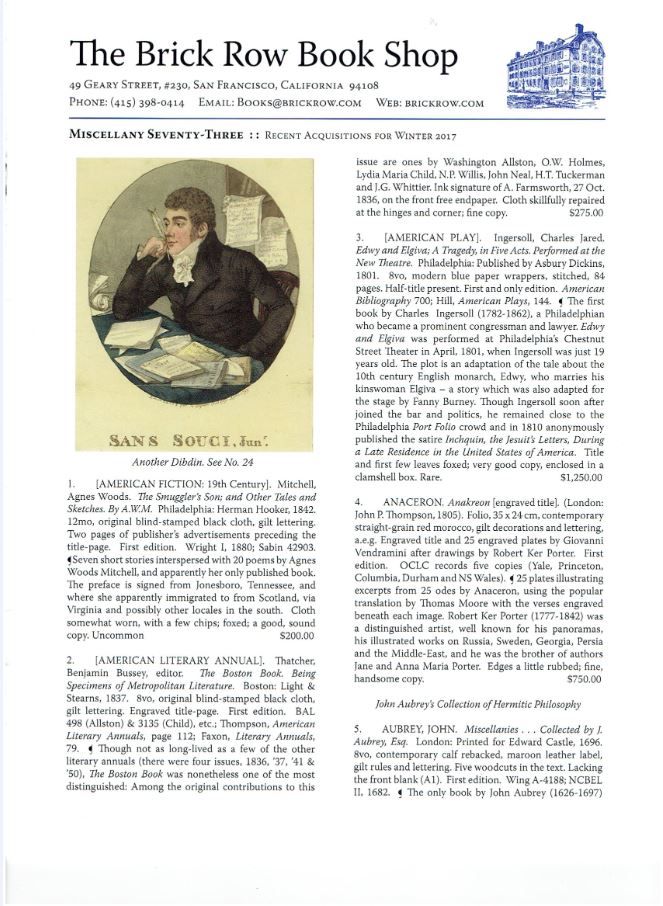 The Brick Row Book Shop has issued Miscellany Seventy-Three: Recent Acquisitions for Winter 2017. What can you say about a miscellany that isn't already expressed in that one word? We can add one thing here. This is not a miscellany of common items, the well-known books, the famous authors. There is much that is obscure, undoubtedly quite rare. This catalogue is more a treasure hunt than simply a description of treasures. You will discover new and often fascinating material here. Something old is something new. Here are a few samples

We start with a 19th century gift book, and an unusual one at that. The artwork it features consists of images of snowflakes. The title is Cloud Crystals: A Snow Flake Album. Collected and Edited by a Lady. Snowflake collections don't last long, so the "Lady," Mrs. Frances Chickering of Maine, had to quickly create her own images before they melted. Over the course of Maine's long winters, Mrs. Chickering noticed the different shapes when they fell on her windowsill. To preserve their likenesses, she did what generations of children have been doing since. She allowed them to fall on a dark cloth and then placed a strong magnifying lens over them. She would then pull out a piece of folded white paper and scissors, and cut the flake's shape from memory. Finally, she would use the cut pattern to stencil the snowflake images. In her book, they are displayed on a dark background so as to stand out. There are 26 plates, each plate with several snowflakes. Along with Mrs. Chickering's images, there are various poems and prose writings pertaining to snow and snowflakes by notable writers within the album. Item 20. Priced at $375.

Next up we have a pair of unique, rather amazing books of art and poetry. However, these are not printed books, but two manuscript notebooks of original poetry by Joseph Ely of Bristol. So little is known of Mr. Ely that while it was generally believed he came from Bristol, Connecticut, the New York Public Library (which has some of his work) noted that the "Bally & Co., Bath" on the paper makes it more likely he was from Bristol, England. As intricate as his work was, Mr. Ely was still quite prolific. These two notebooks, dated 1816 and 1819, contain 11 and 13 leaves. On them, Mr. Ely has written original poems on various subjects, apparently less than memorable. However, he has employed his calligraphic talents in lettering the poems. What is even more impressive is each is contained within an intricate, ornate and unique circular frame, hand drawn in brown with pen and ink. It must have required some serious work, and yet a "Poetical Preface to the Reader" to the 1816 volume says he had written 229 compositions within 591 borders, contained in 23 books. He must have had the skill to do these with greater speed than seems imaginable to me. Those contained in libraries range from 1817-1823, so presumably those earlier ones he mentions here were lost. It seems he must have done this for his own amusement, or perhaps to give to friends, though none of the volumes known contains a presentation inscription. Item 28. $2,500.

William Prynne was a man of controversial opinions, intolerance of differing views, and a willingness to take whatever punishment his behavior incurred and come back for more. He was constantly writing attacks on others, either about specific individuals or types of people in general. His words were rarely kind. Prynne was a Puritan in early 17th century England, a pamphleteer and politician. Item 61 is one of those works: The Unlovelinesse, of Love-Lockes. Or, A Summarie Discourse, Prooving: The Wearing, and Nourishing of a Locke, or Love-Locke, to be Altogether Unseemely, and Unlawfull unto Christians, published in 1628. It is an attack on the then current fashion of men having one longer lock of hair, which he condemned as unnatural, odious, sinful, effeminate, unmanly, womanish, abominable, Satanic, and such. Prynne did not mince words. He also condemns women who wear their hair short for being mannish, unnatural, impudent and unchristian. However, he also condemns them if their hair is too long, or they wear make-up, and for their "inordinate affection of corporall beautie." Prynne wrote other such diatribes, and is particularly noted for one against the theater just as the Queen was sponsoring a play. It got him one of multiple life sentences in prison (he always got out in a few years) and his ears cropped off (the stubs were later removed after another such verdict). He regained influence during the revolution, but attacks against Cromwell had him back in prison again. He finally managed to stay out of trouble and regain some measure of respectability during the Restoration. Item 61. $1,500.

Here is another man of great principles, willing to put his reputation on the line for them, who also wrote a scathing attack, this one targeted at a specific individual. It was not good for one's popularity in America for that the person be, of all people, George Washington. Thomas Paine always spoke (or wrote) his mind. Paine was an American hero in 1776, his call for independence and freedom a rallying cry for the colonies. He returned to his native England after the Revolution, his advocacy for democratic causes, and support of the French Revolution, making him persona non grata there. He moved to France. Paine was elected to the National Assembly, but then the French Revolution turned bloody, he was imprisoned, and like so many others, would have had his head separated from his body save for a lucky miscommunication when he was supposed to be taken away. He managed to survive a little longer until Robespierre was overthrown and he was freed. Paine emerged from prison holding a grudge against some Americans for not making a greater effort to free him. One whom he believed conspired with Robespierre to imprison him was George Washington. Paine sent him a scathing letter, and when Washington failed to respond, he had the letter published. Item 54 is a copy of that Letter to George Washington, President of the United States of America, published in 1796. Like Prynne, Paine did not mince words, calling Washington a fraud, incompetent general, elitist, lacking in gratitude and humanity, and similar niceties. When he wore out his welcome in France and returned to America a few years later, his support of the French Revolution and attack on Washington made him a pariah in the land that once adored him. He did nothing to reestablish his good graces by following up with an attack on religion. Writing about his death in 1809, and a funeral attended by all of six people, Robert G. Ingersoll remarked, "Even those who loved their enemies hated him." $1,500.

Here is an item of obscure poetry: The Overland Route to California, and Other Poems, by John Ward. Had this been written a decade earlier, it would have represented the product of a difficult and dangerous Oregon Trail journey. However, it was published in 1874. Ward took the train. Still, what little I can find of him displays he was a brave man, serving nobly in the Civil War with a New York regiment. He had degrees as both a lawyer and medical doctor, but I have not ascertained which, if either, of these he used to earn a living. Along with the title poem, there are twenty others covering various subjects. Item 14. $200.