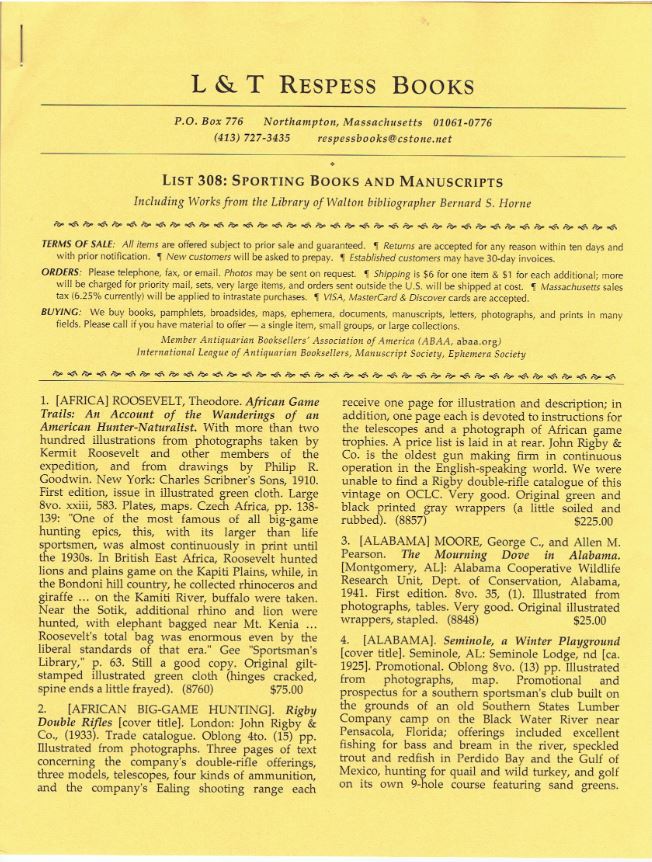 L & T Respess Books has published their List 308: Sporting Books and Manuscripts. These are not the team sports where we watch highly paid athletes endlessly on television today. These are more the individual type. There is lots of hunting, particularly the big game variety, a little golf, a little mountain climbing, and a whole lot of fishing. The first sporting books, going back to the first few decades of printing, were fishing books, or angling as it is often called. Within the category of fishing, a great many of the books pertain specifically to fly fishing. With that, we will take a look at a few of the over 200 sporting books offered.

We begin with a book that both is and is not the oldest book in this catalogue. It was published in 1903, which actually makes it one of the more recent, but it is a limited edition of a book that was published over four centuries earlier. That was back before they knew how to spell (by our standard): The Treatyse of Fysshynge with an Angle from the Book of St. Albans. The book is attributed to Dame Juliana Berners, about whom little is known, even whether she actually existed. There was a Berners family in England at the time the book was first published by Wynkyn de Worde in 1496, but whether she is connected is unknown. A woman is depicted in the book with her fishing pole who may be Dame Juliana. This was the first book on fishing printed in the English language. Item 18 is one of numerous later, limited editions of this book. It was printed at the Gillis Press for Charles Scribner's Sons, one of 160 copies on hand-made paper. Priced at $500.

From the first angling book in England we go to the first such book written and published in America: The American Angler's Guide. Being a Compilation from the Works of Popular English Authors from Walton to the Present Time. The book was put together "by an American Angler," who was John J. Brown. This is the very scarce first edition, published in 1845. The book notes that it was sold by Brown's "Angler's Depot" in New York and contains five pages of ads for his business. This copy was rebound in 1959 in full blue morocco with gilt rules, ornaments in the corners, an angling device in the center, and other features by Thomas W. Patterson, binder for the Hunt Botanical Library. Item 26. $1,250. A copy of the almost as rare second edition of 1846 is also available. Item 27. $600.

There aren't too many better known sportsmen than Hemingway. Well, this isn't the Hemingway of whom you're thinking, but close. Item 84 is Misadventures of a Fly Fisherman: My Life with and Without Papa, by Jack Hemingway. Jack was "Papa" Ernest Hemingway's son. He looked a lot like his father, but Jack was an easy going guy, not the image of his constantly driven to prove something or other father. He loved fishing. After working in New York for a while, he moved to Idaho, his father's last home. There, he was an active conservationist, writer, and fly fisherman, not necessarily in that order. He was the father of actresses Margaux and Mariel Hemingway. This autobiographical work was published in 1986. $15.

Here is a book with a letter (from Theodore Roosevelt) with a bunch of stories to go with it. The book is entitled Hunting Expeditions of Oliver Hazard Perry of Cleveland, Verbatim from his Diaries, published in only 100 copies for private distribution in 1899. Even then it was hard to find. Oliver Hazard Perry was a naval commander and American hero of the War of 1812. However, as with Hemingway, this is not the Oliver Hazard Perry who is famous. In fact, this Oliver Hazard Perry isn't even related to the other, though he was undoubtedly named for him. He was something of a character, who did a lot of hunting (and drinking) in Ohio and surrounding areas in the middle of the 19th century. By the time his diaries were published in 1899, Perry was long gone. This copy was owned by Dean Sage, who I am guessing is the son (perhaps grandson) of wealthy New York businessman and benefactor of Cornell University Henry Sage, though I am uncertain. Sage had sent a copy of this book to then Vice-President Roosevelt, who sent the enclosed typed and signed letter back dated November 28, 1899. After thanking Sage for "getting me Perry's book," Roosevelt, the critic, writes, "I am very much pleased with it, but I wish to Heaven that the pictures had some of them better chosen! The publisher has put in the picture of a fallow buck, a European hedge hog, and on the outside cover, the head of a European stg. Why could he not have put in the heads of American game? Do you think he would be hurt if I pointed this out?" Those were animals Perry hunted, but obviously the American species. Perhaps Roosevelt was better at distinguishing between the two than was the publisher. Item 147. $5,000.

Of course, Roosevelt was himself a sportsman, conservationist, and hunter. He went for big game, the bigger the better. Roosevelt, enormously popular and a shoo-in for reelection, for inexplicable reasons decided not to seek the presidency again in 1908. He was still only 50 and hardly the retiring type. So instead, he planned an enormous African safari. He loved hunting but he had more in mind than bagging a few (actually quite a few) trophies. This would be a research expedition on behalf of the Smithsonian as well. It would also keep the retired President in the public eye. Roosevelt, his son Kermit, a bunch of scientists, hunters and others, along with a couple hundred porters picked up on the way, descended on the African wilds only a few weeks after T. R. left office. What they brought back was astronomical. There were 11,500 animal specimens, though this included insects and such as part of the research. Still, there were about 1,000 large animals, 500 qualifying as big game – lions, elephants, leopards, rhinoceroses and such. Roosevelt bagged a whole lot of them, his son almost as many. It was an enormous haul, even by the big game hunting standards of the day. Item 1 is Roosevelt's account, published in 1910: African Game Trails: An Account of the Wanderings of an American Hunter-Naturalist. This is a good, but not great copy. $75.