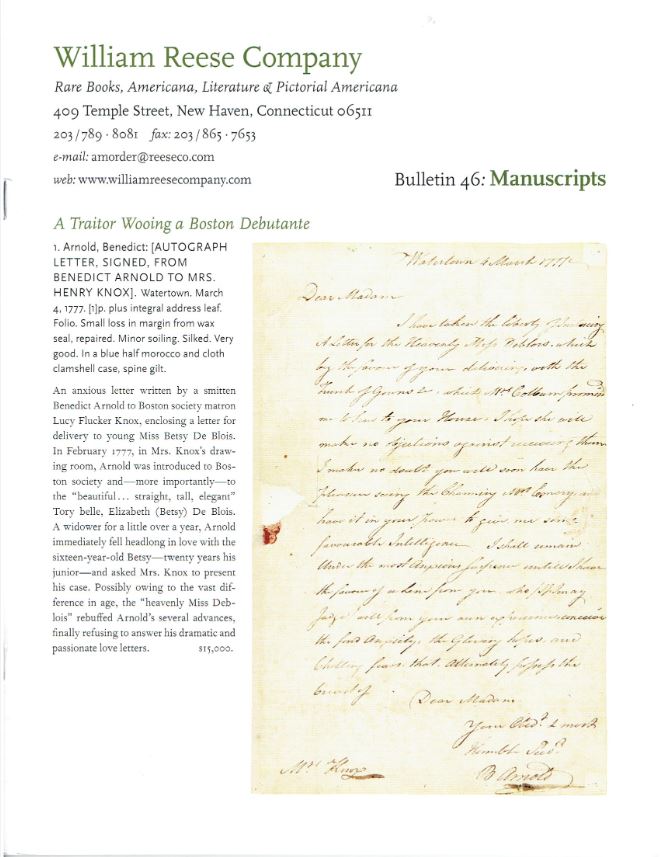 Manuscripts from the William Reese Company.

The William Reese Company has issued their Bulletin 46 of Manuscripts. It contains 34 items filled with handwritten notes. Many are historically significant and often fascinating to read. Most are of American origin or pertain to America. Not every one of those is from people beloved in America, such as the love letter from Benedict Arnold portrayed on the cover, but he was part of the country's history, good and bad. Here are a few selections.

That love letter from the lecherous old patriot soon-to-be traitor was written by the 36-year-old General to Lucy Knox, requesting she be a go-between to 16-year-old Betsy De Blois. Arnold had met Miss De Blois at the Knox home shortly before. In 1777, the recently widowed Arnold was still known for his victory at Saratoga, not the treachery that would later come. He sent Mrs. Knox a letter and trunk full of gowns to be delivered to the "beautiful...straight, tall, elegant...heavenly Miss Deblois." Miss De Blois rejected his advances and the following a year, the disappointed Arnold married Peggy Shippen of the Pennsylvania loyalist family. Item 1. Priced at $15,000.

How would you like an invitation to dine with the President? Before you answer, how about if it were President Thomas Jefferson? Here is such an invitation, but sadly, it wasn't written to you. Instead, it went to William Keteltas. It is a partially printed document, not all that personal. The printed part states, "Th: Jefferson requests the favour of _____ to dine with him ______ at half after three." The first blank is filled in with "W. Keteltas," the second with "on January 18th." Since the dining was to take place at the White House, it must have been some year from 1801-1808. Keteltas was an excitable, extremely pro-Republican (Jefferson's party) lawyer from New York with a reputation for always getting into battles with the other side. Either that, or attempts to secure appointments in the Jefferson administration, likely explain the invitation. As to what meal Jefferson had at 3:30 in the afternoon, I am uncertain – late lunch, early dinner, snacks? Perhaps he got a deal on an early bird special. Item 17. $3,250.

Johann (John) Sutter, a native of Switzerland, arrived in California in 1839. He obtained a land grant from Mexico for wilderness along the Sacramento River. He built a fort and created a settlement, which he called New Helvetia (now known as Sacramento). Despite the land grant, Sutter was evidently not pleased with Mexican rule as he supported the Bear Flag Revolt. However, Anglo Californians quickly joined the American side in the Mexican War. Sutter gave American forces under John Fremont access to his fort. On April 24, 1847, Sutter wrote this letter to his friend Fremont apologetically requesting compensation for the fort and the aid he provided to immigrant families (including survivors of the Donner Party). What no one knew at the time was that the following year, gold would be discovered at Sutter's mill, built to produce lumber for his settlement. That would be the end of attempts to create an agricultural settlement on the land. As a result of the find, the California Gold Rush was on, and the land would soon be overrun with prospectors. Item 30. $27,500.

Item 26 is a "spectacular" illustrated album from the British Challenger Expedition of 1872-1876. The Challenger Expedition was a scientific mission to discover information about the ocean, its depths, composition, temperatures, sea life, and more. Thousands of new species of plants and animals were discovered along the way. Eventually, 50 volumes worth of collected data would be published. The expedition crossed the Atlantic, dipped almost as far south as Antarctica as it rounded South America, crossed the Pacific to Australia, went as far east as Hong Kong, then to the Philippines, Japan, Hawaii, and back around South America on its way home. Along the way, it stopped at numerous ocean islands, most of which you will not recognize. It's route was hardly direct, backtracking or circuitously reaching various destinations as it sought to gather many ocean readings. One of those who participated in the entire journey was Benjamin Shephard. He was not the official artist, but rather, a cooper (barrel maker). Nonetheless, the man was a talented artist. His album contains 36 leaves, an illustrated (but uncolored) title page, and 35 pen and watercolor colored illustrations on the remaining pages. There are many images of the Challenger and other ships at various islands, port and coastal views, forts, towns, lighthouses (in the background), dredging the seafloor, a storm in the Gulf of Mexico, and several of icebergs near Antarctica. $150,000.

Declaration of Independence signer Dr. Benjamin Rush had to be brave enough to take some major risks in his life. Signing his name to that document put him in obvious danger during the Revolution. Then, during the yellow fever epidemic in Philadelphia, he stayed in the city to minster to the sick despite the grave personal risk. However, we see he still worried about rather mundane perils. In 1803, he wrote to his wife, Julia, who was away, recounting news from Philadelphia and work on her "little farm." He then goes on to say, "John unkindly took my umbrella with him & left me a note to buy another for myself. I have not time to do so, nor do I know where to borrow one. From the want of it I have suffered from the rain this evening. To him it was an article of dress; to me it was a necessity of health." Having been tough enough to survive the epidemic, Rush survived the rain, living another ten years. We aren't sure who John was, other than a nervy guy, but Rush had 13 children, one with that name (and others with just about every other imaginable name), so he seems a possible culprit. Item 25. $3,750.