A Varied Selection from the Heritage Book Shop 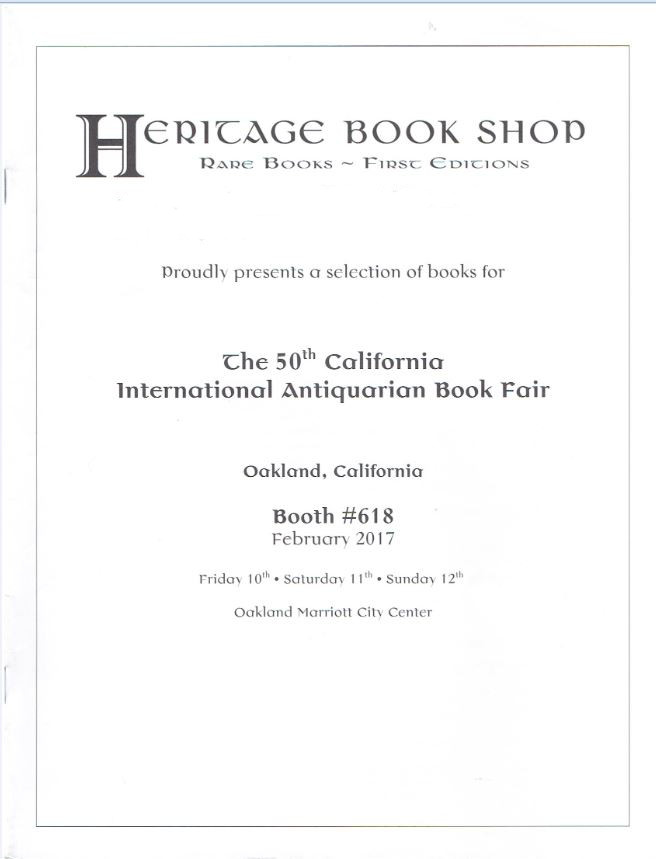 The Heritage Book Shop prepared a catalogue especially for the not too long ago 50th California International Antiquarian Book Fair. Heritage is a long-time southern California institution, recently having moved to Tarzana, a little outside of L.A. They specialize in fine, rare and unusual books from the 15th-20th centuries. That leaves their selections open to a wide array, but these are all books of interest and significance. Here are a few of them.

We will begin with as close as you will ever come to owning the first book ever printed, a Gutenberg Bible. I don't know that a Gutenberg Bible will ever come on the market again, but occasionally you can find a page or two. Here is one from a leaf book that was published in 1921. Bookseller Gabriel Wells had obtained an incomplete copy which he used to create the book A Noble Fragment. Being a Leaf from the Gutenberg Bible 1450-1455. Wells had enough leaves to create 600 copies of his book, which he had designed by one of the best in the business, Bruce Rogers. A bibliographical essay by A. Edward Newton was included, along with, of course, the Gutenberg leaf. Priced at $85,000.

This book combines one of the 20th century's great writers with one of its great artists. It also may be the most significant book published by the legendary Limited Editions Club. Club founder George Macy's goal in founding it was to combine exceptional editions of classic works with artwork by notable artists and illustrators. This was his piece de resistance. The book is Ulysses, this edition published in 1935. Ulysses was barely a teenager at the time, having first been published 13 years earlier, but was already recognized as a classic. To provide the illustrations, Macy brought in Henri Matisse, the famed French painter. Matisse's illustrations were not so much based on Joyce's book as they were on the Odyssey, but Ulysses could be considered an odyssey with a small "o." One suspects it may be that Matisse didn't read Ulysses – it isn't easy. The Limited Editions Club printed 1,500 copies, and they were to be signed by both writer and artist. Matisse signed all 1,500, but Joyce stopped at 250. It may have been because he wasn't pleased with Matisse's illustrations, though this is not clear. Offered is one of the 250 copies signed by both. $22,500.

This is the first and scarcest work published by Robert Louis Stevenson. He would go on to be one of the 19th centuries best known novelist-poets, but in 1866, he was a mere lad of 16 living at home. The title is The Pentland Rising: A Page of History, 1666. It is a pamphlet based on the history of the Scotch Covenanters, learned from stories Stevenson was told as a child. His father had the book published and bought up most of the copies. The size of the run is not known but it was not long. Likely, it was only small double digits. The family later sold his father's copies after Stevenson became well known. $5,000.

Here is another author's first work, but in a case of the first shall be last, it was her last novel to be published. This is The Professor, A Tale. It is attributed to Currer Bell, but of course that was a pseudonym. When Charlotte Bronte and her sisters first began publishing books, they were afraid women authors would not be well received, so they all used pen names that were gender neutral, so readers could think what they wanted. By 1857, when this book was finally published, there was no need to disguise Charlotte or her sisters, all of whom had died by then, but the novel was originally distributed to potential publishers in 1846 under the name Currer Bell. $7,500.

We all know Thomas Paine's Common Sense, a call for democracy and independence for England's American colonies. Less well known is this rebuttal: Plain Truth, Addressed to the Inhabitants of America, containing, remarks on a late pamphlet, entitled Common Sense. To the victor goes the spoils, and being remembered as well. The book was attributed to "Candidus," but the actual author of this 1776 response was wealthy Maryland planter James Chalmers. Chalmers argues that the colonists are highly indebted to the British and that democracies usually fail. He does make an interesting point, though. He says that none of the great powers, such as France and Spain, will come to the aid the colonists as they will be fearful of starting movements for democracy in their own countries. He was incorrect that they would not provide aid, as help from France was critical to the revolution's success, but King Louis XVI might have had second thoughts later when revolution broke out in his own country. Chalmers had a point. He would later write another attack on another Paine book, but this time from his new home in London. $7,500.