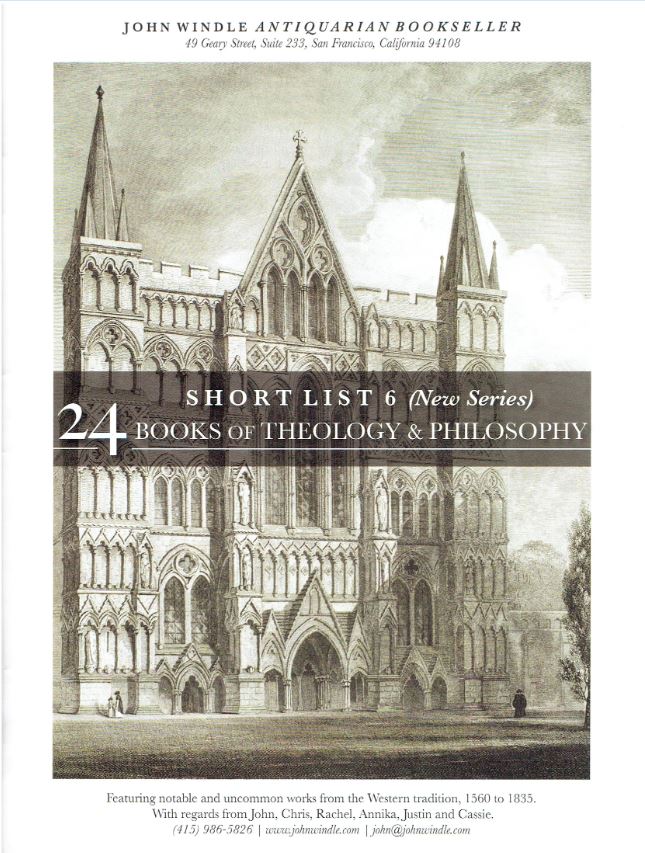 John Windle Antiquarian Bookseller has released a catalogue of 24 Books of Theology & Philosophy. To continue, the description says, "featuring notable and uncommon works from the Western tradition, 1560 to 1835." These are serious and weighty tomes, often telling us how people viewed their faith in earlier centuries. The Bible hasn't changed, but our interpretations often have. That does make you think. Here are a few samples from this selection.

We begin with the first printed Bible... sort of. No, Windle doesn't have a Gutenberg to sell, but he has the next best thing: The 500th Anniversary Pictorial Census of the Gutenberg Bible, by Don Cleveland Norman, published in 1961. That sounds like about half a dozen years late for a 500th anniversary celebration, but on a percentage basis it's close enough. This is copy #117 of a limited edition of 985, signed by the author. It contains a huge number of pictures of extant copies of the first book ever printed. Norman conducted a census of all copies, fragments, and single leaves known at the time. While leaves and some fragments have changed hands since, my guess is that few if any complete copies have. The book also contains a description of Gutenberg's life and his work by Aloys Ruppel. Item 2. Priced at $799.

From the first printed Bible we now turn to the first complete printed English Bible, and the first Bible of any sort completely translated to English. Item 3 is a leaf book by Allen P. Wikgren entitled A Leaf from the First Edition of the First Complete Bible in English, The Coverdale Bible... The leaf was printed in 1535, but the rest of the book comes from 1974. It is unknown for certain where the Coverdale Bible was printed, but it was somewhere in Europe, not England. Myles Coverdale found it prudent to go into exile as King Henry VIII became more and more erratic. Much of Coverdale's Bible was based on the translation of the New Testament (and parts of the Old) by William Tyndale, who was executed by Henry in 1536 for publishing it. And yet, by 1538, Henry authorized the printing of Coverdale's Bible in England. This leaf book was limited to 424 copies, and the leaf in this copy is from the deuterocanonical (part of the Christian Old Testament but not part of the Jewish Bible) Book of Judith. Wikgren's book includes a census of extant copies of the Coverdale Bible at the time. Item 3. $1,000.

This next book was written by a man who was well known in America in his day, but not for theological reasons. Joseph Galloway was a noted Pennsylvania politician in colonial days, closely associated with Benjamin Franklin. He was a delegate to the Continental Congress in 1774. By this time, the colonists were more than a little upset with the British, revolution already in the air. Galloway tried to work out a compromise that would alleviate the colonists' objections while keeping the colonies tied to Britain. With the Americans upset about having no representatives in Parliament, and the British unwilling to give them any, Galloway proposed a separate American Parliament with each Parliament having a veto over the other's actions in America. That might have been sufficient earlier, but not by 1774. His plan was rejected. Unlike Franklin, Galloway turned more to the Loyalist side as the two divided. He remained loyal to England after the Revolution began, and went into exile there in 1778. His property in Pennsylvania was seized. After independence was won, Galloway stayed in England, never to return. So what did he do in his new home? He wrote theological treatises, such as this one: Brief Commentaries Upon Such Parts of the Revelation and Other Prophesies as Immediately Refer to the Present Times... published in 1802. This copy is inscribed by "the Author" to Elizabeth Roberts, possibly his daughter. In this book, Galloway identifies connections between Revelations and then current events such as the French Revolution. Item 13. $450.

This is not a book from what most would call a mainstream church: The Trial of Joanna Southcott, during Seven Days...of December, 1804. Joanna Southcott was a prophet, or so she claimed, the self-styled "woman clothed with the sun." That is a quote taken from Revelations 12:1. She could foresee the future. You may not believe so, but at the height of her influence, 100,000 people believed she could. Her trial was not one by civil or even ecclesiastical authority for blasphemy or the like, but the trial of the Holy Spirit directing her mission to the uninformed. She made a living by selling seals that assured the purchaser would be one of the 144,000 who would receive eternal life. She sold them for 12 shillings, which sounds like a fairly good deal for eternal life to me. Her final major revelation may have been Joanna Southcott's downfall. She prophesied that at the age of 64, she would bear a son who would be the Messiah. Revelations 12:2 speaks of the woman "clothed with the sun" having a child who would rule the world and be called up to heaven. Despite her prophesy of having a child, Joanna Southcott failed to deliver. Followers said that her son was immediately taken up to heaven, explaining the absence of a child, but within two months, she was dead. Her following dropped precipitously, but some still followed, and a small group of Southcottians still existed in England as recently as a few years ago, and some may still exist. An unfulfilled end-of-the-world prophesy for 2004 may have been the last straw for the movement. Then again, the way things are going, maybe she was just a few years early in her prediction. Item 21. $400.

This catalogue was published in conjunction with another theological collection offered by Philadelphia Rare Books & Manuscripts. A review of that catalogue can be found by clicking here.