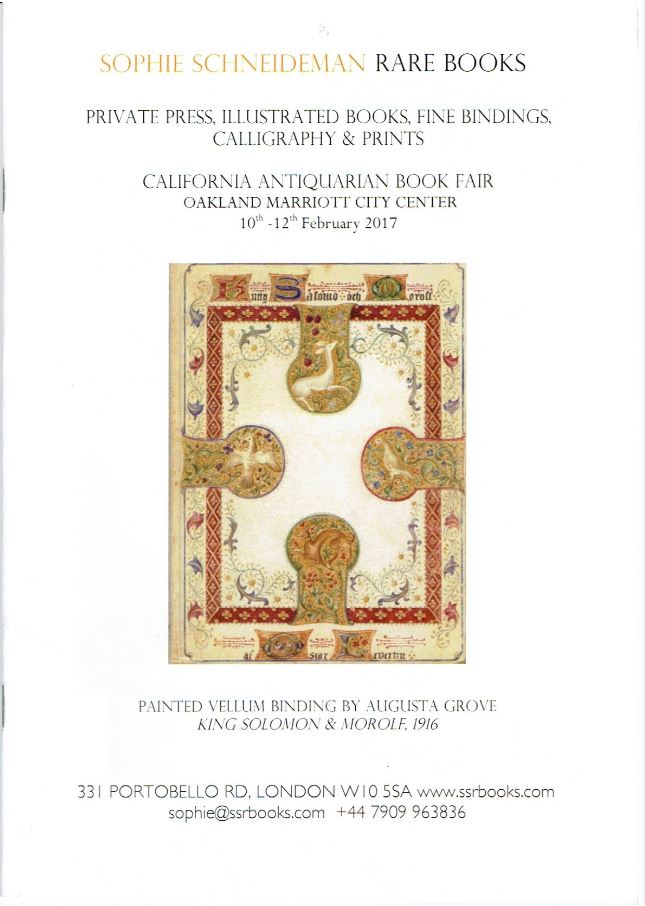 The book arts at a book fair.

Sophie Schneideman Rare Books prepared a catalogue for the California Antiquarian Book Fair entitled Private Press, Illustrated Books, Fine Bindings, Calligraphy & Prints. These are selections from what is generally known as the book arts. As such, I find them difficult to describe. Books focused on their text are more amenable to descriptions with words than is art. Not even a thousand words are worth a picture, but I will try just the same.

The granddaddy of the private press movement, and still the standard, is William Morris' Kelmscott Press, so this is a logical starting point. Morris is noted for his art, writing, close association with the Arts and Craft's movement, being an ardent socialist, and in the last years of his life, founder of the Kelmscott Press that followed traditional production methods to create beautiful books. The Kelmscott Press only operated for the final five years of Morris' life, plus a little longer to wind down operations. Morris died in 1896. Here is one of those books, one of 250 copies, published in 1893: The Life of Cardinal Wolsey. Thomas Wolsey was born of an unremarkable family in 1473, but after being ordained a priest, he rose rapidly in the church hierarchy. He entered the service of King Henry VII in 1507. Two years later, the King died, and Wolsey became a close advisor to the new King, Henry VIII. In 1515, Wolsey was appointed a Cardinal, securing the highest positions in both church and state. All went well for him until Henry wished to have his marriage annulled. Wolsey interceded with the Pope on his behalf, but was not successful. Henry blamed Wolsey, banished him, then called him back to London to face charges of treason. When Henry turned on his friends, his anger was fatal. However, he never had a chance to execute Wolsey. The Cardinal died of natural causes on his trip to London. This account of Wolsey's life was written by George Cavendish. Cavendish knew Wolsey well as his loyal aid. He remained loyal to Wolsey to the end, but was spared a similar fate as his loyalty to Wolsey was respected, even if Wolsey himself was not. Priced at $2,950.

Here is a less expensive way to own a production of William Morris, from the cause even dearer to his heart than fine printing – socialism. It didn't come from the Kelmscott Press, but this was more about message than art. It is a 16-page pamphlet of Chants for Socialists, written by Morris. Such favorites as The Day Is Coming, No Master, All for the Cause, The March of the Workers, and Down Among the Dead Men are found in this 1885 publication. These chants were actually placed to music on an album in 2015 by British singer Darren Hayman, with whom, I must admit, I am not familiar. The chants were published by the Socialist League, which was formed the prior year. Along with William Morris, league membership included some very familiar names to the cause – Friedrich Engels, and Karl Marx's daughter, Eleanor (Karl died the previous year or he probably would have been there too). The league was very active in the late 1880's, but its members drifted off to other groups after that. $250.

This next item combines a classic, very old sporting book with one of the early fine, private presses. The book is A Treatyse of Fysshynge wyth an Angle, by Dame Juliana Berners. You can tell by the spelling this was a very old book. The first edition goes all the way back to 1496 and the press of Wynkyn de Worde (they used a lot more "Y's" in 1496). It is remarkable that such a book was written by a woman that long ago, but truth be told, no one is certain Dame Berners actually wrote it, or that she even existed, for that matter. Still, one of the illustrations displays a woman with a fysshynge pole who, presumably, is supposed to be Dame Berners. The copy offered came from the Ashendene Press and was published in 1903. Ashendene was formed in 1895 by Charles Harold St. John Hornby. St. John Hornby operated a small, family run press for forty years. He took his time with his books, printing on average just one a year. In this edition, Ashendene has provided illustrations from the woodcuts in the original edition. $1,900.

After forty years, St. John Hornby decided that was enough. He closed his press, but not before saying goodbye to his fans. This is a four-page notice in red and black headed A Farewell Notice to the Subscribers to the Books of the Ashenedene Press, published in 1935. $160.

Next we have King Solomon and Morolf, written by Oscar Levertin and published in 1905. Levertin was a Swedish poet (he also wrote prose) from the turn of the century. This is said to be his finest work, though I am in no position to judge. It is based on an old tale, pitting the wise King in debate against the fun-loving peasant Morolf. However, this book appears in this catalogue not so much for its content as its binding. It has been bound in white vellum and illuminated with hand painting on the covers and spine. The artwork was done in 1916, with the artist being Augusta Grove. I have not been able to find any information about Ms. Grove but she obviously was a quite talented artist. $2,950.

This item is unrelated to everything else in this catalogue save for it being an illustrated book. It is not a work of art, being absolutely horrifying to look out. However, it is also the most important book in this catalogue, a reminder of one of the worst examples of man's inhumanity to man – the Holocaust. The title is KZ : Bildbericht aus funf Konzentrationslagern (photo report from five concentration camps), published in 1945, just after the conclusion of the war in Europe. The pictures are horrific, including piles of stacked bodies photographed when the Allies liberated the camps. One famous picture shows future Nobel Laureate Elie Wiesel packed with many other emaciated men in bunks at Buchenwald. There are 44 pictures in this 32-page pamphlet produced by the American War Information Unit. It was printed for the purpose of letting the German public know exactly what was going on in the Third Reich. $1,620.