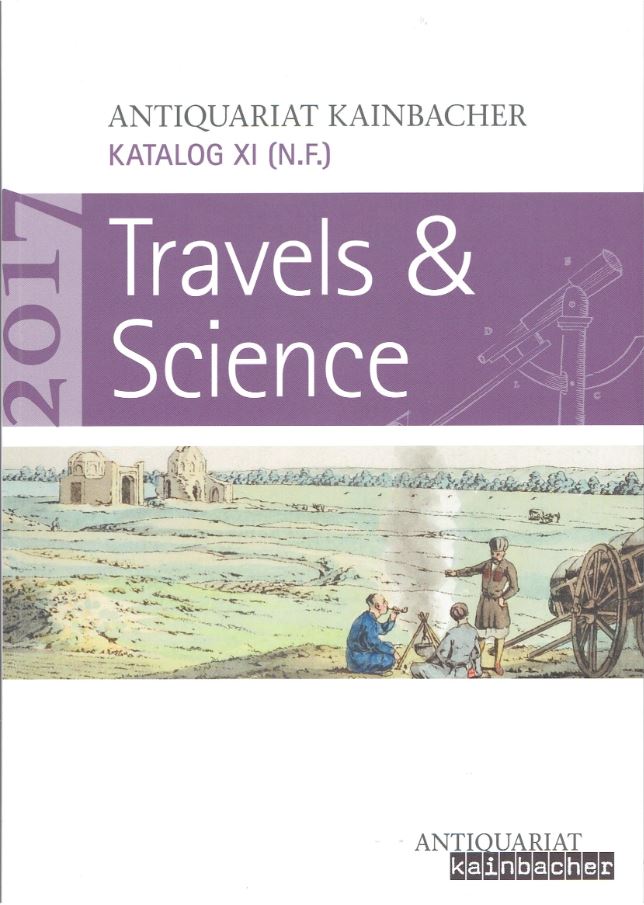 Antiquariat Kainbacher has published their Katalog XI, titled Travels & Science. A language warning before we start – while the title is in English, not much else is. The catalogue is written in German, as are most, but not all of the books within. Familiarity with the language, naturally, is helpful. It is divided into three sections: Natural Science and Technology, Rare Travel Reports, and Ethiopia. Here are some samples of the material found in this latest Kainbacher selection.

We start with a man whose name is now generally heard in conjunction with the word "effect." Christian Doppler was an Austrian physicist who studied the motion of binary stars. He came upon an important discovery, explained in this 1842 text, Ueber das farbige Licht der Doppelsterne und einiger anderer Gestirne des Himmels (On the colored light of the twin stars and some other stars of heaven). Motion either expands or contracts light waves, slightly changing the perceived color of the objects. He was able to use this phenomenon to determine speed and motion of distant stars. He didn't quite have it right as he assumed all stars were the same color. It took further refinement to conclude that a spectral analysis could compute the shift of light colors to more accurately reveal motion. To the lay public, Doppler's discovery is better known from its application to sound waves. The pitch is changed by expansion or contraction of sound waves. We all best know this phenomenon from the sound made by passing trains, which dips lower once the train passes. Priced at €13,000 (euros, or approximately $13,728 in U.S. currency).

When travelers set out on long voyages of discovery, it was relatively easy for them to determine their latitude. Just look at the angle of the sun, check out your calendar, and voila, you could determine how far north or south you were. Longitude, on the other hand, was an entirely different matter. Knowing the time of day, which could also be determined by the sun, was needed, but it had to be compared to the time of day at a fixed point, either your starting location or a universal longitude such as the Greenwich mean. If, for example, there was a one hour difference, you knew you had traveled 1/24th of the globe east-west. But, while you could compute the time where you were from the sun, travelers had no idea what the time was back home. That is where John Harrison came in. People didn't have watches in the 18th century, and the timepieces they had were not very accurate. He devised a chronometer that could be carried and operated on a ship while being extraordinarily accurate. Even weeks or months of travel later, it would still accurately maintain the time back home, allowing the traveler to make the comparison in time between home base and where they were at the moment, telling them just how far east or west they had traveled. Add that to their preexisting capacity to compute latitude and they could almost precisely determine where they were. Offered is a first French edition (title in French and English) of The Principles of Mr. Harrison’s Time-keeper, with plates of the same, published by order of the Commissioners of Longitude, by John Harrison and Nevil Maskelyne, published in 1767. €25,000 (US $26,347).

Albrecht Durer is still one of the most notable artist/illustrators ever, though he lived 500 years ago. His prints, and books containing them, are highly valued and sought after today. Less known is that Durer was also a mathematician, who used his formulas in his artwork. Specifically, he used geometry for both art and architecture. Late in his life, he wrote about it. This is a first German edition of Durer's Underweysung der messung, mit dem zirckel un(d) richtscheyt... published in 1525. In it, Durer teaches the principles of geometry as applied to painting and architecture, as well as the principles of perspective. The book contains two large woodcuts. €28,000 (US $29,573).

Here is a book in English, and one of the most important travel books of the 19th century. The title is The Lake Regions of Central Africa. A Rare Picture of Exploration, by Richard Burton, published in 1860. Burton was Britain's foremost explorer of the 19th century. Most of his travels were centered in the Middle East and Africa, though he also visited, and wrote about, his trip to Salt Lake. His other most notable work is an account of a trip he took to Mecca, at great peril for his life, dressed and convincingly adopting the appearance of an Afghan Muslim. Non-Muslims entering the holy city faced almost certain death. The journey recounted in the Lake Regions had a particular purpose beyond seeing some nice African lakes. Burton, and his partner, John Speke, were seeking the elusive source of the Nile. Despite the many attempts, no European yet knew where the source was located. It was a strenuous journey and both men became deathly ill. Burton reached Lake Tanganyika but could go no further. Half blinded, Speke pushed on. He came back and announced that Lake Victoria was the source. Burton was not convinced. Speke broke an understanding, at least in Burton's opinion, by repeating his story without Burton being present. It led to a bitter feud, which ended only the day before they were to debate when Speke shot himself, either the result of a terrible hunting accident or intentionally. But, Speke was right about the source. €5,900 (US $6,238).

While Speke died in 1864, Burton lived to 1890, affording him the opportunity for more adventures and to write more books. In the 1860's, Burton was named British consul to Fernando Po, a small island off the west African coast. It was an insignificant assignment and Burton hated it. He got away whenever he could. He hoped to capture a gorilla, and used one of his escapes to the continent to make the attempt he wrote about a decade later, published in 1876: Two Trips to Gorilla Land and the Cataracts of the Congo. It tells about the places he visited and the natives, at least as seen from a British perspective. However, he never captured a gorilla. This copy has a library stamp that provides an interesting history. It was once part of the Ambassador College Library in Pasadena, California. Americans who grew up in the 1950's and 1960's and listened to their AM radios late Sunday night will remember the golden voice of Garner Ted Armstrong, radio preacher broadcasting The World Tomorrow. Ambassador College was operated by the Worldwide Church of God, headed by Garner Ted's father for whom he worked. €6,500 (US $6,870).