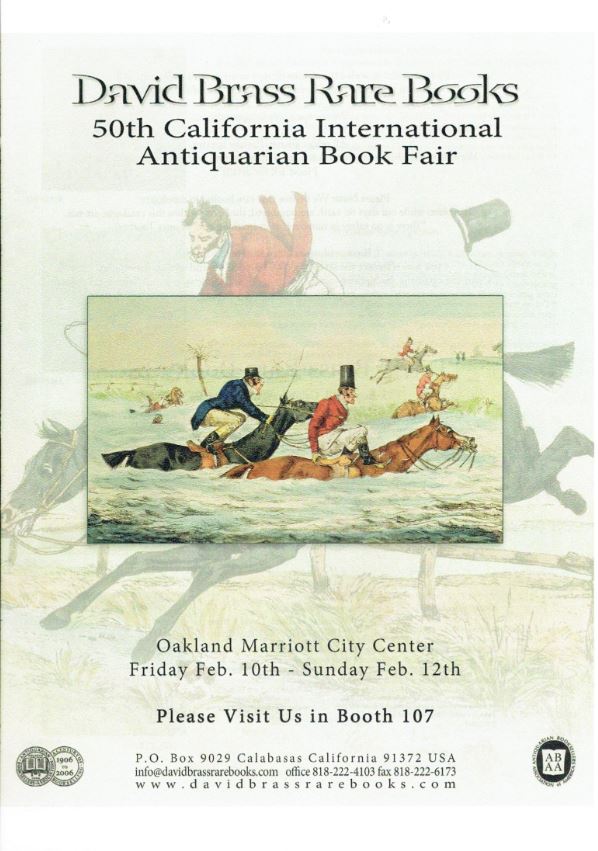 Fine books for a fine fair.

David Brass Rare Books printed a catalogue for the recent 50th California Antiquarian Book Fair. They focus on fine books in exceptionally good condition. While a variety is offered, most of the items are either classic works by notable authors, or books with some type of artistic bent. They may be filled with illustrations, often caricatures, or they may feature special bindings and the like. These are very nice books for people who like their books to look good, either before or after opening. Here are a few.

We begin with the item displayed on the cover of this catalogue. It is one of 36 hand-colored illustrations in Sporting Notions, by Henry Alken, published in 1831-33. Alken was a caricaturist, a very good one with a great sense of humor. His favorite topic was sporting events, and of those, ones involving horses were number one. Alken found great humor in humans riding horses, and the inevitable mishaps that occurred when horses were not cooperative with humans. Horseback activities being a favorite sport of the upper crust made his caricatures of the riders' foibles even more entertaining. It is especially fun to laugh at the misfortunes of the pompous. Several other Alken works are offered in this catalogue, though this is one of his finest and rarest books. Priced at $27,500.

Macmillan Publishers evidently knew they had a hit on their hands when they first saw Lewis Carroll's Alice's Adventures in Wonderland. They brought in the talented illustrator John Tenniel, and printed pages for 2,000 copies of the first edition. They had bound 48 copies when Tenniel said "hold the binding" or words to that effect (it was too late to say "hold the presses"). Tenniel was displeased with the quality of the reproduction of his illustrations, and Carroll, a real stickler for detail, shared his sentiments. They wanted the printed copies recalled and all of the pages for the remaining copies destroyed. That was a bit much for Macmillan with so much invested, so they reached a compromise. The inferior printed pages would be shipped off to America for an American edition. England would get superior, newly printed pages. The result is that this copy can be described as either the first American edition or the second issue of the first edition. Since only a few copies of the true first survived, it is the first obtainable edition. The one that was reprinted for the British public is a second edition. $32,500.

It was only fair that the first edition of Alice be published in England. Charles Lutwidge Dodgson (Lewis Carroll's actual name) was an Englishman. But Huckleberry Finn? Samuel Clemens (Mark Twain's actual name) was as American as steamboats and jumping frogs. But, here is a first American edition of the Adventures of Huckleberry Finn, and it has to be called a first American as a British edition preceded. And no, it wasn't because we sent inferior pages to England. It had to do with securing British copyrights before someone had a chance to steal Twain's work. This is a fine, essentially untouched copy. $16,500.

The passing of love poems for Valentine's Day dates back to the late 18th century. These were handwritten messages, rather than the prepackaged cards that made displaying one's affection less demanding in the 20th century. Still, the writing of affectionate or funny or unkind poems was a literary skill not everyone possessed. So, in the days before totally prepackaged Valentine cards appeared, there was an interim step, called the Valentine Writer. It was a book of pre-written Valentine poems a lover with limited literary skills could copy and send to his/her lady/gentleman. These books usually contained all sorts of Valentine poems, from the romantic to the humorous. Often, they included poems designed to be written by members of a particular trade, or to a person of a particular trade. The books also contained answers to various types of messages, so a recipient could respond, either affectionately, dismissively, or even cruelly. They had an answer for everyone. That brings us to The New London Fashionable Gentleman's Valentine Writer and Richardson's New Fashionable Valentine Writer; or, Cupid's Festival of Love. These two circa 1830's Valentine Writers come with an extra-inserted 24 hand-colored engraved plates labeled Collection of Mock Valentines. These were deliberately rude illustrations, depicting unpleasant people. The poems were equally cruel. They could be sent anonymously to people you did not like. Brass notes these mock Valentines provide "a wonderful opportunity to relish the rude, less attractive walks of life – fat ladies, people who won’t shut up, shrews, dandies, peeping toms, hen-peckers, conceited little barbers, knaves, brutes, bad singers, and more." Here's a lovely example from a plate showing a woman with an exceedingly long tongue:

Go to thy chosen friend, the devil-

For ever chattering scandle raking;

Slanders and lies and mischief making.

Thou detestable, friend of no man.

Such ugly mugs I'm sure as thine;

Will never gain a Valentine."

We conclude with a first edition of The Water-Babies... by Charles Kingsley, published in 1885. It is a children's story but with lots of messages for adults as well by this progressive English clergyman who was one of Darwin's first followers. This copy is noted for coming in one of the famed Cosway bindings. These were bindings which featured a miniature portrait inlaid in the cover. They were first created by J. H. Stonehouse of Sotheran's. The artist was Mrs. C. B. Currie. Mrs. Currie is known not only for her Cosway miniatures but as one of the greatest fore-edge painters. Surprisingly, for all her activity, next to nothing is known about Mrs. Currie personally. This copy comes with a certificate leaf signed by both Stonehouse and Currie. $9,500.