A Visit to the California Book Fair by Bernard Quaritch Ltd. 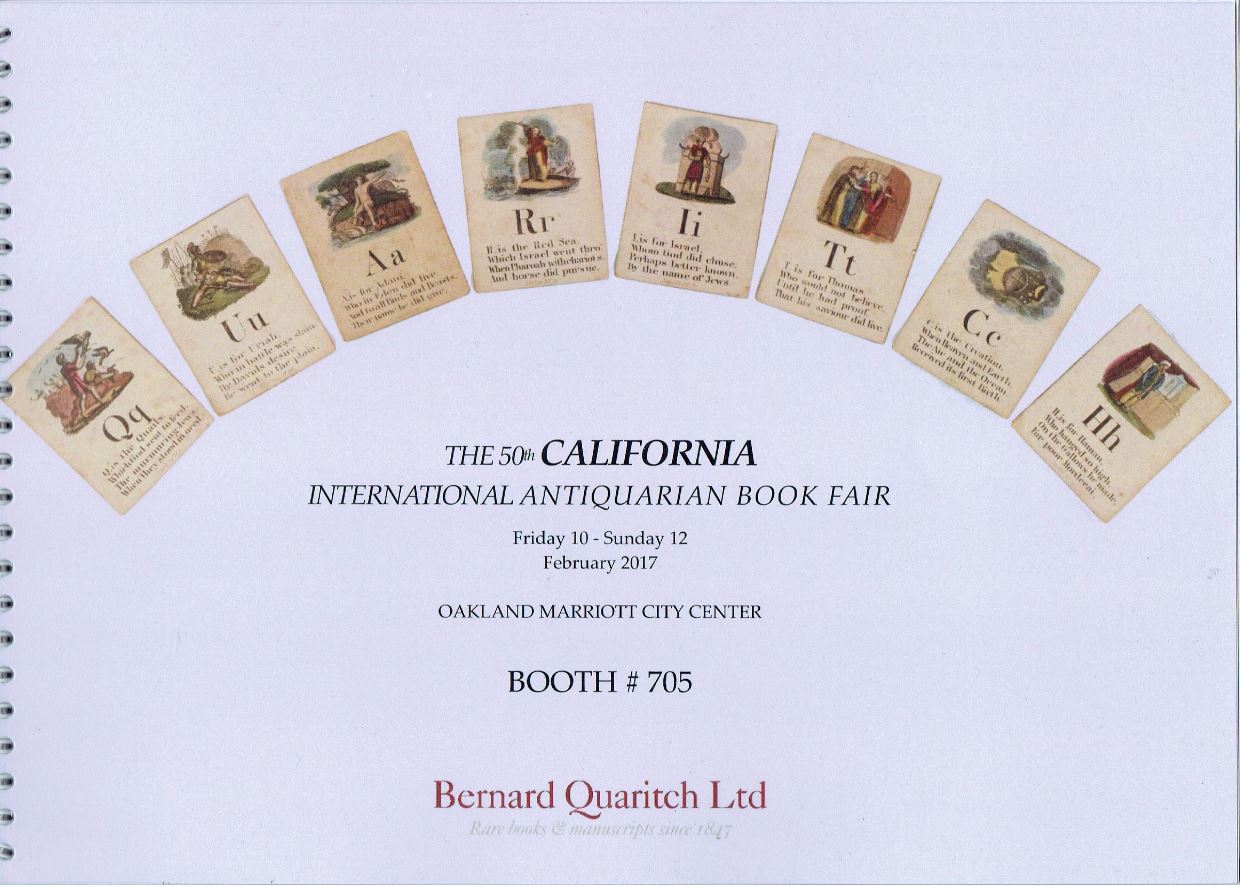 Bernard Quaritch Ltd. recently created a catalogue especially for The 50th California International Antiquarian Book Fair. Bernard Quaritch is the storied London bookseller that has been selling books longer than California has been a state. Bernard would have required a Mexican visa to enter California in his early days, presuming he didn't enter Mexico illegally. Mr. Quartich is long gone, and his family exited the business after over a century of operation, but the firm, and Bernard Quaritch's name, remain, a reminder of a long and illustrious history. Here are a few of the books that made the trip to the "New World."

We begin with easily the oldest item in this catalogue, and don't be scared off by the price. Most books herein are not in this price range. It's just that if you want a book from the 13th century, it is going to be very rare and valuable, the result of much effort as it all had to be written by hand. Item 4 is an anthology of writings, including religious, philosophical, and mathematical texts, with works by Alexander de Villa Dei, Al-Khwarizmi and others. The manuscript was likely a textbook of sorts, assembled for instruction at the University of Paris during the late 13th century. There is also some marginalia of a more recent vintage – the 14th century. Item 4. Priced at $105,000.

If philosophy, religion and math aren't your favorite topics, here is one you will undoubtedly prefer – Il Cioccolato. No need to translate that title. It is the work of Francesco Arisi of Cremona, published in 1736. It is a poem in praise of chocolate. He recommends the right mixture of chocolate with vanilla, sugar, cinnamon and other spices. By itself it is not very tasty. He does not approve of putting it in coffee or tea, or sniffing it like snuff. It is a drink that should be enjoyed by itself. Arisi took his chocolate seriously, recommending hanging for people who messed with it. I'm guessing that was tongue in cheek, but in the 18th century, who knows? Arisi was a founder of the literary society Accademia dei Disuniti in Cremona. Item 8. $2,500.

Here is an interesting piece of science by the Jesuit astronomer, Jacques Grandami. He was a studied man who corresponded with other scientists of the day, but in his Jesuit role, he was called on to defend the Church's banning the Copernican heliocentric system. Galileo adopted that system and found himself under house arrest as a consequence. The idea that the sun moving though the sky was just an illusion caused by a rotating earth was biblical heresy at this time. The Jesuits had done much work with magnetism, and Grandami used it to disprove that the earth rotated on its axis. Not really, of course, but he thought he did. Experiments with spherical magnets floating in water convinced him that magnetic spheres do not rotate. Applying this to the earth, which everyone knew by then was magnetic, he concluded that it could not rotate. Therefore, the globe was stationary, the sun actually revolved around the earth, and Galileo got what was coming to him. Grandami's book is titled Nova demonstratio immobilitatis terrae petita ex virtuta magnetica. It was published in 1645. This copy is inscribed by the author. Item 40. $15,000.

It has been called the worst natural disaster ever to hit Europe. An earthquake struck southern Italy on December 28, 1908, at a magnitude of 7.1. The cities of Messina and Reggio Calabria were practically leveled. Over 90% of the structures in Messina were either completely destroyed or damaged beyond repair. Estimates of the death toll were in excess of 100,000, 75,000 in Messina. Thousands were crushed under falling buildings, others trapped in the rubble. If this wasn't enough, a tsunami followed, three waves, which inundated many of the destroyed structures, crashed boats upon the shore, and drowned thousands of others, including many who fled to the beach to avoid collapsing buildings. Item 29 is Messina e Reggio e dopo il terremoto del 28 Decembre 1908, published by the Societa Fotografica Italiana in 1909. It records the destruction caused by the quake in over 500 photographs. Some show the cities prior to the earthquake for a chilling comparison. This is a presentation copy, given by the President of the Italian Photographic Society to King Victor Emmanuel III. Society President Luigi Castelani has marked the limitation statement in manuscript "copy n.1." The King visited the site two days after the earthquake to lend aid. Item 29. $1,500.

This is not specifically an earthquake item, though it is related to one. Item 87 is Old Chinatown: a book of pictures by Arnold Genthe with text by Will Irwin.. Genthe wandered the streets of San Francisco's Chinatown, apparently becoming something of a fixture as the subjects of his photographs appear unaware of his presence. Irwin writes that Genthe was "unconsciously, all that time, the sole recorder of old Chinatown." Genthe himself notes that "the Old Chinatown, the city we loved so well, is no more." The explanation for these comments is that Genthe's photographs predated 1906. That was the year of the San Francisco earthquake, that eradicated old Chinatown from the face of the earth. On a more positive note, Genthe adds, "A new City, cleaner, better, brighter, has risen in its place." Offered is a 1913 second edition, the first having been published in 1908. Item 87. $375.

Here is another photo book depicting a life gone by. Item 19 is The English at Home, by German photographer Bill Brandt. This is a first American edition, published in 1936. Brandt came to England shortly before the Second World War and traveled around the country, photographing cities and countryside, rich and poor, whatever he found. Often, what is noticeable are the contrasts. In the introduction, Raymond Mortimer notes, "He seems to have wandered about England with the detached curiosity of a man investigating the customs of some remote and unfamiliar tribe." $700.