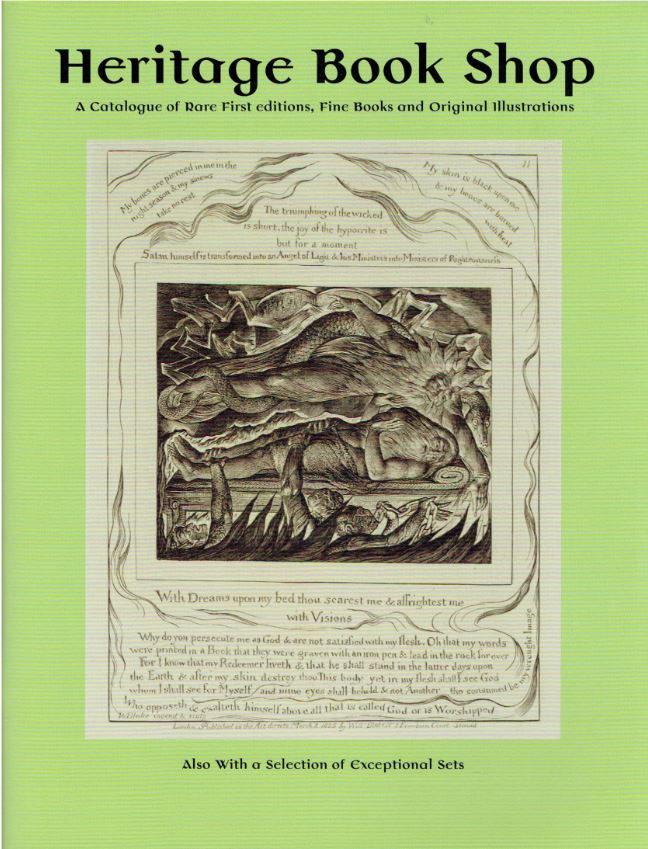 The Heritage Book Shop has prepared A Catalogue of Rare First Editions, Fine Books and Original Illustrations. Heritage is a venerable Southern California bookselling institution, over 50 years in business, now in Tarzana, still with original ownership. Heritage specializes in important books in excellent condition. Subjects and styles vary widely, meaning the books will appeal to all sorts of people who collect at high levels. These are a few selections being offered.

We begin with the masterpiece of this catalogue, likely out of your price range, but worth the time anyway. It is Le Recueil des Histoires de Troyes (collection on the history of Troy), by Raoul Lefevre, published by William Caxton in 1473. Wait a minute! Everyone knows Caxton was Britain's first printer, but his first book was not published until 1476. That is almost, but not quite correct. Caxton was born and raised in England, though little is known of his youth. He was an apprentice for a London merchant in the 1440's. However, he moved to Bruges, in what is today Belgium, in 1453. He was a trader by then, and his business required much travel. During travels to Cologne, Caxton became interested in the new printing industry. He saw an opportunity. Back in Bruges, he set up a printing press, with this book being one of his Bruges publications. It is generally considered the first literary work in French. Its translation to English would be the first book printed in the English language, though it came from Bruges, not London. He moved back to London in 1476 where he became England's first printer. This copy is missing a few pages, but is better than some of the seven extant copies, only three of which are complete. Its provenance includes the collections of the Duke of Roxburghe and J. Pierpont Morgan. Good company. Item 66. Priced at $950,000.

What could be more appropriate for a Tarzana bookseller than the book for which that city was named? Item 20 is the first in a series, Tarzan of the Apes. Edgar Rice Burroughs' tale of the English noble child, raised by apes in the wilds of Africa, was published in 1914. This is the first hardback edition of the original Tarzan story that earlier had appeared in a magazine. It led to a series of books, comics, films and merchandise. As to why so many people connected to this unlikely fictional hero, Viscount Greystoke aka Tarzan of the Apes, I'm not sure, but they did and still do. By the way, Tarzana was once the sight of Burroughs personal ranch, which he named after the character that provided him with the means with which to buy that ranch. Item 20. $4,500.

Item 25 comes from George Catlin, whose travels to Indian country in the 1830's were captured in his illustrations and text. This is an account of O-Kee-Pa: A Religious Ceremony; And Other Customs of the Mandan, published in 1867. This book has a history. Two years earlier, a pirated version of Catlin's account was published, including a mangled description of the gruesome and sexually explicit buffalo dance not suitable for delicate ears. Catlin demanded the book be withdrawn, and then published this account, leaving out details of the dance. However, in a small run (supposedly 25 copies), he added a Folium Reservatum, which is included with this copy. It describes the dance in all its glory, including sexual pantomimes and what Laird Park described as "barbaric torture" some of the participants were put through. It was not pleasant by our standards. The preface contains a letter from Prince Maximilian, who also visited Indian country and wrote about it in the 1830's. The Prince attests to the accuracy of Catlin's account though he did not personally witness it. The Mandans trusted Catlin especially as they were impressed by his drawings. Catlin's capturing the tribe's history is essential for that history's survival as five years later, the Mandans were practically wiped out by smallpox. $25,000.

Here is another book with its own story, a sad one: Black Beauty: His Grooms and Companions. The Autobiography of a Horse. Translated from the Original Equine by Anna Sewell. Actually, Black Beauty was not the original Mr. Ed. Sewell wrote this book, regardless of what its title says. Anna Sewell had a tragic life. She was injured in an accident in her teens, and could hardly walk the rest of her life. This handicap led to her taking many carriage rides. She became very fond of horses, and equally displeased with the poor treatment many received. Her book was not so much meant to be a classic to be loved by generations of girls but to serve as a call for more humane treatment of the animals. By the time she reached the age of 50, Sewell was essentially bedridden, cared for by her mother. It was then she began work on her first and only book. She dictated parts to her mother, in some cases was able to write a little with a pencil on slips of paper. The book was finally finished and published seven years later, in 1877. Anna Sewell only lived a few more months, but long enough to see her book was quickly becoming popular. Item 95. $4,500.

Here is an early look at film history: A Million and One Nights. A History of the Motion Picture, by Terry Ramsaye. It has to be an early history as it was published in 1926. It was limited to 327 copies, this being one of a handful bound in pigskin. Ramsaye was both a journalist and a movie producer, so he was an ideal person to write such a book. It particularly focuses on the work of Thomas Edison and his studio. Though better known for electricity and the light bulb, Edison was involved in early movies, including the kinetograph, a one viewer at-a-time peephole device that did not project the film, but still used the process of quickly moving slides to create an illusion of motion. The book contains a preface by Thomas Edison praising the book and this copy has been signed by Edison. Item 35. $4,850.