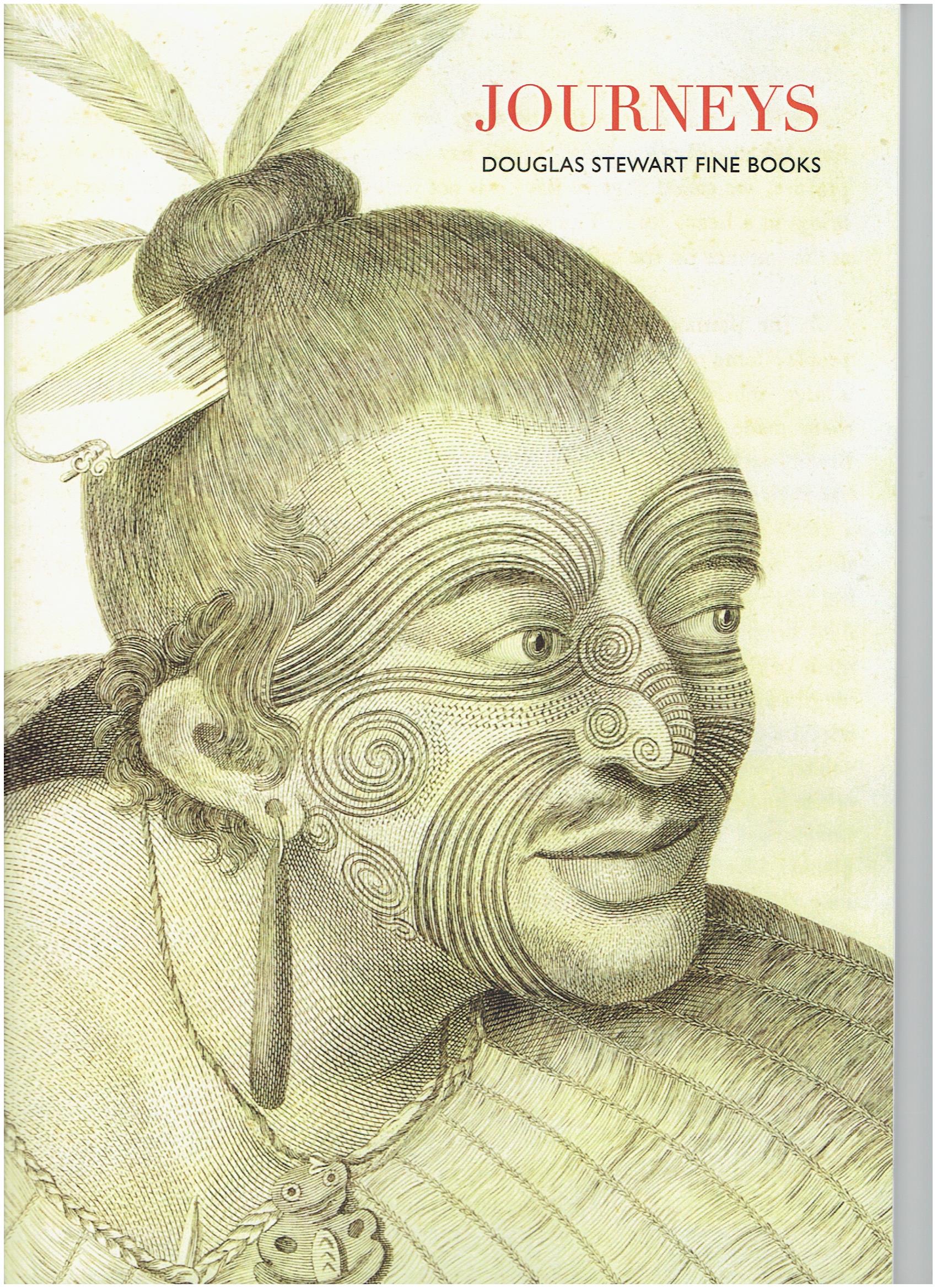 Douglas Stewart Fine Books has issued a catalogue entitled Journeys. Stewart is a Melbourne, Australia, bookseller, but the continent's isolation is not reflective of the books they offer. The journeys described cover the entire world. They are broken down by destination: American, Asian, Antarctic, Pacific, and World. Only a small portion pertain directly to Australia. The catalogue was prepared for the California International Book Fair, perhaps explaining its international focus. The prices listed are in American dollars, in recognition of the fair's host. Here are a few of the travels covered in this catalogue.

For those interested in printing history, here is an item you don't find everyday. It is an example of printing prior to Gutenberg. Say what? Wasn't Gutenberg the first? He was first when it comes to using movable type. However, there was printing from blocks in China centuries earlier. Here is one such block, a stone printing block from China, circa 1287. This was the time when Marco Polo visited China, during which he described its paper currency. The text for the currency on the block provides a notice that counterfeiters will be punished by decapitation. A person identifying a counterfeiter would get a sizable reward along with the criminal's property. Despite the dire consequences, the warning may not have been that effective. Stewart points out that this block was carved in stone, rather than bronze as normal. That is an indication that it may have been created by a forger to produce counterfeit notes, though another explanation, such as an artisan's model, is possible. Item 42. Price on Request..

Item 43 is an example of one of these pre-Gutenberg printings of Chinese currency. It is a 1 kuan paper note, circa 1375. It depicts ten piles of 100 copper coins each to illustrate its value. It also contains the warnings against counterfeiting and the rewards to squealers, the quotation that it is "to circulate forever," and the seals of the Office of the Superintendent of the Treasury and the Great Ming Dynasty. By the following century, inflation caused by overprinting of banknotes, led to the discontinuation of their circulation, with silver coins their replacement. $15,000.

Item 7 is the first part of Comentarios Reales, que tratan del Origen de los Yncas, by Garcilaso de la Vega ("El Inca"), published in 1609. It is an account of Inca life in Peru, the culture, politics, and economics of an empire that quickly disappeared after the arrival of the Spanish. De la Vega had a unique perspective on Inca culture as well as access to their oral history. His father, of the same name (hence the author being distinguished as "the Inca"), was a Spanish conquistador. His mother was from Inca royalty. He learned about Inca culture from his mother's family. De la Vega went to Spain to further his education at the age of 21 and never returned to Peru. However, he had his memories to provide insights others lacked. De la Vega later wrote a second volume covering the conquest and early colonial period. $9,500.

Americans are pretty keen on body art these days, but I don't know whether they are even close to matching the artwork of Pacific islanders from centuries ago. The picture on the cover of this catalogue is an example. It is one of the drawings by Sydney Parkinson, the artist taken along on Capt. James Cook's first expedition to the Pacific. Parkinson produced over 1,300 drawings and sketches on his journey, including the first of natives of Australia and New Zealand from direct observation. Unfortunately, Parkinson never made it home, dying from dysentery in Batavia (today's Jakarta). His drawings did, and in 1773 they were published by his brother, Stanfield Parkinson, in A Journal of a Voyage to the South Seas, in His Majesty's Ship the Endeavor. Faithfully Transcribed from the Papers of the Late Sydney Parkinson... It was unauthorized and an injunction placed on its publication until after the official account was released. Item 87. $12,500.

Item 75 is a three-volume set of facsimiles of a newspaper. Facsimiles of a newspaper may not sound exciting at first, but this was a very unusual paper, not one you could buy at a newsstand or find in a library. It was the South Polar Times, originally published in 1902-1903. There aren't many newsstands or libraries in Antarctica. It was written and published by the crew of the British National Antarctic Expedition. It was edited by Ernest Shackleton, who would later command major Antarctic expeditions, but on this one was serving under Robert Falcon Scott. The explorers would make it farther south than anyone had before, though they did not reach the Pole. Of course, there's lots of downtime on board a ship in the Antarctic – nights that go on for months and biting cold that limits outdoor activities. Crewmen on the expedition, including Apsley Cherry-Garrard, who later participated in "the worst journey in the world" with Scott, wrote literary articles and provided illustrations. The three volumes were published from 1907-1914, the first two volumes in 250 copies, the third in 350. This copy comes with the very rare subscribers' broadside. $25,000.

This next book provides an account of explorations in America and Asia, or specifically, in the area where those two continents almost come together. Item 40 is an Account of the Russian Discoveries between Asia and America. To which are added the Conquest of Siberia, and the History of the Transactions and Commerce between Russia and China. The author was William Coxe, an English clergyman and historian who traveled around Europe, spending much time in St. Petersburg, where he conducted research into Russian Pacific explorations. He writes about the voyages of numerous explorers whose names are better known in Russia, and then moves on to expeditions in Siberia and China trade. Of particular interest to Americana collectors are sections about contacts made between the Russians and Alaska and the Aleutian Islands. $6,000.