Americana, the West, Literature, & Much More from Back of Beyond Books 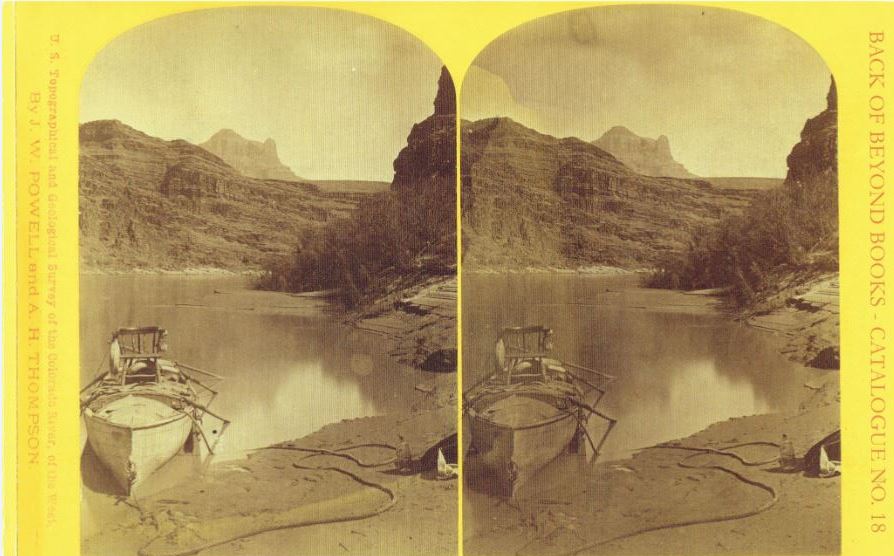 The Southwest and much more.

Back of Beyond Books has released their Rare Book Catalogue No. 18. I believe it must be their most extensive collection yet, 360 items of varied interest. Back of Beyond is a specialist in material related to the American Southwest, their home, and there are many items here pertaining to that specialty. However, there are many other fields represented, not all of which we normally find in their catalogues. Other subjects include the broader Western Americana, Mormons, Native Americana, Americana in general, literature, Wallace Stegner, Mountaineering, Pocket Maps, Sheet Music, and Miscellaneous, to cover everything else. This is definitely a something-for-everyone catalogue. You will find fascinating books and ephemeral writings no matter what your taste. Here are a few samples.

We will begin with a classic Southwest discovery item. John Wesley Powell led the first expedition to ride the Colorado River rapids all the way to the Grand Canyon. Powell headed two expeditions along the Green and Colorado Rivers, issuing his official report in 1875. He then had another 20 years to think about it, and in 1895, wrote a more detailed account. This second one is titled Canyons of the Colorado, privately printed in Meadville, Pennsylvania, in a small run in 1895. A large section of the Colorado River Powell first explored was dammed up half a century ago to create a giant reservoir – Lake Powell. Item 25. Priced at $9,750.

So, what made Powell do the things he did? Edward A. Spitzka wished to find out, which explains this bizarre archive of early 20th century material. Spitzka was a brain anatomist who somehow convinced Powell to leave him his brain for study. In those days, it was believed that studying the features of physical brains could reveal why the people they inhabited behaved as they did. Everything from presidential assassins to Einstein had their brains examined after they died (some should have had them examined before). This archive contains nine pencil drawings of Powell's brain, letters from prominent people who knew Powell describing his traits or specific anecdotes, typed and manuscript copies of Dr. Spitzka's report, two copies of the offprint of his article, and other material that will help you better understand John Wesley Powell's brain. Item 28. $4,500.

Western Monthly Magazine began publishing in 1833, a successor to The Illinois Monthly Magazine, the first literary journal in that then frontier state. The publisher was James Hall, who moved to Illinois in 1820 and worked as a lawyer, publisher, and writer. At some point he moved to Cincinnati, explaining the magazine's name change. The Western Monthly Magazine was published from 1833-1837. If Hall's name is familiar, he was the same James Hall who is known for one of the greatest early books about America's natives, the three-volume 1836-1844 set he wrote with Thomas McKenney, illustrated by Charles Bird King, History of the Indian Tribes of North America. A first edition of that will cost you a pretty penny (copies have sold for over $100,000). You don't have to be so rich to buy the magazine. Back of Beyond is offered bound copies of the first three volumes of Western Monthly Magazine, covering the years 1833-1835. Of particular note is it contains the first piece of fiction written by Harriet Beecher Stowe, Isabelle and Her Sister Kate, and Their Cousin (we don't know whether Isabelle could shimmy like her sister Kate). Miss Beecher moved to Cincinnati in 1832 to be with her father, President of the Lane Theological Seminary. She joined the Semi-Colon Club, of which Hall was also a member. So was Salmon Chase, future Governor and Lincoln cabinet secretary, and one Calvin Ellis Stowe, who would become her husband. Item 224. $300.

Item 274 is American's Dream; Or, the Partial Downfall of Liberty, and its Ultimate Triumph over Tyranny, by "Thomas Theseer." It was published in 1861, at the outbreak of the Civil War, and you might assume the attack on liberty was slavery, or from a southern point of view, abolition. No, in 1861, if Mr. Theseer is to be believed, the real threat was Catholics. In his world, Catholics were paying off politicians to get their way. The cover features an image of a fearsome four-headed dragon, the faces being the Pope, Archbishop Hughes of New York, Secretary of State William Seward, and newspaper publisher/politician Thurlow Weed. The piece is an anachronism. In the mid-1850's, the Know-Nothing Party sprung practically out of nowhere with its virulently anti-Catholic, anti-immigrant platform. They made a serious run at the presidency in 1856, with a former President, Millard Fillmore, carrying their banner. However, the impending doom surrounding the practical inevitability of civil war quickly erased their particular agenda from the forefront of public consciousness. No one was worrying that much about the Pope in 1861 as their sons were being carted off to die in distant fields; nobody, that is, but Mr. "Theseer." $750.

Are you suffering from, well.... anything? Dr. Williams' Pink Pills for Pale People will cure it. Headaches, "female problems," paralysis, anemia, rickets, rheumatism, pimples, kidney disease, hysteria, "change of life," even tuberculosis. It contained some iron so the medicine may have been somewhat helpful in relieving anemia, or palesness. Quoting Mary Kilcline Cody from her article A Paler Shade of White, "Europeans could always rely on the Pink Pills to alleviate the pressures of bearing the white man's burden." As for the rest of the illnesses, good luck. By the way, we can thank Canada for producing this example of medical quackery. Item 322 is a 32-page pamphlet explaining the pills' miraculous cures, circa 1898. $50.

Here is an interesting product about which I can find virtually nothing. It is an unillustrated poster, promoting, in concise language, Wild Bill Hickok's Sober Gum. The entire explanation says it "will straighten you up and kill all trace of alcohol on the breath / Fine for morning after / Try it now / Guaranteed." Why don't they make this stuff any more? Is there no longer a need? It sounds like Wild Bill was onto something. However, it is dubious he was promoting this very useful product or receiving his deserved royalties. The undated poster notes that it was printed by the Allied Printing Trades Council of St. Louis, a union organization. The council was formed in 1893. Wild Bill died in 1876. Item 226. $250.