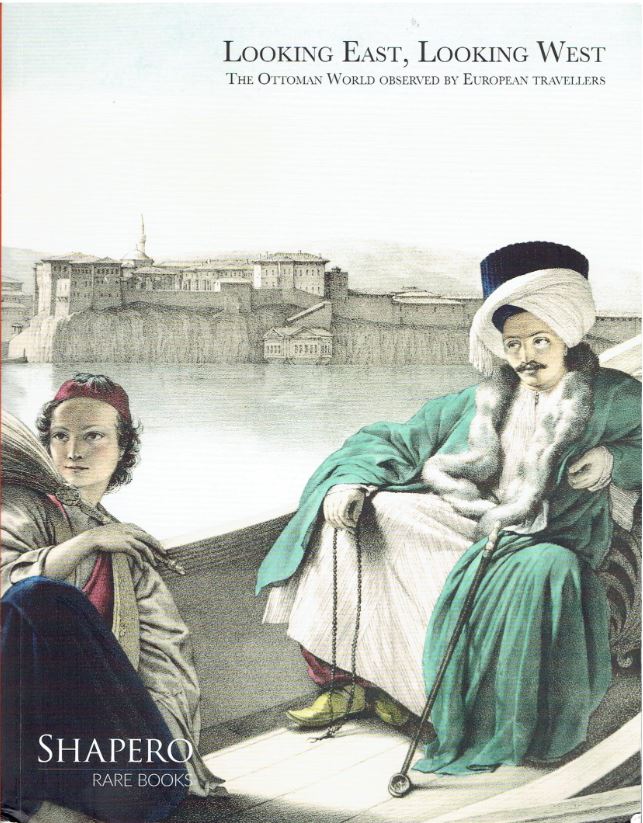 The latest catalogue from Shapero Rare Books is entitled Looking East, Looking West, the Ottoman World Observed by European Travellers. They would have mostly been looking east when they set out on their travels. The Ottoman world was headquartered in today's Turkey, though it spread through the Middle East, Egypt, and reaching into southern Russia and eastern Europe. At one time it covered all of North Africa, farther into Europe, and western Asia, but these works primarily cover the 18th and 19th century, when it had retreated a bit. It is a place that fascinated Europeans, with its ancient history, biblical connections, magnificent architecture, and very different culture. The books contained in this catalogue display the land's beauty and majesty, which is to say, they are filled with illustrations, often quite spectacular. Here are a few samples.

We begin with the most famous of western journeys into the center of the Islamic world – Mecca – back when the holy city was still within the Ottoman Empire. Richard Burton was an Englishman noted for his travels, primarily in the Middle East and Africa. He was exceptional at learning local customs and culture, and writing detailed accounts of what he saw. However, Mecca was off limits to anyone but Muslims, which he was not. Death was the likely outcome for any outsiders who attempted to sneak in. The result was that Burton had to disguise himself, which required not just wearing the clothes, but learning the language, customs, and faith of an Afghan Muslim, and to speak and know it so well that no one would be the wiser. In 1853, Burton made the journey, first spending a month in Medina, and then on to Mecca. Somehow, he managed to pull it all off without being discovered, and after he returned home, wrote this book: Personal Narrative of a Pilgrimage to El-Medinah and Meccah. His book was published in 1855-56. Item 26. Priced at £6,750 (British pounds, or approximately $8,417 U.S. dollars).

Heinrich Schliemann was a German businessman and amateur archaeologist, who made a fortune during the California Gold Rush (as a banker in Sacramento), and some more in Russia. It enabled him to devote his later years to his passion, searching for archaeological evidence to back his belief that ancient Greek stories were based on historical facts. Schliemann discovered the site of ancient Troy, and conducted some of the first major excavations of antiquarian Greek cities. He is not seen without controversy today since his digs were crude by current standards, damaging some discoveries, and not keeping track of layers so as to identify time periods accurately. Still, this was the dawn of such digging and it's not really fair to hold Schliemann to later standards. He excavated Troy in 1873, and here is his first account of his findings to the world, the English edition (1875) translated from the original German: Troy and Its Remains; a Narrative of Researches and Discoveries Made of the Site of Ilium, and in the Trojan Plain. Item 84. £485 (US $604).

Schliemann would follow up with a more extensive account of his discoveries in 1880 in this book: Ilios: the City and the Country of the Trojans. It includes not only his findings from the first trip, but discoveries of his second excavations in 1878-1879. Schliemann includes contributions from eleven other specialists and extensive illustrations, as he attempted to establish the importance of his findings and be taken more seriously by scholars and historians. Item 83. £1,250 (US $1,557).

Howard Carter was another archaeologist, but his specialty was tombs, Egyptian ones in particular. He was involved in explorations in the Valley of Kings as a young man, and by the turn of the twentieth century was Chief Inspector for the Egyptian Antiquities Service. He lost his job in 1905 when he was blamed for a scuffle between French tourists and Egyptian guards, but in 1909, he was hired by Lord Carnarvon to conduct further excavations. Carnarvon was an amateur Egyptologist with a lot of money to spend on explorations. Carter worked for him for many years, but by 1922, his discoveries were not as much as his boss was hoping to see. Carter talked Carnarvon into financing one more expedition, and this would be the one that struck gold. Carter discovered the tomb of Tutankhamun, the only pyramid tomb unspoiled by grave robbers over the ages. Tutankhamun, the "boy king," took the throne at the age of 9 and died at the age of 19, his grave filled with all sorts of relics. Carter reported his findings to a fascinated world in The Tomb of Tut-Ankh-Amen Discovered by the late Earl of Carnarvon and Howard Carter. It comes in three volumes, published in 1923, 1927, and 1933. The first volume was mostly written by Carter's assistant, A. C. Mace. Item 29. £2,750 (US $3,428).

It was the greatest engineering feat of its day. This book marks the opening of the Suez Canal, Inauguration du Canal de Suez, by Gustave Nicole, published in 1869. Designed by Ferdinand de Lesseps, the canal is 102 miles long, but it saves over 4,000 miles of ocean travel necessary to sail around the African continent. The opening ceremonies attracted dignitaries from around the world. Hosting the inauguration was Isma'il Pasha, the Khedive of Egypt, the Ottoman ruler of that portion of the empire. Five hundred copies of this book were printed, with 200 withheld for the Khedive. This is one of those copies reserved for him. There are some sections missing from the Khedive's copy, such as the preface giving credit to de Lesseps and de Lesseps' portrait. It appears the Khedive preferred the emphasis to be on his own contributions. Item 66. £12,500 (US $15,584).