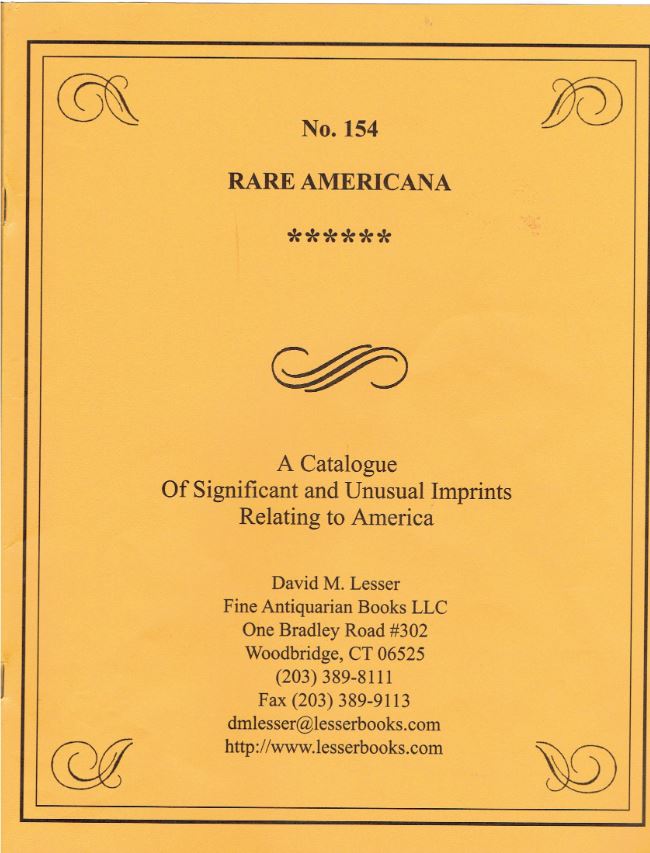 David M. Lesser Fine Antiquarian Books has issued their latest catalogue. The title is Rare Americana. A Catalogue of Significant and Unusual Imprints Relating to America. Actually, that's the title of every Lesser catalogue. Fortunately it also has a number, Catalogue 154, to distinguish one from another. But, David Lesser is a specialist in rare Americana, usually pamphlets, broadsides, and manuscripts, with a few full-size books in the mix. No wonder the same title makes sense for each issue. However, the material inside always changes. Here are a few selections from this latest collection.

We start with a significant piece for any collection focused on women's rights. Item 76 is Woman's Right to Preach the Gospel, by Rev. Luther Lee. It is not so much Lee or his speech that is notable, but the circumstances. It was preached on September 15, 1853, and the occasion was the first ordination of a woman minister in any mainstream American church. The ordination was that of Rev. Antoinette L. Brown, who would lead the Congregational Church in South Butler, New York. Not terribly surprising, Miss Brown was a strong advocate of women's rights, along with abolition, temperance, and such. She was allowed to receive an education in theology at Oberlin College, though they would not give her an official degree qualifying her for the ministry. She would begin speaking for women's rights and in 1850, attended the first National Women's Rights Convention, along with her future sister-in-law, the better known Lucy Stone. However, she dropped her speaking tours when given the chance, with the assistance of Rev. Lee, to become an ordained minister. Unfortunately, it was difficult for a woman to make much of a go of it in the ministerial profession in 1853, so within a few years, she was back to preaching women's rights instead, got married and had seven children, and later turned to writing rather than speaking. Her views weren't entirely aligned with the suffrage movement, explaining why she is not as well known, though she continued to devote much of her time to advocacy of the cause. Antoinette Brown Blackwell (her married name) lived to see the passage of the voting rights amendment in 1920. She was 95 years old and the only participant in the 1850 convention to live to see that accomplishment. Priced at $1,250.

Item 2 is a long and remarkable letter from Georgia Congressman Warren Akin from July 2, 1864, to Confederate President Jefferson Davis. Union General Sherman's March to the Sea was still a couple of months off, but Akin could see it coming. He also could foresee the result, and it was a dark picture for the Confederacy. He warns Davis that Gen. Joseph Johnston has virtually no chance of repelling Sherman, that the latter will roll into Atlanta, and despite the Confederacy's best attempts to defend the city, it will inevitably fall. He also warns that if this happens, the public will blame Davis, not Johnston, because the people will realize his position was hopeless, that Davis did not give him sufficient support. The part about no one blaming Johnston was not entirely true, but the rest was. Akin did have a plan to avoid this otherwise inevitable fate. That was to transfer troops from elsewhere to assist in Atlanta's defense. He suggests moving troops from Mississippi, saying it would be better to let Mississippi fall than Atlanta. Perhaps his being from Georgia colored Akin's opinion on what to defend. Akin concludes with a bit of a psychological ploy. He tells Davis people believe he has it in for Gen. Johnston, and that his failure to support Johnston would be interpreted as motivated by Davis' wishing to deny Johnston a victory, even at the Confederacy's expense. Ouch. $2,500.

Samuel Stanhope Smith was an accomplished and interesting man, a Presbyterian minister, college professor, later President of Princeton University. He combined both traditional and more enlightened ideas. In 1787, he published this book, Essay on the Causes of Variety of Complexion and Figure in the Human Species. It is focused on the African race, primarily slaves in America, but in it you can almost see some precursors to Darwin. Smith saw differences in pigmentation among field slaves and domestic ones as part of progressive minor changes within beings, a form of evolution. However, rather than seeing it as a result of natural selection, he thought it was the result of an interaction with their environment. And in this case it probably was, either domestics being out in the sun less, or greater forced interaction of indoor slave women and their masters resulting in lighter skinned children. Item 117. $1,500.

One might say Abraham Lincoln talked his way into the presidency. He was an eloquent speaker, whose fame quickly spread after the Lincoln-Douglas debates. Two years later, he was elected president. Item 80 is a Speech of Hon. Abraham Lincoln, Delivered in Springfield, Saturday Evening, July 17, 1858. That was about a month before the first of the Lincoln-Douglas debates. In this, Lincoln repeated his recent "House Divided" warning, that the nation would one day be either all free or all slave, but could not forever be half and half. He urged stopping its spread to new states, putting it on a course toward its ultimate extinction. Douglas, a proponent of letting each state decide for itself, was clearly a target of this claim. Lincoln also stated that while blacks are not equal to whites "in all respects," the principles of the Declaration of Independence do declare that they have equal rights to "life, liberty, and the pursuit of happiness," and "the right to put into his mouth the bread that his own hands have earned." This copy was signed by Robert Todd Lincoln Beckwith, Lincoln's last surviving direct descendant. Beckwith, Lincoln's great-grandson, died in 1985. $4,000.

Here is a bizarre broadside from Southington, Connecticut, from 1834. It is headed, Awful Tribunal. Never Before Has It Fallen to Our Lot to Picture to Our Fellow-Men the Decisions of His Satanic Majesty... The author is identified as "Young Nick," and the action takes place in the High Court of Vengeance, presided over by His Satanic Majesty. The participants include Sweet Romeo, Great High Priest, Little Wheel George, and Big Bug Merchant. The court is held in the basement of the Southington Presbyterian Church. Little Wheel George is sentenced to row in a nearby canal with an apple tree, Sweet Romeo to be "steeped down in phosphorous 86 years, and at the expiration of that time, you be devoured alive by fleas, if they will eat you." One must presume this is a satire and that the characters represent real people, but what the events being satirized were, or who was the author, and was he clever or crazy, is probably lost to history. Its meaning is unknown. Item 100. $500.