Italy and the Grand Tour from Yesterday's Muse Books 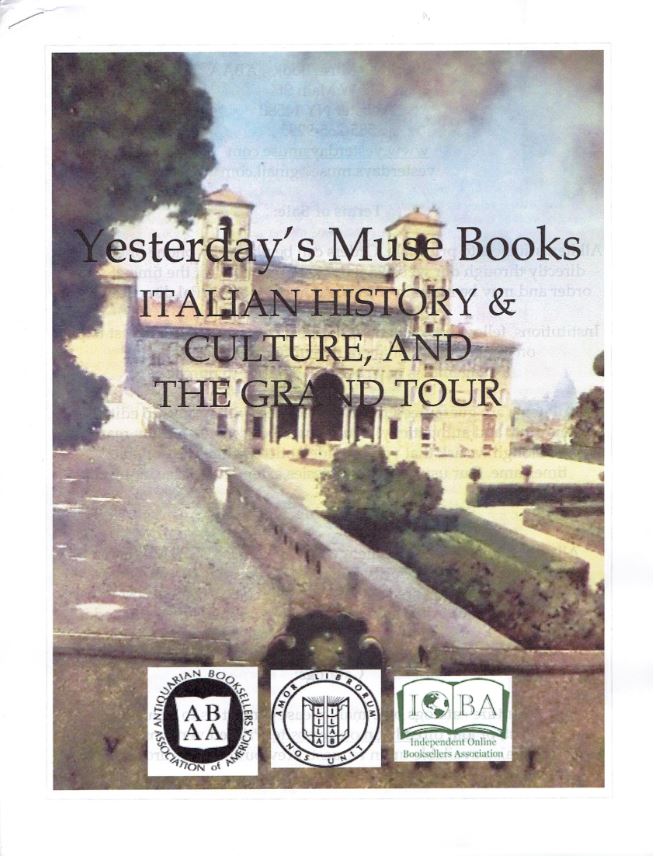 Italy and the Grand Tour.

Yesterday's Muse Books has published a catalogue of Italian History & Culture, and the Grand Tour. Fortunately for this reviewer, the majority of the items are in English, though they pertain in some way to Italy. There is a range of dates, some books being very old, some recent, and a few later printings of earlier material. And then, there is the Grand Tour. The Grand Tour refers to trips English and European young men of means would take. It was a phenomenon from the 17th until the 19th century, when rail travel made the tour a much less strenuous undertaking. Here are a few items from this catalogue.

We begin with a somewhat dated look at the area around Milan (1814). Item 8 is a fourth edition of Viaggio da Milano ai tre laghi Maggiore, di lugano e di Como e ne' monti che li circondanoi (journey from Milan to three lakes...). The author was Carlo Amoretti, who could justly be called a polymath. He began by studying theology and joining an order, but that didn't work out so well. It is why he moved from Parma to Milan. Amoretti became a scientist and translator of others' works. He studied geography and history, and wrote the first modern biography of da Vinci. Most notably, he discovered a manuscript in the Ambrosian Library of Antonio Pigafetta's journal of Ferdinand Magellan's voyage around the world. Magellan accomplished the first circumnavigation, but not really. He, along with all but 18 of his men, died before they got home, but Pigafetta was one of the survivors. The manuscript Amoretti discovered is believed to be the oldest extant copy of Pigafetta's journal. Amoretti's book about Milan was originally published in 1794, and was quite popular as several more printings followed. Priced at $225.

In the 19th century, medicine still being quite primitive by current standards, a common belief was that various waters contained curative properties. When you didn't know what else to do to cure your ills, you went to some springs that others claimed would heal you. Item 26 is Hints for Invalids About to Visit Naples; Being a Sketch of the Medical Topography of that City, published in 1841. The author was not some quack but a respected British physician, Joseph C. Cox. This is a guide for the sick who went to Naples to cure their ailments in the city's mineral waters. Item 26. $250.

John Bell was a Scottish physician who too made the pilgrimage to Italy for his health, though his ailment was not typical. Bell fell off a horse. However, his book is not a guide for the sick but a travelogue. He recounts his Observations on Italy, describing his journey to Milan, Florence, Rome and Naples in 1817 and 1818. We can guess that he liked Italy, but that it did not cure his infirmities as he died in Rome in 1820. Offered is a first American edition from 1826. Item 10. $100.

The concept of the Grand Tour can be traced back to Thomas Coryat, and yet his contemporaries saw him as more of a fool than a trailblazer. Coryat was a minor official in England's court, in his mind a wit, in others' a jester, when he undertook a European tour in 1608. That hardly sounds trailblazing today, but in Coryat's day, people didn't travel for leisure. They might go for business or diplomatic reasons, but pure tourism was unheard of. When he returned, Coryat wrote this book: Coryat's Crudities: Hastily Gobled Up in Five Moneths Travells in France, Savoy, Italy... Coryat was able to gather commentaries from numerous of his literary contemporaries for his book, but most were subtle, sometimes not so subtle, ridicule of him. Evidently, Coryat was a bit pompous and never realized what they were doing. Nevertheless, Coryat's Grand Tour would become a rite of passage for later generations of British and European young men of means. Coryat's book was originally published in 1611. This edition comes from 1905 but was only the fifth, a facsimile which also contains some later travels not found in previous ones. Item 25. $350.

By the 20th century, we were no longer referring to these tourist excursions as Grand Tours, but some of these early in the century would have had their own types of challenges. These are the early automobile trips, and cars and roads were not then what they are today. Item 59 is Seeing Europe by Automobile: A Five-Thousand-Mile Motor Trip Through France, Switzerland, Germany, and Italy... by Lee Meriwether, published in 1911. Meriwether had taken a trip to Europe as a young man 25 years earlier, and decided to recreate that journey in an automobile. His account includes numerous photographs, generally of architectural scenes, but you also get to see some neat old cars in the process. His knowledge of Europe from his trips undoubtedly helped him receive an appointment as a special assistant to the Ambassador to France during the First World War. Born on Christmas day in 1862 in Mississippi, he lived to be 103 years old. Though too young to have much remembered the Civil War, he was nonetheless an unreconstructed Confederate, and published some of his speeches, including a worshipful tribute to Jefferson Davis, and at the age of 96, a call for the preservation of the white race. His travelogues were better. Item 59. $175.

Perhaps Meriwether ran into Paul George Konody when he was driving through Europe, hopefully not literally. Konody also published an account of a European auto tour in 1911: Through the Alps to the Appenines. The trip took Konody through France, Germany, Austria, and Italy, but he deliberately focuses overwhelmingly on Italy. Konody explains that this 370-page illustrated account would become way too bulky if he did justice to the descriptions of these other countries. Item 61. $90.

Yesterday's Muse Books may be reached at 585-265-9295 or yesterdays.muse@gmail.com. Their website is found at yesterdaysmuse.com.