The 16th-20th Century at L'Ancre Aldine 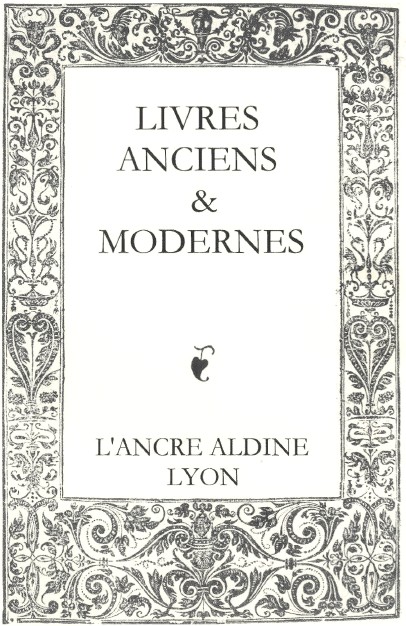 We have received our first catalogue from French bookseller L'Ancre Aldine. Located in the lovely city of Lyon, L'Encre Aldine offers a varied collection of 16th to 20th century books in their recently released catalogue 13. It is a presentation worthy of the books they offer. However, our review will be limited. This catalogue is written in French, and my own knowledge of French is limited to a few years study in high school. For those who have studied French in an average American high school, you will understand that this puts my vocabulary roughly on a par with the typical 12-month old Frenchman. Essentially, I am illiterate.

Not that there is much point in my describing books written in French, that are of greatest interest to a French-speaking audience, in English. That would be silly. So, I will mention a couple of books that will be of particular interest to American collectors, even though they are written in French. Of course my descriptions of these books may be less than perfect, since I am taking them from listings I essentially cannot understand. Nevertheless, I have never let not understanding what I was talking about prevent me from speaking up in the past, so here goes my best effort.

Item 168 is Recherches historiques et politiques sur les Etats-Unis de l'Amerique Septentrionale... This means something like research into the politics and history of the United States. To complicate matters further, its author was an Italian, Filippo Mazzei. Mazzei is mostly forgotten, and that's a shame, because he was a strong promoter of the American Revolution and the values it embodied. He was a Virginia neighbor of Thomas Jefferson, and while he first instructed that future leader in growing grapes, he also provided much advice on liberty and freedom. He also promoted the idea of a strong union between the states. While closest to Jefferson, Mazzei would also come to know many of the other leaders of American independence. This 1788 work belongs in the collection of anyone who collects Revolutionary America, regardless of which languages they may or may not speak. Item 168. Priced at €2,300 (Euros, or US dollar equivalent of $2,827).

Item 201 is Coup d'oeil historique et statistique sur le Texas. One need not be French to understand the meaning of the word "Texas." I'll translate this into a glance at the history and statistics on Texas. This is an obscure and very rare pamphlet that will be of substantial interest to Texas collectors as it was published during the Republic period, in April 1841. The author, Henri Fournel, speaks of the Texans overwhelming the "tribal savages" with their noble civilization, the Indians succumbing to strong liquor. The book also describes the principal cities, resources, and mines of the area. €3,400 (US $4,179).

While most of the titles in this catalogue are in French, there are some English-language books from Great Britain as well. For example, there are two natural history texts from John Woodward, The Theory of Moral Sentiments...by Adam Smith, an astronomy book by James Ferguson, a treatise on beauty and virtue from Francis Hutcheson, and a gardening book by Jethro Tull. There is also an album of beautiful drawings of Mexican railroad scenes by Casimiro Castro. You may find L'Ancre Aldine online at www.ancre-aldine.com or contact them by telephone at +33 04 78 42 07 60.