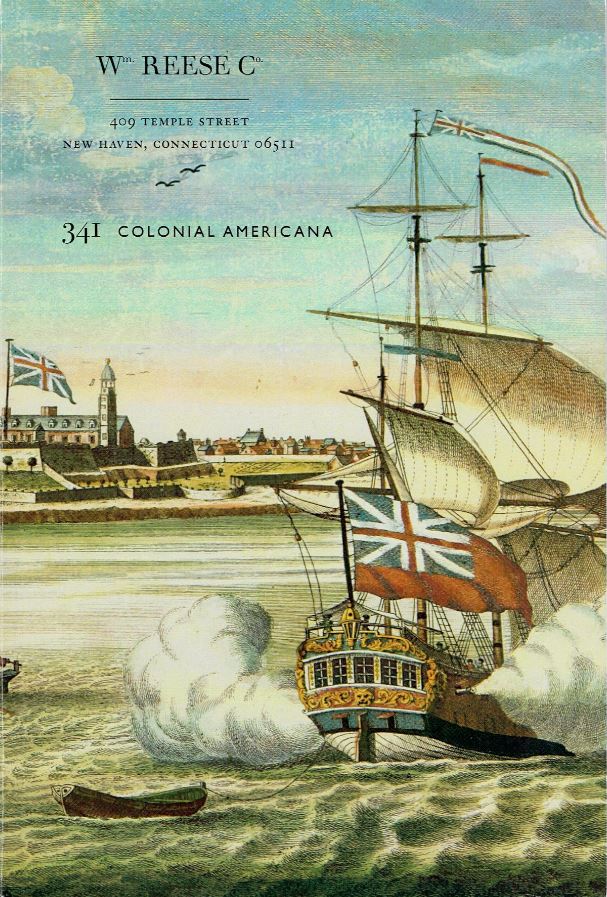 The William Reese Company has issued a catalogue of Colonial Americana. A few items are really pre-Colonial, but it does cut off with America's Declaration of Independence. Colonial no more. It is filled with important works, that begin with some of the earliest visits to the New World. Then there are colonizations – Virginia, Plymouth, more colonies along the eastern seaboard, and later inland. While a few items relate to areas to the south of the American colonies, most concern today's United States and Canada. As time advances toward the 18th century, we see explorations going deeper into the continent. Meanwhile, back where it started, in Massachusetts, theologians come to dominate much of the discourse.

By the middle of the 18th century, the British and the French can no longer tolerate each other's presence. War breaks out, the French and Indian War, and by the time it ends in 1763, the French have been vanquished from the continent. All is well for about a year, when the colonists begin to turn on their masters, feeling too heavily taxed and too much under their thumb. Antagonisms grow, the divide widens, and one day, it all breaks down. The colonists say we're out of here, or more specifically, you're out of here. And then... that is where this story ends. Colonial America is over. Here, now, are a few selections.

We begin with one of the earliest accounts of the interior of America. It requires a bit of filtering, as Recollet missionary Father Louis Hennepin never took a vow to always tell the truth. Some adventures were either fictional or simply borrowed from others. Nonetheless, he did travel farther into the northwest than any European before him. Hennepin traveled to New France in 1675, and his journey took him to the Mississippi River with La Salle. When La Salle turned back to raise more funds, Hennepin continued north, past Fort Crevecoeur (Chicago) and on to St. Anthony's Falls, near today's Minneapolis. He also provided the first eyewitness account of Niagara Falls and his book includes an engraving thereof. Hennepin was captured by the Sioux for a while, but was rescued after a few months. What is not so accurate about his account is his description of traveling down the Mississippi to the Gulf. He never made such a trip. He "borrowed" the journey from Father Zenobe Membre, who traveled with La Salle. There is also a fair amount of plagiarizing in Hennepin's account. Still, he provides the earliest look at some parts of inland America. Item 48 is the first English issue of 1698 (following the first edition of 1697) of A New Discovery of a Vast Country in America, Extending Above Four Thousand Miles, Between New France and New Mexico... Priced at $9,000.

It would take another century for a British explorer to penetrate the interior significantly farther. Item 20 is Travels Through the Interior Parts of North-America, in the Years 1766, 1767, and 1768, published in 1778. The explorer was Jonathan Carver. He was seeking a transcontinental waterway, but of course there was none, and the distance to the Pacific still thousands of miles more. Carver visited the Great Lakes, headwaters of the Mississippi, and as far west as today's Dakotas. He was also the first to mention the word "Oregon." Carver's book is said to have been an inspiration for later western explorations by Mackenzie and Lewis and Clark. $2,500.

Had Carver traveled a few years earlier, he might have been kicked out by the French. However, by 1766, they were gone, their territory ceded to the British as a result of the French and Indian War. Here is what Reese calls "the best work on the French and Indian War." It is also a great rarity. Item 62 is The History of the Late War in North-America, by Thomas Mante, published in 1772. Mante not only provides detailed accounts of the war, but a series of maps recognized as the most accurate of their time. Most of the war was fought on the western frontier and Canada. Mante's account includes a description of young George Washington's escape from an Indian's attempt to assassinate him. $80,000.

While Carver was heading west, the situation was falling apart back east. The ink was barely dry on the Treaty of Paris when fissures began to develop. The British felt the colonists should pay for their defense against the French and Indians in the war. The colonists believed they shouldn't be paying for anything if they didn't have representation in Parliament. One of the earliest to speak out forcefully against the British was James Otis, Jr., a member of the Massachusetts assembly. Indeed, Otis had been criticizing the British as early as 1761. In 1764, he condemned the Sugar Act. In 1765, he anonymously published in London Considerations on Behalf of the Colonists in a Letter to a Noted Lord... It originally had been published in the Boston Gazette. In this one, he takes on Soame Jenyns' defense of the Stamp Act, finding the latter's argument that colonial representation would defile Parliament laughable. Otis is best known for coining the expression "taxation without representation is tyranny." Unfortunately, Otis is not as well remembered as other founders of the nation as he soon suffered mental deterioration, aggravated by a blow to the head from a customs official in 1769. He was no longer able to participate meaningfully in the public debate, particularly unfortunate as Otis believed that basic rights applied to black people as well as whites. Item 85. $3,500.

The ultimate, and most valuable book ever printed in what is today the United States is the Bay Psalm Book. It is valuable because it was the first. The first edition was published in 1640. It is next to unobtainable, though the Old South Church in Boston did sell one of its copies in 2013. It went for over $14 million, putting it out of reach of most every collector. The Bay Psalm Book was later published in many more editions, but use of the book was such that very few copies of any edition survive. Indeed, no copies are known of the second, fourth, fifth, sixth, or eleventh editions. While eleven copies, some incomplete, of the first edition have survived, there are only eleven more extant copies of editions 2-12 combined. Item 8 is a copy of the 1705 twelfth edition of what is technically The Psalms Hymns, and Spiritual Songs, of the Old & New Testament... This copy is not perfect (missing the title page), though it is far more complete than the one other surviving copy of the twelfth edition. Item 8. $50,000.

There was another controversy going on at the end of the French and Indian War in 1763, though not one so monumental as the impending split between Britain and its colonies. This one was over the appropriateness of playing instrumental music in church. James Lyon believed it was, and left little doubt about his feelings. Item 60 is The Lawfulness, Excellency, and Advantage of Instrumental Musick in the Publick Worship of God Urg'd and Enforc'd... Lyon was a Presbyterian minister who served in Nova Scotia and today's Maine. He would later be an American patriot who corresponded with George Washington about the feasibility of an attack on Nova Scotia. In this text, Lyon urges Presbyterians to drop their hostility to instrumental music, perhaps a bit inflammatory in his exclamation, "Stupid, therefore, beyond all Possibility of Excuse, must those groveling Souls be, who cannot hence learn the Lawfulness and divine Approbation of Instrumental Musick!" Lyon published this work anonymously. $3,000.

This was the major source of information about the Iroquois tribes in colonial times: The History of the Five Indian Nations of Canada, which are Dependent on the Province of New York in America, and are the Barrier Between the English and the French in that Part of the World. The author was Cadwallader Colden, a physician who at the time of this writing was colonial representative to the Iroquois nations. Many years later he was Governor of New York. Colden's book was the only one at the time that provided anything more than general descriptions of the Iroquois. The first edition was issued in 1727, and is even rarer than the first edition of the Bay Psalm Book (ten copies survive). This is a copy of the greatly expanded second edition, which was published in 1747. Item 28. $3,500.