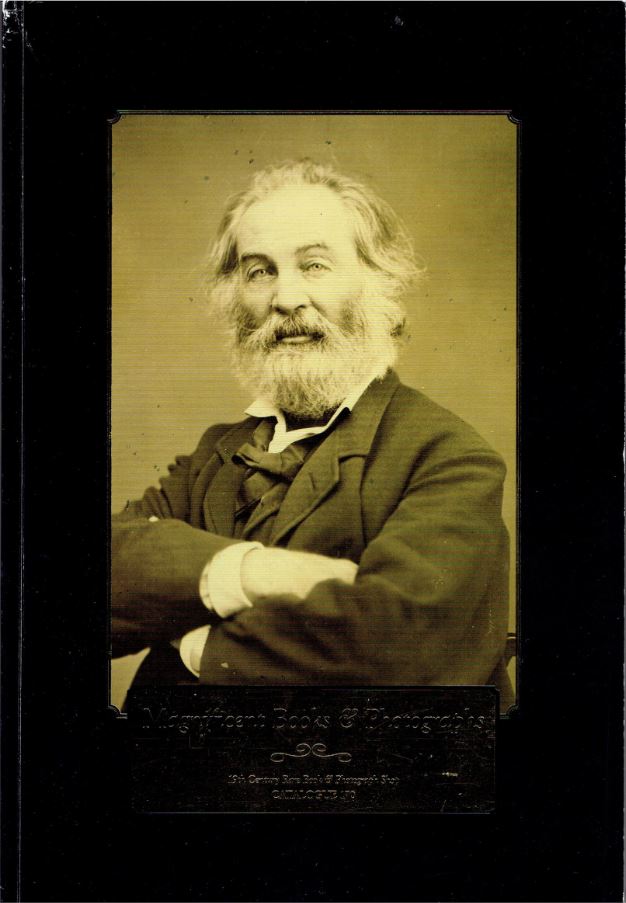 The 19th Century Rare Book & Photograph Shop has released a catalogue of Magnificent Books & Photographs. We might add that the catalogue is magnificent as well, but nothing less would make sense for the type of material found within. There are books and photographs, as one would expect, along with numerous manuscripts. The names are largely familiar – Lincoln, Roosevelt, Hamilton, Jefferson, Shakespeare, Twain, Wilde, Locke, Whitman, Poe, Newton, Darwin, Watson & Crick, Armstrong, Freud, Muybridge, and many more. Others are related to such things as places rather than specific people. These are amazing items, for collectors at the top end of the market. Here are a few.

We begin with a remarkable photographic portrait, one which includes Abraham Lincoln in what may have been the last happy days of his life. It was taken in Springfield, in 1860, before his journey to lead his country through four years of terrible strife. Five years later, he returned in a casket. This picture shows Lincoln standing on the porch of his Springfield home. It is the only house he ever owned. Standing next to Lincoln is his third son, Willie, with his youngest, Tad, mostly obscured by a post. Willie would return to Springfield the same way as his father, dying at the age of 11, while Tad outlived Abe, but died shortly after his 18th birthday. There was much tragedy ahead for this family, but it was not apparent on what looks to have been a nice day. Priced at $18,000.

Next is a photograph of the grisly conclusion to the sad Lincoln history. It is a gallows, with a group of people standing on it. Four of them were about to be executed. They were Mary Surratt and three men, all convicted of participating in the assassination of Lincoln or attempts to assassinate the Vice-President and Secretary of State the same day. The trial took seven weeks, and the verdict had to go to President Johnson for approval. He approved it on July 5, 1865, and to the surprise of the defendants, they were hanged the next day. In the photographs, attendants are in the process of putting hoods over the heads of the soon-to-be executed. $20,000.

Samuel Clemens/Mark Twain (we'll call him Twain for convenience) is noted for his many humorous stories, but he could be serious on occasion. We can see some of the serious side, humor intermingled, in The Love Letters of Mark Twain. It's hard to imagine that Twain wanted his love letters published, but he had little say in the matter. He had been dead for 39 years when they were published in 1949. The letters span the years of Twain's romance with his beloved wife Livy, from their initial courtship in 1868 until her death in 1904. Livy had rejected his initial entreaties, so he wrote her of his disappointment. In a plaintive cry, he says he can accept her decision since his life has had its share of "grief, disaster & disappointment." "So, I shall bear this last & bittersweet, even though it break my heart." It worked. A couple of months later, they were engaged, and married in 1870. This book has been signed by Twain, both as Twain and Clemens. You might wonder how Twain signed a book 39 years after he died. Good question. Many years earlier, Twain had signed numerous blank leaves for a planned book, but he died before it could be published. Harper & Brothers had these sheets hanging around all these years when Love Letters was published. One was tipped in to each of the 155 copies printed. $12,500.

If there was a sense of being a bit overdramatic in that entreaty, this next Twain writing is dark and filled with the deepest despair. It was very real. In 1896, his daughter Susy, just 24 years old, died. Twain suffered multiple tragedies in his later years, outliving his wife and three of his four children. Twain wrote this manuscript in 1902 of In Memory of Olivia Susan Clemens, 1872-1896. It was perhaps a catharsis for the despondent Twain. He intended it to be printed only for private circulation. He wished no one but his closest friends ever to see it. Ultimately, that private edition was never printed. Herein, Twain laments an apparent meaninglessness of life. He writes, "...men are born, they labor and sweat & struggle for bread, they squabble & scold & fight, they scramble for little mean advantages over each other; age creeps upon them, infirmities follow; shames and humiliations bring down their prides and their vanities; those they love are taken from them & the joy of life is to aching grief: the burden of pain, cares, misery grows heavier year by year; at length ambition is dead, pride is dead, vanity is dead, longing for release is in their place; it comes at last, the only unpoisoned gift earth ever had for them & they vanish from a world where they were of no consequence, where they achieved nothing, where they were a mistake & a failure & a foolishness, where they have left no sign that they have existed; a world which will lament them a day & forget them forever. Then another myriad takes their place." Very dark. No humor here. Eventually, this memorial was published posthumously as part of Twain's Autobiography in 1924. Price on request.

There are but a few finalists for the most important science text ever written. This is one of them: Philosophiae Naturalis Principia Mathematica. This is Isaac Newton's Principia, a first edition, published in 1687. This copy is the first state, or English edition (some copies were printed for distribution in England, others for Europe). Printing and the Mind of Man best expressed its significance with, "Copernicus, Galileo, and Kepler had certainly shown the way, but where they described the phenomena they observed, Newton explained the underlying universal laws." Up to that point, it was believed that the laws governing what went on in the sky were different from those that applied on earth. Newton established that they were the same, with gravity and the laws of motion being the forces that determined what went on throughout the universe. $850,000.

Who was the earliest born person to have his likeness preserved in a photograph? It is unclear as birth dates in the 18th century were often uncertain, but this man is one of if not the first born. Baltus Stone was a veteran of the American Revolution, and not even one of its younger participants, when he was photographed 1846. He was a common man, one who described himself in 1820 when applying for a veteran's pension as an indigent day labourer unable to work because of decrepitude and infirmity. The inscription on the photograph gives his date of birth as 1744. His obituary listed 1743, his pension application 1754, a family bible as 1747. Other than a slave with an uncorroborated birth year of 1737, 19th Century was unable to find anyone else who was photographed with a birth year listed prior to 1745. Stone died a few months after this daguerreotype was taken. $50,000.

There is much more of importance and interest to be found here. There is a Shakespeare Second Folio, Curtis' massive North American Indian photographs, Poe's Raven and Other Poems, the earliest photograph of John D. Rockefeller (as an 18-year-old bookkeeper), the first printed sheet music of the Star Spangled Banner, a Darwin family photo album, pre-earthquake photographs of San Francisco buildings by a Vanderbilt family owner, a large photograph of 19th century Siamese twins Chang and Eng, and much more.