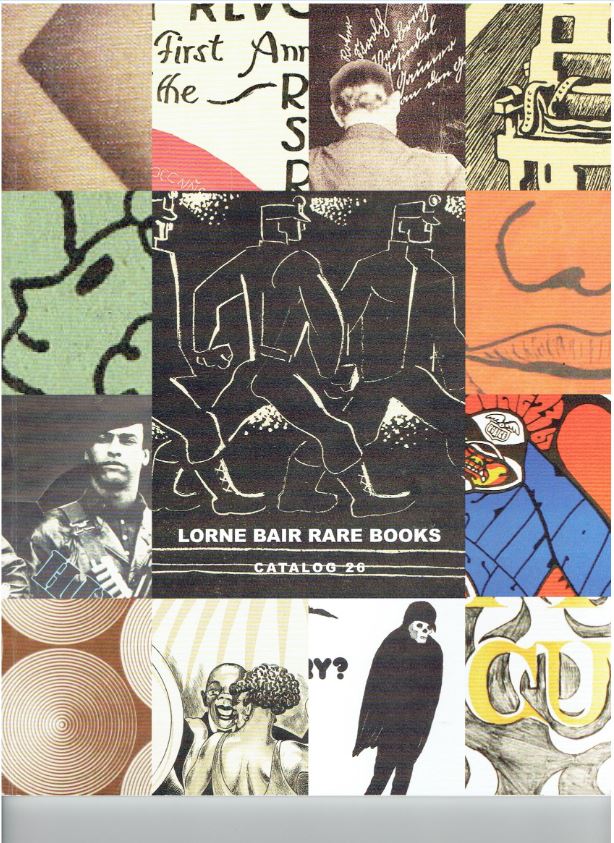 Lorne Bair Rare Books has released their Catalogue 26. Bair focuses on social movements, radical ones in particularly. Mostly, these are leftist movements, but this time we find a few more opinions from the far right, so we will mention a few of them in this review. What you won't find here is much from the middle, although there are some more moderate appeals within the category of African Americana. The catalogue is divided into four sections: African Americana, Radical & Proletarian Literature, Social & Proletarian Literature, and Art & Photography. I guess you can call this review a piece of proletarian literature. Here are a few items from the catalogue.

In the annals of women's rights in the 19th century we find many great names, such as Susan B. Anthony. And then, there were the Claflin sisters. They were among the most noteworthy, but a pair with more radical views and odd behavior. Virginia (Claflin) Woodhull went down in history as the first woman to ever run for the presidency. She ran against incumbent Ulysses S. Grant in 1872. She lost. Her official running mate, Frederick Douglass, did not acknowledge the nomination and campaigned for Grant, she could not have served because she was under age 35, could not vote because she was a woman, and could not have made it to the polls on election day because she was in jail. That latter impediment leads us to the author of this book, Tennessee Celeste Claflin, better known by the clever Tennie C. Claflin, Woodhull's sister. Their father was a con man, and evidently a teacher. They learned. However, their best trick was getting money from rich men, using their obvious charms. Tennie managed to have a relationship with Cornelius Vanderbuilt, the wealthiest man in the world. So did Virginia. Nothing like aiming high. It started with spiritual readings, with which the aging Vanderbilt was intrigued, though rumors said it became something more. The sisters published a magazine, Woodhull and Claflin's Weekly, which promoted feminist and libertine views. Their publishing details of Rev. Henry Ward Beecher's affair is what put Virginia in jail on obscenity charges on election day. In the year prior to the election, Tennie published this feminist book: Constitutional Equality A Right of Woman... It advocates women's rights, along with other controversial positions, such as free love (she considered marriage sex slavery). It should also be noted that the Claflin sisters opened the first woman run stock brokerage on Wall Street (with Vanderbilts's financial assistance). When the Commodore died, his son gave the sisters a healthy sum of money to leave the country. They moved to England, where Tennie entered into the institution of sex slavery with another old guy and became a Viscountess. Item 150. If all of this doesn't make you want to buy this book, I don't know what will. Priced at $1,250.

This next item is a crime story more than a social one. John Hauff, and three associates, decided to rob the bank in Leonore, Illinois. They managed to enter and make off with the sum of $13. The price they paid was much more. The bank president discovered what was going on, called the police, and some civic-minded citizens. There was a shoot-out, several of the locals died, and eventually, the thieves were captured, all but one who chose to shoot himself instead. That was in January of 1935. Two months later, the trial set, Hauff pleaded guilty. He hoped to escape the death sentence. The other two were convicted. All, Hauff included, were sentenced to death. A local preacher, P. B. Chenault, ministered to Hauff and reported that he had found the Lord. Chenault wrote about it in this book, The Story of John Hauff, Convict Number 1164: A Monument to Saving Grace. Hauff must have found the Lord quickly, as within two months of his sentencing, he made his last stand (or seat) in the electric chair. The Lord found John Hauff on that day. Item 111. $175.

This poster is headlined KIDNAPPED, but it wasn't published by the FBI. It came from the Black Panther Party in Oakland in 1969. Pictured on it is one of the party's founders, Bobby Seale. Seale was wanted for inciting a riot at the Democratic Convention in Chicago in 1968. As Seale described it, he was surrounded by at least 15 police officers and FBI agents, handcuffed, and whisked off to the San Francisco jail. He was next extradited to Chicago, where he was placed on trial as part of the "Chicago 8" (later reduced to Chicago 7 when he was tried separately). He was sentenced to 4 years in prison for contempt of court, later overturned, and soon thereafter, charged with murder (the charge was dismissed after the case ended in a hung jury). Seale long ago renounced violence, but to this day remains involved in supporting causes for social justice. Item 4. $5,000.

For any younger folks who may not understand what led to such radicalization in the black community, here are a couple of examples. Item 26 is a "study" of Sexual Crimes Among the Southern Negroes, by Hunter McGuire and G. Frank Lydston, published in 1893. McGuire was a well-known racist and apologist for the Confederacy, Lydston a Chicago specialist in sexual deviance. The authors claim that pre-Civil War, there were few black rapes of white women, but now it has become commonplace. Lydston cites hereditary reasons in blacks, such as "a disproportionate development of the animal propensities," and "defective development of centers of inhibition." He goes on to explain the behavior as, "When the Ashantee warrior knocks down his prospective bride with a club and drags her off into the woods, he presents an excellent prototype illustration of the criminal sexual acts of the negro in the United States." $450.

This next piece expresses its sentiments in a sugary way, while basing its case on the same element – lies. It is a comic book, headed We the People, put out by the Louisiana State Sovereignty Commission, a state, taxpayer-funded agency in the 1960's. In it, a boy and his father discuss the U. S. Constitution, the father emphasizing states' rights provisions. Unfortunately, some dastardly federal judges have been ordering the mixing of races in their schools, regardless of how the people of Louisiana feel. The boy asks, "You mean like in Little Rock [site of a major desegregation action]. But colored people have nice schools. Lots of them are better than ours. Wouldn't it be fair to have separate schools so long as they are equal?" You would think the white father would favor integration, so his son could go to a school as good as those offered black children. But no, he did not care about his son's education. He preferred the inferior schools for whites and returning to the days when "we all got along just fine." The problem, he explains, is caused by impractical people and, of course, Communists. The wise father concludes by explaining, "if the Federal grabbers will just let us work out our own problems, race relations and a lot of other things will be happier again." Item 23. $200.