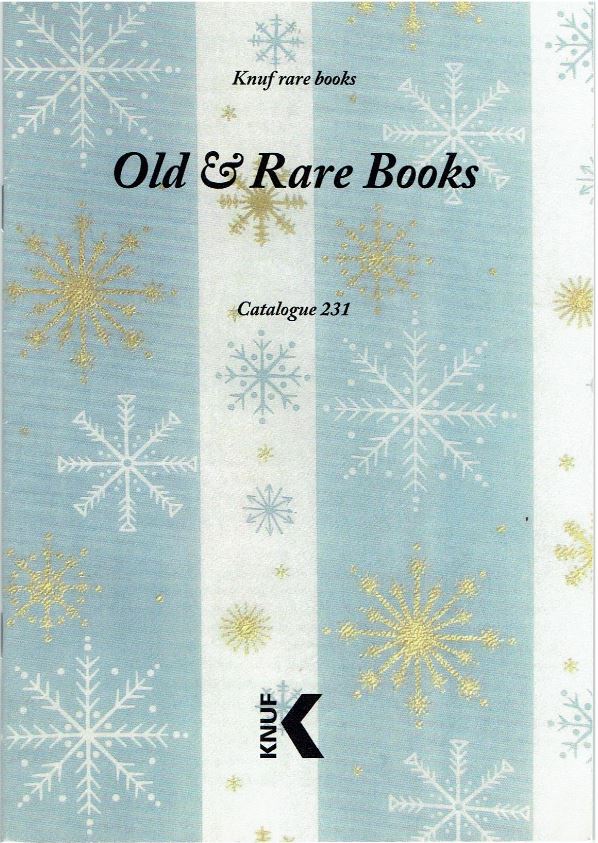 Knuf Rare Books has issued their Catalogue 231 of Old & Rare Books. Knuf is located in France, so many of the books are from France or written in French (though a good number are in English and other European languages). However, the catalogue itself is written in English, an indication that the material is likely to appeal to many collectors in English-speaking lands. The concentration of items is in the broader books-about-books field, covering such things as printing arts, papermaking, and including numerous 18th and 19th century auction catalogues of major collections. Here are a few selections from this latest Knuf catalogue.

There was a time when church cardinals were often powerful political leaders and builders of great libraries. Cardinal Mazarin was both. Mazarin succeeded Cardinal Richelieu as King Louis XIII's Chief Minister of France in 1642 after the latter died. The following year, Louis XIII also died, to be succeeded by Louis XIV. Louis XIV was all of five years old at the time. Not surprisingly, Mazarin became enormously influential, effectively ruling France with Louis's mother, who served as regent during her son's minority. Mazarin remained a powerful figure in France until his own death in 1661. At the same time, Mazarin built a spectacular library. He was a noted bibliophile and supporter of writers. Helping him to build his library was his librarian, Gabriel Naudé. What was even more notable about Mazarin's library was that he opened it, first to scholars, and then to the general public. It was the first public library in France. Item 60 is Naudé's treatise on libraries, Advis Pour Dresser une Bibliotheque... This is a second edition, from 1644 (the first was published in 1627). In this expanded edition, Naudé provides guidance in building a library, still influential today. He stresses the importance of obtaining all kinds of books, regardless of the author's political or religious beliefs. He also emphasizes the importance of a library being open to the public. Priced at €2,750 (euros, or approximately $2,941 in U.S. dollars).

William Morris was a writer, poet, and prominent socialist advocate when, late in life, he founded his private press. It was a reaction to the unattractiveness of mass-produced books, a throwback to the earlier times of craftsmanship. In 1891, Morris' Kelmscott Press published its first book, The Story of Glittering Plain, written by Morris. Three years later, he republished the work, the only book he printed twice. Item 43 is a copy of that second, 1894 edition. It is one of 257 copies printed. The first edition lacked illustrations, but this one contains 23 wood engravings. That is more illustrations than any other Kelmscott book other than the legendary Kelmscott Chaucer. €6,800 (US $7,275).

Item 65 is an announcement of some protectionist regulations to defend the British papermaking industry in 1687. When the Edict of Nantes, protecting Protestants in France, was revoked in 1685, many French Protestants emigrated to safer locales, notably the Netherlands and England. Among them were many papermakers. England was behind France in the art, but the arrival of French experts quickly helped the business expand. Evidently, some in France wanted these people to return, leading King James II to issue this broadside: A proclamation for the encouraging and better establishing of the manufacture of white paper in England. It prohibited agents from attempting to lure papermakers out of the country, or to ship such raw materials as rags out of the country, offenders to answer "at their utmost Perils." €230 (US $246).

Claude Gros de Boze held various financial and library positions in France. He was a respected intellectual, and evidently quite well-off financially. He developed one of the great libraries of the 18th century. De Boze died in 1753, whereupon his books were put up for sale. The sale never got far. Jules Francois Cotte and Charles Robert Bouton swooped in and bought the entire library. They, in turn, sold the bulk of the library to another collector, kept the items each wanted for themselves, and sold the remainder at auction. Item 13 is a catalogue of that auction, published in 1754: Catalogue de livres provenans de la bibliotheque de feu M. de Boze... While this sale may have been the unwanted "leftovers" of Cotte and Bouton, it wasn't just a bunch of unimportant books. Among those offered was a Gutenberg Bible. €1,750 (US $1,872).

R. Hoe and Company was the major American manufacturer of printing presses in the 19th century. Robert Hoe founded the company in the early part of the century, first making saws, then expanding to printing presses. Naturally, they published many trade catalogues promoting their presses (how could a press manufacturer not do so?). However, this one is unusual, Knuf unable to locate another copy. It is in Spanish. It promotes the presses of R. Hoe y Compania. It was printed by Wynkoop & Hallenbeck of New York in 1874, one would assume on a Hoe press. While Hoe & Co. still exists today, back to making just saws, it generated great wealth for its owners at an earlier time. Robert Hoe III, grandson of the founder, was a great book collector and founder of New York's Grolier Club. When his library was sold, in 1911, after his death two years earlier, it was far and away the most valuable sale ever in America. Item 40. €2,750 (US $2,941).