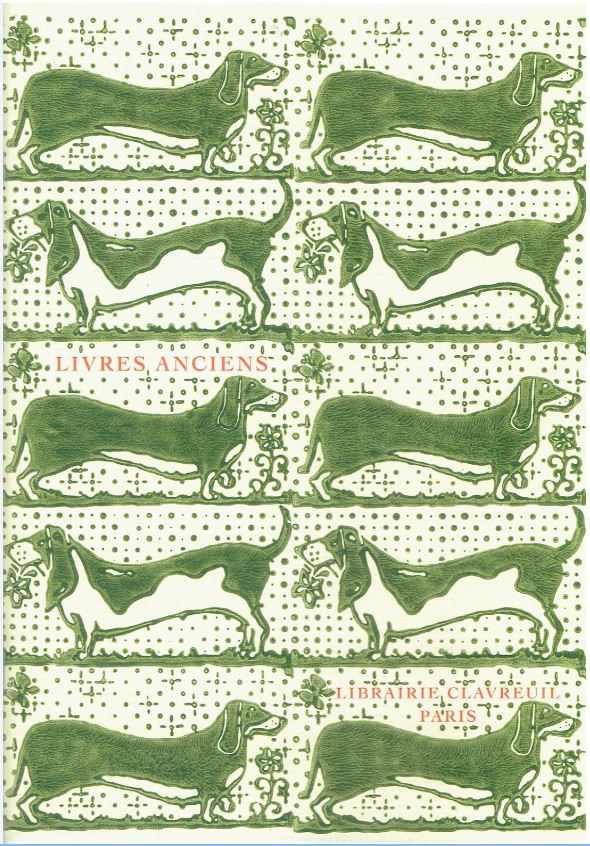 Librairie Clavreuil of Paris has issued their catalogue 46 of Livres Ancien (antiquarian books). The catalogue is written in the French language, as are the majority of the books. There are some in Latin and other European languages, and a good number of books originally published in other languages offered in their French editions. These are old, often very old, books on a variety of topics. We note there are many medical books, botanical, zoological, and other scientific works, some literature and poetry, travel accounts, even a few catalogues of long ago book auctions. If you have an interest in antiquarian books with some type of tie to France, you will undoubtedly find material you would like to own. Here are a few examples.

We begin with a French edition with a major American connection. Item 56 is the Oeuvres de M. Franklin (Works of Mr. Franklin), as translated by Jacques Barbeu Dubourg and published in 1773. The Mr. Franklin is America's Benjamin Franklin, and this book is an expanded translation of the 1769 fourth edition of Franklin's Experiments and Observations on Electricity. Franklin was a great scientist, as well as political leader, printer, and anything else he chose to be. His association with electricity from his kite and key experiment is well known. This book contains descriptions of Franklin's experiments and conclusions. Translator Barbeu Dubourg was himself a scientist, primarily a botanist as well as physician, from France. He was also a friend of Franklin, whose connections with French people such as Barbeu were instrumental in generating crucial French military aid during the American Revolution. This French edition was the most complete look at Franklin's scientific views to date as it contains additional information not found in the American editions. In particular, it includes correspondence between Franklin and Barbeu Dubourg discussing topics such as magnetism and its relation to electricity, acoustics, meteors, inoculation, ventilation, swimming, the cause of common colds, and an item for which Franklin is well known – stoves. Priced at €1,800 (euros, or approximately $1,912 U.S. dollars).

Here is a major work of Canadian history, French Canada in particular. Marie Guyart was born in France in 1599, and as a young girl, was intensely drawn to religious rituals. She had her first vision, a meeting with Jesus, when she was seven. She wished to join a religious order as a teen, but her parents objected, having her marry a silk worker, Claude Martin, instead. While the marriage was happy, it was short lived. Two years later, shortly after the birth of her only son, also named Claude, her husband died. Marie spent the next decade living with family, experiencing more visions, and becoming more devoted to her religious calling. In 1631, she joined the Ursulines, adopted the name Marie de l'Incarnation, had a vision that she was called to serve in a sparsely inhabited land, came to conclude it was Canada, and finally gathered the financial resources to make the move. She was off to Quebec where she and her companions founded a monastery and the first girls' school in the New World. Her school taught both French and native students, her focus being to Christianize native girls and teach them proper behavior according to French standards. She wrote a couple of autobiographies, mostly lost, but her work and experiences were preserved by the thousands of letters she sent home until the end of her life in 1672. Item 116 is La Vie de la Vénérable Mere Marie de l'Incarnation, a collection of letters to and compiled by her son, Claude Martin, in 1677. They form one of the best histories of Canada during the middle of the 17th century. Marie de l'Incarnation was beatified by Pope John Paul II in 1980 and equivalent canonized by Pope Francis in 2014. €2,000 (US $2,129).

This next work also concerns America, but goes back more than a century earlier. It involves the Spanish conquest of the New World, and a dispute between Gines de Sepulveda, who justified the horrible brutality of the conquerors, and the great humanitarian, Bartholome de las Casas: Aqui se contiene una disputa, o controversia entre...de las Casas y...Sepulveda sobre las conquistas de las Indias, published in 1552. In 1550, the two disputants were called by King Charles V to air their positions before a group of theologians and jurists. Sepulveda, who had never been to the New World, argued that slavery was the appropriate station for the natives of the New World, that they existed for manual labor and not much else. Las Casas argued against the brutality with which they were treated and for their dignity as human beings. They were arguments Las Casas made frequently based on his own observations in the New World, sadly, with limited effect. This tract includes a description of the debate by Domingo de Soto, Sepulveda's position, and Las Casas' response. Item 90. €12,000 (US $12,850).

This next item - Histoire des Amours et des Infortunes d'Abelard et d'Eloise – needs some explanation to appreciate. It is a poem concerning the affair of Abelard and Eloise, an event that goes back to the 12th century. Eloise was apparently a very bright and learned young lady, Abelard a renown teacher, older than her. He became her teacher, and along the way, seduced poor Eloise. She became pregnant, with Abelard reluctantly agreeing to marry her, provided the marriage was kept secret. Abelard at some point had her shipped off to a nunnery. However, Abelard's friends or family found out about his misbehavior and had him castrated. Abelard sent himself off to a monastery, but years later, the two exchanged romantic letters. That's basically the story as best recalled 800 years later. Alexander Pope wrote a heroic poem in 1717 about this epic romance of sorts, perhaps a bit more epic than it was. That brings us to this work, by "Armand" (Francois Huguet), published in 1724. Huguet was a French comic and this is a satire in verse of Pope's work. It was undoubtedly quite amusing, though an understanding of its times is probably required to fully appreciate its humor. Item 4. €850 (US $910).