The Adirondacks and Beyond from Riverrun Books & Manuscripts 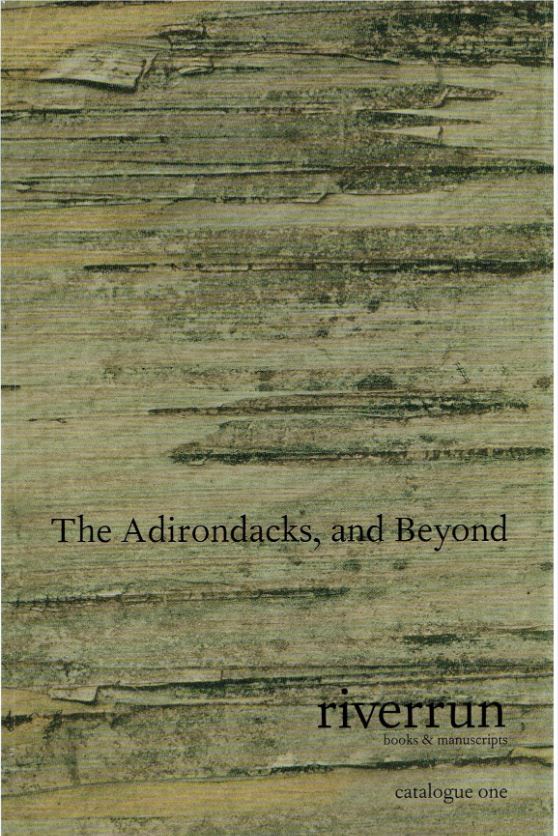 The Adirondacks and Beyond.

Riverrun Books & Manuscripts has issued their Catalogue One, The Adirondacks, and Beyond. First, a note about Riverrun. Despite the "catalogue one," Riverrun, of Hastings-on-Hudson, a little north of New York City, has been around since 1978. The "on-Hudson" likely explains the Riverrun name. This is a first catalogue despite the almost four decades of existence because just last summer, the firm was purchased by Tom Lecky, who has published his first catalogue. Mr. Lecky previously served as Head of the Printed Books & Manuscripts Department at Christie's New York.

Now, we go to the catalogue. For those unfamiliar with the Adirondacks, they are a chain of mountains in northern New York State. The area was long ago designated by the state as the Adirondack Park. As such, strong regulations are in place to keep the area forever in a natural state. It is the largest such publicly protected area in the original 48 States. Riverrun notes it is larger than the Grand Canyon, Yellowstone, the Everglades, and Glacier National Parks combined. However, it is not all publicly owned. The land is roughly evenly divided between state and private ownership. The private part, like the public, is subject to the environmental regulations. The pristine, wild nature of the park made it a popular vacation spot for well-heeled city dwellers in the 19th century, especially after railroads made traveling to it fast and convenient. The result is that much of the material here offered relates to the park's major industry – the tourist trade.

The Adirondacks are the source of half of the material in this catalogue. The rest is the "beyond," partially other Americana, and the rest simply a variety. Here are a few selections from the first catalogue from the new Riverrun.

Here is a way to get a good look at the Adirondacks and other picturesque regions of upstate New York in the late 19th century. Item 44 is Picturesque American Resorts. Phototype Views of Lake George, The Adirondacks, and the Hudson River Valley. This would have been prime summer vacation territory for New York City dwellers at the time it was published – 1892. The publisher, and photographer for most of the 37 photographs, was Seneca Ray Stoddard. Seneca Ray opened a studio in Glens Falls, New York, no later than 1867, and over the next 40 years, produced thousands of photographs of the region. He also created promotional photo albums such as this one for use at New York's resorts. Many of these photographs are of the favorite vacation spot of Lake George, but locations range from Lakes Champlain, Placid, and Saranac in the north, to Albany and the Hudson River in the middle of the state, to Niagara Falls in the west. Stoddard brought his photographs to the New York State Legislature in 1892, which played a role in the decision to create Adirondack Park. Along with the photo book, Riverrun is offering a couple dozen individual photographs by Seneca Ray Stoddard. Priced at $500.

Thirty years after the Adirondack Park received its designation, a group of private citizens gathered together to form an organization devoted to improving and protecting the park. They wanted to make it more accessible while at the same time preserving its natural resources. The Adirondack Mountain Club was formed, and they began building trails, a couple of lodges, and in 1934 published their first official guide. Here it is: Guide to Adirondack Trails Northeastern Section. It includes descriptions of the areas covered, a folding map, and suggestions on starting an Adirondack Library. Among the club's members were Franklin and Eleanor Roosevelt, and today the club has 30,000 subscribers. Item 68. $400.

Next up is a 1931 account of A March on Pharoah. It is from a limited edition of 150 copies. Pharoah Mountain is located about 30 miles north of Lake George. The privately printed tale of the hike was written by brothers Alvin and Ben Grauer. Ben, 23, and mostly unknown at the time, may be familiar to a few of you, at least the old timers. Ben Grauer went on to be an actor and announcer, appearing in a few movies, although he is best known for his years in radio, and later television. He worked with NBC's early newsman, John Cameron Swayze, providing the first live coverage of national political conventions when they still mattered. He later had a TV show focused on books and authors, and was working on a pricing history when he died in 1977. Those not familiar with his earlier work may still remember his coverage of New Year's Eve from Times Square in New York for NBC. He, and band leader Guy Lombardo, were New Year's Eve fixtures for Americans through the 1950's and 1960's. This book is dedicated to noted type and book designer Bruce Rogers. Item 66. $400.

"THE Princess Charlotte is dead. She no longer moves, nor thinks, nor feels. She is as inanimate as the clay with which she is about to mingle. It is a dreadful thing to know that she is a putrid corpse..." Percy Bysshe Shelley certainly had a way with words! Actually, there is much behind these biting comments from "We Pity the Plumage, But Forget the Dying Bird." An Address to the People on the Death of Princess Charlotte, attributed to "The Hermit of Marlow" (Shelley). Princess Charlotte was the sole legitimate offspring of the Prince of Wales, the future King George IV. By this time (1817), King George III was practically insane. While he had a bunch of sons ready to take over in his stead, Charlotte was the only legitimate grandchild available to serve after they passed on (Victoria was not yet born). Therefore, her death in childbirth at age 21 was a cause of major consternation for the English, especially since neither the insane King nor the Prince of Wales were much liked by the public. However, Shelley's address was not intended to mourn the Princess, whom he regarded as fluff, neither good nor bad, a privileged being without the real life experiences to intelligently rule anything. Shelley's purpose was to decry the death by execution of three participants in what is known as the "Derby Insurrection," or "Pentrich Rebellion," who died at practically the same moment, but were not being mourned. This was an ill-advised and ill-fated laborers' uprising that was encouraged by a government spy, so as to give it cause to execute some people they found threatening to the privileged. It was their execution, and what it represented, that so offended the liberal-minded Shelley. The address was published in 1843, claimed to be a reprint of an edition originally published by the author in 20 copies in 1816. However, no evidence beyond this one claim has ever surfaced that such an edition existed, and most now believe that to be a false claim, that this is the actual first edition. Certainly, such an edition could not have been printed in 1816 since the events discussed did not occur until 1817. Item 108. $1,000.