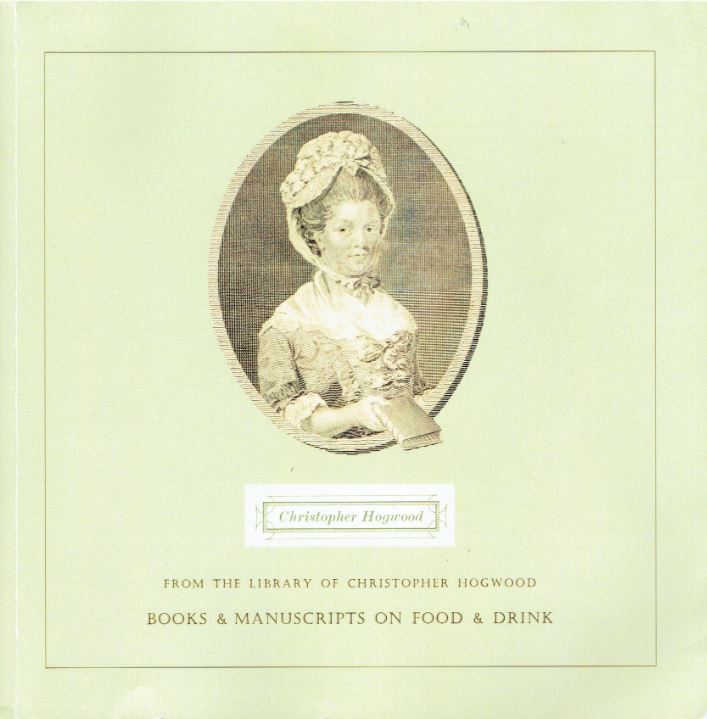 Mrs. Raffald graces the cover of Bernard Quaritch's catalogue of food and drink.

The late Christopher Hogwood made his reputation reproducing antiquarian music. His résumé was long and varied, including positions in his home country of England and Europe, along with a stint as Artistic Director for Boston's prestigious Handel and Haydn Society. Hogwood focused on old instruments and reproducing the sound as it was centuries ago. One might expect that his library would be devoted to books about music and musical scores. That expectation would be incomplete. Mr. Hogwood had a second love – food. Of course, we all love food, but just as he focused on antiquarian music, so did Hogwood focus on antiquarian food. Indeed, he saw a great similarity between the two.

Bernard Quaritch Ltd. recently issued a catalogue entitled From the Library of Christopher Hogwood, Books & Manuscripts on Food & Drink. The library represents not just a collection for the sake of collecting, but his source for recreating the foods people ate many generations ago. As such, these books can be used for a collection, for research, or even, as did Mr. Hogwood, whipping up something unusual in the kitchen. Here are a few samples from the library.

We begin with a manuscript recipe book from the 17th century, kept by an unknown cook. It consists of 75 dishes, some of which may make people today a bit squeamish. Then again, some people may still enjoy roasted calf's head, hogs' feet and ears, and pickled pigeons. At least pickling pigeons provides some use for these generally annoying birds. It also includes a "Pudding from Turkey," which is not, thankfully, pudding made from the fowl, but a Turkish pudding. That sounds better until the ingredients are revealed – bread, anchovy and oysters. I'm one of the few people who like anchovies, at least on pizza, but in pudding? Quaritch notes, these "epitomise dishes which fell out of favor," indeed an understatement, but then adds, "became fashionable again at the end of the twentieth century." It takes a strong stomach to be fashionable these days. Item 1. Priced at £3,000 (British pounds, or approximately $3,668 in U.S. dollars).

In case you do not immediately recognize the lady on the cover of this catalogue, she is Elizabeth Raffald, her dress and bonnet appropriate for her era, the 18th century. Mrs. Raffald was for fifteen years a housekeeper for Lady Elizabeth Warburton, to whom she dedicated this book. In the process, she put together a selection of 800 recipes, along with picking up a husband, John Raffald, the estate gardener. Though employed as a housekeeper, Mrs. Raffald was better educated than most in her station, her father having been a teacher. She proved a very successful author with this book, The Experienced English Housekeeper... It went through 13 authorized editions from 1769-1810, along with 25 pirated ones. This is the eleventh, from 1794. She never intended to have her portrait included with her recipes, it only appearing from the eight edition on, published after she died. After working on the Warburton estate, she sold the rights to her book for £1,400, an enormous sum in her day, and opened up a confection shop and engaged in other business ventures. She was a shrewd businesswoman, but unfortunately, Mr. Raffald was a drunkard and spendthrift, wasting her earnings. A 19th century book claimed she had 16 children, all daughters, though church records show only 6. Many historians say the number was 9. What is known is she outlived all but 3 of them, though she died at age 48. Hopefully, none of this reflects on her cooking. Item 46. £700 (US $854).

Quoting V. McLean's 1981 bibliography of English cook books, Quaritch notes that Mrs. Raffald was, "after Hannah Glasse, the most celebrated English cookery writer of the 18th century." Here is Hannah Glasse's The Art of Cookery, Made Plain and Easy, Which Far Exceeds Any Thing of the Kind Ever Yet Published... Evidently, Mrs. Glasse did not suffer from excessive modesty. Item 23 is a third edition, published in 1748. The book's popularity was such that it was printed in 20 editions, continuing well into the next century. Unfortunately, Mrs. Glasse suffered financial difficulties, was forced to sell the copyright to her popular book, and ended up in debtor's prison, where meals probably did not meet her expert standards. Mrs. Glasse did not identify herself in the book, authorship attributed simply to "a Lady." It took 200 years for this to be conclusively established. However, it led to an interesting dispute between good buddies James Boswell and Samuel Johnson. Boswell claimed it was written by a Dr. Hill, on the grounds that such a well-ordered book could not possibly have been written by a woman. Johnson responded that it must have been written by a woman as the book contained a misunderstanding of saltpetre that no man could ever make. I'm not sure which of these two characters was the greater male chauvinist. £3,000 (US $3,668).

You may not be aware of this, but Joseph Conrad once wrote a preface to a cookbook. Why? Perhaps it had something to do with the author being his wife, Jessie Conrad. Friends thought Jessie an odd match for Conrad, an ordinary working class woman matched with a great writer, but she was known as an excellent cook. Conrad was a great devotee of his wife's cooking, and pushed to have her cookbook published. In his preface, he opines that good cooking promotes good health better than any "quack's" medicine, and that he is a "Living Example" of that fact. Her book is A Handbook of Cookery for a Small House...With a Preface by Joseph Conrad. It was published in 1923, and the health magic of her cooking must have run out soon thereafter as Mr. Conrad ceased to be a "living example" the following year. Item 75. £250 (US $305).

Here is a broadside recounting a bit of dirty laundry between a "lady," who seems not to have been much of a lady, and her cook. The heading reads Curious Charge at Marlborough-st. Between a Lady & Her Cook, Concerning a Rump Steak... It was reprinted from The Observer in 1818. The lady was the Hon. Mrs. Ferguson, her cook Elizabeth Creswell. Ms. Creswell had purchased a rump steak for Mrs. Ferguson larger than the latter wanted, explaining that the error was the butcher's. Evidently, that did not convince the Lady as she flew into a rage, throwing the steak at her cook, pinching and scratching her, and throwing her downstairs. She also called the cook a "filthy impertinent wench." This is not the best way to treat the help. Ms. Creswell sued her boss, with the case being settled out of court. Item 59. £400 (US $488).