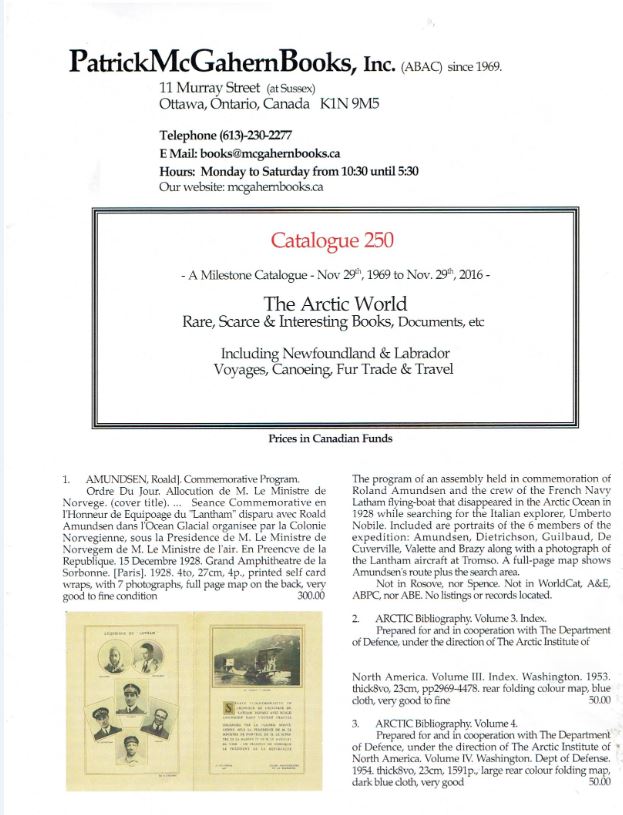 Patrick McGahern Books has released their Catalogue 250, The Arctic World Including Newfoundland & Labrador, Voyages, Canoeing, Fur Trade & Travel. This is a milestone catalogue for McGahern, whose first dates back to 1969. This is an appropriate catalogue for winter, as much of the territory covered by the books herein are from the land of endless winter. Intrepid adventurers braved the elements to explore these distant and often barren lands to bring these books to us. We can be grateful to be able read about, rather than experience, these intemperate climes. Here are a few samples.

Item 22 recounts one of the innumerable futile attempts to locate a Northwest Passage from the Atlantic to the Pacific north of Canada. The book is A Voyage to Hudson's-Bay, by the Dobbs Galley and California, in the Years 1746 and 1747, for discovering a North West Passage... This exploration was captained by William Moor, while the author of this 1748 account was Henry Ellis, the mission's hydrographer and surveyor. A century earlier, several such expeditions were attempted without success. Thomas James came back to report that no such passage could exist from Hudson Bay. The result was that attempts to locate such a route ceased for a century, only to be started again in the next century. Moor's expedition returned with the same conclusion as James – that no such route existed. It would halt most explorations for another century, when the British again began numerous searches for a passage, except this time through a route farther north than Hudson Bay. Ellis does provide much information about the still little known Esquimaux natives and other subjects of natural history. Priced at CAD $2,200 (Canadian dollars, or approximately $1,645 U.S. dollars).

In the 19th century, explorations to find a Northwest Passage became more sophisticated. Late in the 18th century, James Cook attempted to find a passage by starting from the Pacific, to no avail. In the 1820's, the British decided to double their chances by sending ships from both the Atlantic and Pacific, hoping they would meet each other. In 1824, Franklin and Parry were sent out on separate expeditions to find the passage from the Atlantic. F. W. Beechey was sent the following year to meet them from the Pacific. Item 9 is a Narrative of a Voyage to the Pacific and Beering's Strait, to co-operate with The Polar Expeditions... This account was written by Captain Beechey and published in 1831. He had learned that Parry turned back, but that Franklin was still moving forward. Beechey awaited his arrival in Kotzebue Bay through the summers of 1826 and 1827, sending a smaller boat east to look out for him. Finally, in late August, winter approaching, he turned back. Neither knew that Beechey and Franklin had come within 160 miles of each other before Franklin, now moving forward very slowly and likewise apprehensive of coming winter ice, turned back. While the Northwest Passage was Beechey's main objective, he also visited Hawaii and numerous other Pacific islands, the California coast, and met John Adams, the last survivor of the mutiny on the Bounty, on Pitcairn Island. CAD $10,000 (US $7,480).

Once explorers had discovered new lands, the missionaries were never far behind. Here is a book with a title I will not attempt to pronounce: Jesusjb Krijstusib ajokertutingita piijariakarnerpangoningit. A Summary of Christian Doctrine. This is a religious text in the Inuit language. The Moravians set up a mission in Labrador in 1771. They are still active in the area. This book was published, maybe, in 1867. Item 48. CAD $300 (US $224).

This one is a bit of a head-scratcher. It is an insurance policy from The Manufacturers Fire and Marine Insurance Company of Boston to William Lewis in the amount of $8,000. Insured was the W. A. Farnsworth, a whaler plying the waters off Alaska. The policy covered the ship from August 1, 1877, to November 5, 1878. This policy was a good investment. At midnight on September 15, 1877, the Farnsworth hit a piece of ice 50 miles off the Alaska coast. Within 20 minutes, she sank. Fortunately, all the men were able to get into the lifeboats and were later rescued by another whaler. But, here is the mystery. The document is dated October 20, 1877. That's just over a month after the boat sank. What the? Perhaps it reiterated a previously purchased policy? Maybe the parties did not yet know of her fate? The latter is most unlikely by this time with the telegraph and Pacific railroad in operation. Item 7. CAD $250 (US $198).

When one challenges the elements in the far north there is always grave risk. Three men, led by John Hornby, took on those challenges in 1926, and all paid the ultimate price. Hornby had made many trips to the Arctic, including those where he took limited supplies for long stays, choosing to live off the land. That is what he did in 1926, taking his 18-year-old cousin Edgar Christian and Harold Adlard along. They settled into a cabin along the Thelon River in the Northwest Territories. They had expected to feed off the winter Caribou migration but missed it. The result was they ran out of food. All three died of starvation. Edgar Christian kept a diary, which he left behind. He was the last of the three to die, passing sometime after June 1, 1927. His diary was first printed in 1937 under the title Unflinching. A Diary of Tragic Adventure. Item 15 is a copy from the third printing in 1947. CAD $150 (US $112).