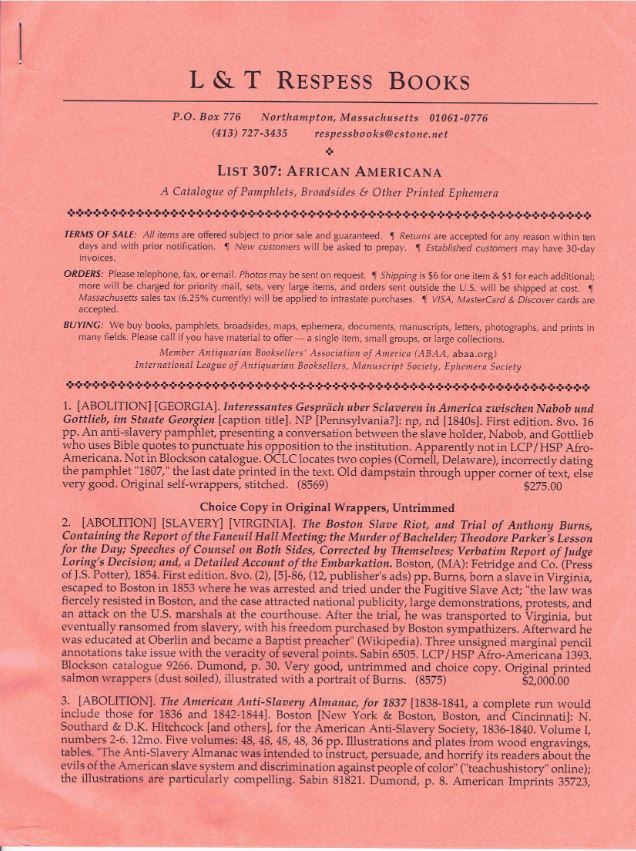 L & T Respess Books has issued a new catalogue of African Americana. The material comes from the 19th and 20th century, with a few Caribbean items but mostly from the United States. Unfortunately, America's history with its African Americans is filled with poor treatment, from outright slavery, to lynchings, segregation, and other forms of discrimination and cruelty. The result is that a catalogue of African Americana is filled with material related to these abuses. Other items are of a positive nature, describing accomplishments of the community, or promoting tolerance and equality. Even with these positives, they were created mainly to overcome negative stereotypes and bigotry that never should have occurred in the first place. Hopefully, some day we shall overcome all of this, but it is our history, so here are some of the items that arise from that past.

There is not likely any single document more important in African American history than this one, the Emancipation Proclamation. The freeing of the slaves did not eliminate all the other issues associated with racism, but at least black people were free to move away from the worst conditions, and live their lives in relative privacy. President Lincoln issued the proclamation in September of 1862, to apply on January 1, 1863, to those states in rebellion against the Union. Item 34 is a copy of the proclamation, titled By the President of the United States, a Proclamation. This is the fifth separate printing of the proclamation, by the Adjutant General's Office, on January 2, 1863. Priced at $1,250.

Freedom was an important step, but it did not stop those with hate in their hearts from hating. Here is a broadside from a city commissioner candidate in Mobile almost a century later, in 1957. The broadside screams, White Supremacy Now and Forever Excerpts from a Speech Made by E. C. Barnard... Barnard claims, "Regretfully there are many within our borders who would like to tear down our way of life, and make us subservient to Communist rule and Black Damnation...there are those who would preach or condone integration of the races, which would eventually lead to social equality, inter-marriage, and the destruction of our white civilization...pull the lever for Barnard and White Supremacy." Happily, Klansman Barnard lost to a racial moderate, as Mobile managed to mostly avoid the violence and extreme intolerance that plagued Birmingham, Montgomery, and notably, Selma. Item 13. $600.

At other times, African Americans found themselves forced to accept unequal treatment as the lesser of two evils to physical violence. Here is a broadside headed, The Price of Peace and Good-will. Once it was a Cow, now a Mule and an Automobile, circa 1930s or 1940s. It comes from Laurence C. Jones of the Piney Woods Country School in Piney Woods, Mississippi. A speeding car driven by a white man had crashed into one of their cars, badly damaging both. The white man jumped from his car, pistol in hand, and demanded they repair his car or he would "kill every ---- n----- in Simpson County." Jones explains that though they are in the right, "it would not do to take it to court." Though unreasonable for them to have to pay, he says, "but to continue in friendship and peace it is the only way out." The broadside was printed to raise funds to pay off the driver. Item 67. $250.

This next item is something positive, a movie broadsheet handbill from 1926. Produced by the Norman Studios, it promotes "The Flying Ace." Thrills! Action! Punch! A Super Feature, with an all-star Colored Cast. Norman Studios produced eight silent full length films using all black actors, promoting a positive image. In this film, the "Flying Ace" is a black World War I hero that becomes a detective for a railroad who solves a mystery involving a stolen payroll. Norman Studios in Jacksonville produced films from 1920-1928, but did not survive the talking era. As was generally the case in those days when it came to promoting positive images for African Americans, the studio was owned by a white man. In this case, it was Richard Norman, who began producing shorts featuring white actors. His move to black films was inspired not merely because he saw an economic opportunity (though he did), but because he deeply believed blacks were unfairly portrayed, both in life and in films. Item 24. $225.

Albion W. Tourgée was also a white man, but one with very strong ideals. He was a Radical Republican, a lawyer who unsuccessfully litigated against segregation in the Plessy v. Ferguson Supreme Court case. That was the one that upheld the doctrine of "separate by equal," overturned by that court in the 1954 desegregation case Brown v. Board of Education. Item 26 is titled, The National Citizens' Rights Association. This piece provides "A statement of the credo and goals of the National Citizens' Rights Association and a call for both African Americans and whites to join in." Published in 1892, Tourgee not only sought to provide help for African Americans from sympathetic whites, but to involve black people in the process itself. Tourgée saw the Republican Party as turning from its interest in black equality to supporting business interests, and hoped to provide a new force for equality. His organization gathered a large membership, 250,000 black and white at its height. However, Tourgée was not otherwise a very effective leader and the organization foundered a few years later. Still, it did lead to a similar, but more effective and long lasting organization in the early 20th century – the NAACP. $8,500.