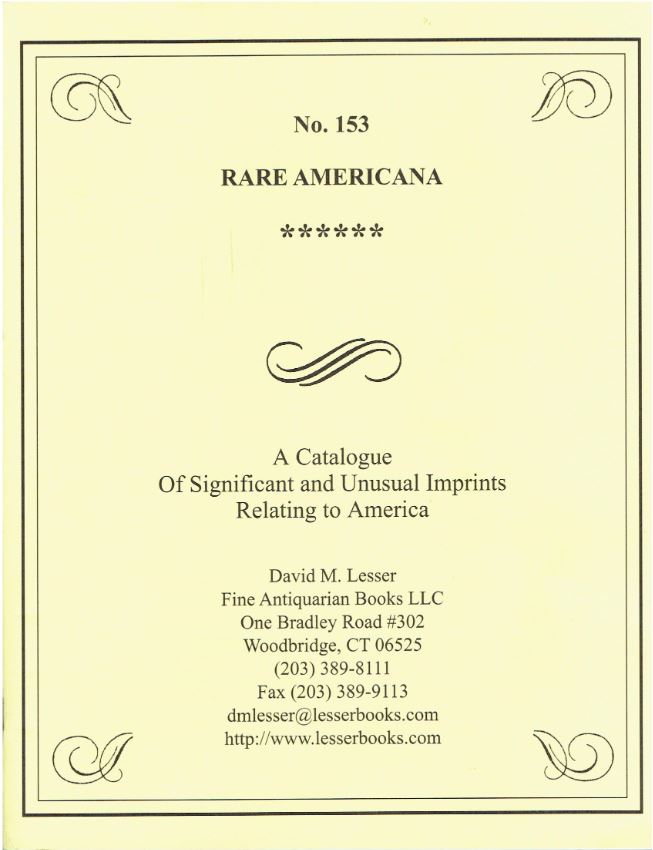 David Lesser Fine Antiquarian Books has created their Catalogue 153 of Rare Americana. Offered is a new collection of books, pamphlets, manuscripts and other forms of works on paper pertaining to America. The great majority of the items come from the 18th or 19th century. Beyond that, the topics vary, though the Revolution, Civil War, and the battles over slavery leading up to the Civil War are frequently found. Politics and theology are favorite subjects. Here are a few of the pieces within this new catalogue.

Considering the high level of sexual scandal that permeated our most recent presidential election, this is a good time to look back and realize this was not a first. They weren't keeping polls in 1884, but perhaps that would have rivaled 2016 for unpopularity of the candidates. Certainly, the Republican nominee was not well liked, a man with a reputation for selling political favors. His opponent, Grover Cleveland, seemed a likable enough fellow, but his sex scandal must have damaged his reputation. During the campaign, it was revealed that Cleveland had fathered a child out of wedlock. As this pamphlet from that election year demonstrates, the Republicans quickly made use of this scandal to balance their own candidate's shortcomings. It is entitled, "Tell The Truth." Or The Story of a Working Woman's Wrongs. Cleveland's friends depicted the wronged woman, Maria Halpin, as a "working woman" of the wrong sort. Cleveland maintained he acknowledged paternity because he was single, while his friends, who also enjoyed the lady's favors, were married. Ms. Halpin, on the other hand, maintained that Cleveland had pursued her, and at one point, despite her vehement protestations, forced himself upon her. The child was named Oscar Folsom Cleveland, after Cleveland's friend Oscar Folsom. Cleveland paid some money, the child was placed with an adoptive family and disappeared (a recent book claims that he changed his name and was a Buffalo gynecologist who died in 1947). Ironically enough, many years later, Cleveland married Oscar Folsom's Daughter, Frances. This pamphlet pronounces, "The Libertine is a foe to the home, and is, therefore, in a certain sense, a traitor to the republic." This line of reasoning was not applied during the most recent election. And while Cleveland did not have to deal with tape recorders, there were prying eyes. The pamphlet explains, "An officer long on the police force declares that he has often seen Mr. Cleveland beastly drunk, and has indisputable evidence of his habitual immoralities with women." Despite all of this, the electorate decided habitual immoralities with women were preferable to habitual immoralities with money and elected Cleveland anyway. Item 11. Priced at $450.

Cleveland never faced these allegations in court, so we can't render a verdict on their accuracy. Dr. James H. Campfield was not so lucky. Item 35 is a jury oration by attorney James S. Ewing in the case of Fanny L. Cavalry vs. Jas. H. Campfield (the printed document stated 1885 but was hand-corrected to 1881). Arguing for this "orphan girl," Ewing claims, "that the defendant took advantage of her helplessness, and while in a state of insensibility, produced by some hellish drug, without her consent or knowledge, had sexual intercourse with her, which resulted in her pregnancy..." He continued, "These treatments were repeated three times." Sort of like those vaccines that require a couple of booster shots. The jury agreed with Ewing, and awarded Ms. Cavalry $50,000, an enormous sum of money at the time. $500.

Item 44 consists of two letters written by John Gifford of Rochester, New York, to John Cole. The second, dated January 11, 1837 (an error, meant to be 1838) contains some interesting observations. He writes, "...our city for the last month has been filled with war and rumors of war. Meetings every night to get recruits for Navy Island, Col. Woods Regiment of the Artillery left here on Saturday for Buffalo to guard the frontier..." Rumors of war? In western New York in 1838? This would have been the short-lived, unsuccessful Canadian rebellion. In late 1837, William Lyon Mackenzie led a rebellion in Upper Canada (Ontario) against British rule. It attempted to take advantage of a similar rebellion going on in Quebec. The British were up to the task of taking on both. Mackenzie's forces were quickly overwhelmed, fleeing to the Navy Island mentioned in Gifford's letter in the Niagara River, where he proclaimed the Republic of Canada. While the rebels never got much traction in Canada, they did gather sympathy across the border in America, memories of her own successful rebellion against the British still relatively fresh. The situation was exacerbated when the British captured an American boat, the Caroline, which had been supplying the rebels. One American was killed, the boat set afire and pushed over the falls. Americans were incensed, hence the preparation for war about which Gifford writes. It was short-lived. Two days after the letter was written, Mackenzie and his men were forced to abandon Navy Island, crossing into America for safety, where they were imprisoned for violating the Neutrality Act. $175.

The North Carolina legislature updated the Laws of North Carolina. At a General Assembly, Begun and Held at Newbern... The year was 1794 and the state was preparing its defenses. It ceded land to the United States for a fort at Cape Fear, and at Cape Hatteras for a lighthouse. It passed a detailed Militia Act, enrolling "all free men and indented servants, citizens of this State, or the United States." However, it did exempt "all Quakers, Moravians, Dunkards, or Menonists," along with state and federal officers and "Ministers of the gospel of every denomination that are properly and regularly ordained, having the cure of souls." Item 83. $1,250.

Lesser has several early cigarette cards featuring black boxers. These came in Hassan Cork Tip Cigarettes The Oriental Smoke, part of a series issued around 1910. Hassan's cards featured not only boxers and other notable athletes, but Indians, actresses, lighthouses, and more. Apparently, card stock had been used to prevent the packs from crushing, with cigarette makers later realizing they could print something on the cards to generate greater interest and sales of their brands. Considering the controversy surrounding black heavyweight champion Jack Johnson, who appears on one of these cards, it seems likely that packs with black figures on the cards were targeted for the African-American market. Most Hassan cards feature white personalities. Hassan was a cheaper Turkish blend, advertising itself on the cards as "the largest selling brand of cigarettes in America." That sounds a bit aggressive, but perhaps it was referring to the American Tobacco Company, which produced the Hassan brand and many others. A later advertisement for Hassan is a bit more specific, calling it "the biggest selling 5¢ Cork Tip Cigarette in America," a less encompassing claim. David Lesser offers cards for Jack Johnson (2), Joe Gans, Joe Jeanette, and Sam Langford. $175-$200 each.