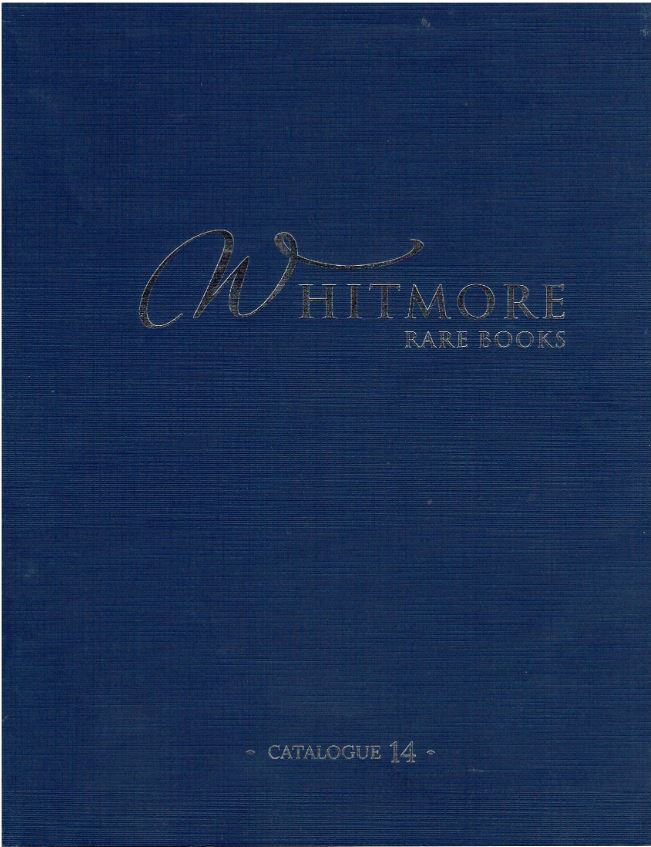 Whitmore Rare Books has published their Catalogue 14. Whitmore features literary classics, with quality of condition of primary importance. Most of the books would be described as fiction, though there are subsets within, such as numerous children's books, along with plays and poetry. A few reach outside of the categories of fiction, such as Plato, Thoreau, Audubon and Jim Thorpe. Here are a few selections from the 89 classics offered in this newest Whitmore catalogue

Speaking of Mr. Thorpe, many people consider Jim Thorpe the greatest athlete of the 20th century. Considering the potential names on that list, such a consideration is an amazing honor. Thorpe was a Native American, highly uncommon in the field of sports, particularly a century ago, whose all around athletic skills were phenomenal. Naturally, he had to deal with a fair amount of racial discrimination along with the challenges faced in competition. He would play professional football, baseball, and basketball, but his greatest achievements came at the 1912 Olympics where he captured the decathlon and pentathlon. Item 64 is Jim Thorpe's History of the Olympics. It was published in 1932 and contains the official stamp of the Olympics Village in Los Angeles. This copy was signed by approximately 50 of the athletes who participated in the 1932 Olympics, as well as Jim Thorpe himself, who dated his signature July 23, 1932. Priced at $6,500.

There are few American novels that have such status as classics as this one. Item 60 is John Steinbeck's The Grapes of Wrath, published in 1939. It is the all-too-real fictional account of the Joad family, who make their way from the Dust Bowl of Oklahoma to the difficult life of farm laborers in California during the Depression. It served as a notice to America of the desperate conditions many of its laborers and farm workers faced. The book was the best selling novel of 1939 and was a major factor in Steinbeck's winning the Nobel Prize in 1962. The year after it was published, it became one of most honored films as well, with Henry Fonda in the lead role. This copy is not only in near fine condition, but is also an uncommon inscribed one. Steinbeck inscribed it to Barrett Kiesling, who built a sizable collection of inscribed first editions. Kiesling was for twenty years the Publicity Director of MGM and wrote a book about films (Talking Pictures). A few of Steinbeck's books were made into films, explaining the contact between Steinbeck and Kiesling, who knew many of the notable Hollywood personalities of the era. $22,500.

Next up is another inscribed book, with a Christmas card which explains the very friendly inscription by Truman Capote to someone he evidently did not know. The book is One Christmas by Capote, published in 1983 (first trade edition). The recipient was Richard Boolootian, who not only was unfamiliar to Capote but unfamiliar to me as well. I'm not sure who he was. Here is the inscription: "for Dick, who is very special – please look after my dear little Joanne for me, love, Truman." Joanne was entertainer Johnny Carson's second wife. The marriage did not end well. For the next decade, Joanne Carson and Truman Capote became very close friends. He eventually moved into her home, where he died in 1984. On the Christmas card, Joanne Carson writes to Boolootian, "While Truman was here in August signing his Christmas books, he asked me who were the people that were very special to me. He signed this book for you." Carson signed the card "Joanne" after drawing a heart in red. Item 6. $1,000.

This next title is a children's book that ended up being one of the more controversial titles of the twentieth century, though its author could hardly have imagined that would be the case. Published in 1899, the book is The Story of Little Black Sambo, written by Helen Bannerman. She could have avoided the controversy if only she had not chosen to mention the boy's skin color. Bannerman was a Scottish lady who married a physician who worked in the Indian Medical Service. She moved with him to India, where they resided for many years. It was while she was there that she wrote about Sambo, who was actually an Indian boy, not an African one. It is the well known tale of Sambo's being chased by Tigers, giving them his clothes to spare his life, whereupon the tigers fight over who looks best and eventually chase each other until they turn into something akin to pancake mix. Sambo is depicted as a clever hero, and Bannerman's illustrations were not offensive. Unfortunately, the book was regularly pirated, and frequently illustrated in America with stereotypical, demeaning images of black people. The result was the name "Sambo" came to be a derogatory term for blacks, with Bannerman's tale considered a racist portrayal. If only she hadn't specified his skin color... Item 2. $5,750.

This book has a rather pedestrian title for one of such great significance: A Yankee in Canada, With Anti-Slavery and Reform Papers. It is a collection of essays by Henry David Thoreau, edited by Ralph Waldo Emerson and other of Thoreau's friends, published in 1866, four years after he died. Among the essays Thoreau describes a journey to Quebec and what he found, but that is not what makes this collection important. Rather, it is an essay entitled Civil Disobedience, previously published in a magazine but here for the first time in book form. This essay espouses Thoreau's view that when government orders are wrong, they should not be blindly followed. Rather, we should follow our conscience, and disobey when necessary. This is not only true with despotic governments, Thoreau maintains, but with democratic ones as well, as the majority can still be wrong. Thoreau would apply his principles when he refused to pay his taxes as, at the time, they were still be used to enforce slavery. He was briefly jailed until friends paid them for Thoreau. The principles Thoreau here described would become an inspiration for some of the greatest leaders in the years ahead, including Gandhi and Martin Luther King. Item 63. $2,500.