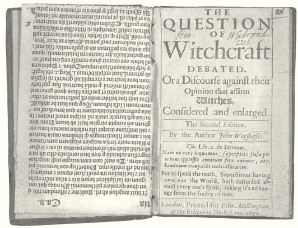 
If the latter half of the 17th century was a time of foolishness and hysteria, there was one voice of reason. In 1671, John Wagstaffe published his, The question of witchcraft debated. Or a discourse against their opinion that affirm witches, considered and enlarged. In 1669, Wagstaffe had published his original edition of "The Question of Witchcraft Debated." This work was attacked in a 1670 book called, "The Opinion of Witchcraft Vindicated." That led to this 1671 expansion of Wagstaffe's original work, plus a necessary defense against charges that his questioning claims of witchcraft established that he was an atheist. In his book, Wagstaffe states that belief in witchcraft is based on "the knavish and gainful impostures of some men," and the "vain foolish credulity and frightful fancies of other men." His opinions did not exactly make Wagstaffe a popular man in his lifetime, but his book would be reprinted twice in the 18th century when witchcraft claims were finally being debunked. Item 117. £1,000 (US $1,795).

In the 17th and 18th centuries, "bills of mortality" were kept for London and surrounding parishes. These weekly reports may have been the first systematic attempt to keep track of the causes of death, valuable medical information. However, they were not entirely scientific. Generally, they were compiled by some poor person, frequently an old woman, desperate enough for pay to go to the homes of people who had just died and ask the cause. As the reports show, the next of kin did not always have an accurate understanding. Among the causes were headmouldshot, horshoehead, lunatick, purples, rising of the lights, St. Anthony's fire, water in the head, and the quite frequent griping of the guts. The most common cause was convulsion, with fever, consumption and age all vying for second place. For those who avoid the dentist, many deaths were attributed to the deceaseds' teeth, and five died of worms. The copy of this report can be seen on the image of the cover of this catalogue which appears on page one of this article. Item 85 is the report of April 24, 1722. £1,250 (US $2,243).

One of those deaths was attributed to drowning in the River Thames. This would certainly not have been an issue in the middle of the winter of 1715-16. That was one of those rare cold winters where the Thames froze solid. In those rare years, an event known as the "Frost Fair' took place. Dancing, drinking, eating and other festivities would be arranged on the frozen river. A mobile press was dragged onto the ice in 1716 and this broadside celebrating "the wonders of this icy year" was printed. Other notable freezes occurred in 1683-84, 1739-40, and 1813-14, when the last Frost Fair was held. Item 41. £1,500 (US $2,693).